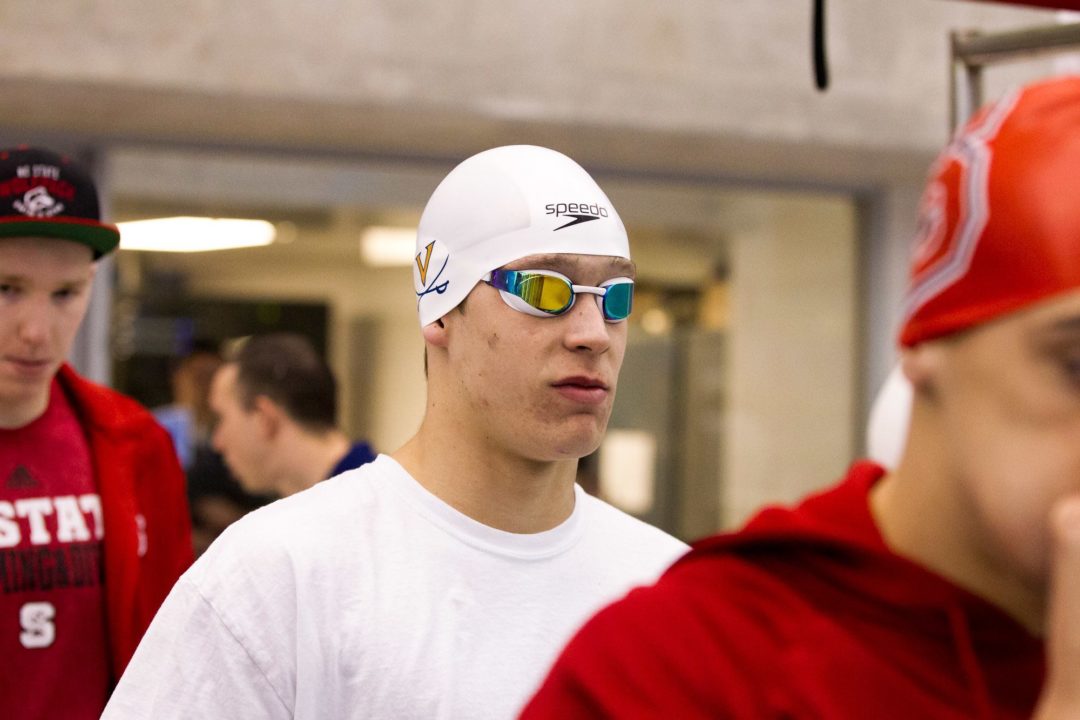 All-American Nick Alexiou is one of two sophomores who have decided to transfer from Virginia. Archive photo via Tim Binning/TheSwimPictures.com

Two members of the men’s swimming & diving team at the University of Virginia will transfer.

Sophomores Chris Webb and Nicholas Alexiou have both left the program, they confirmed on Sunday. They both will be seeking to transfer to other schools that they think will be a better fit for them.

Both swimmers are middle-to-distance freestylers; at last year’s ACC Championship, Webb scored 29 individual points, including a 5th-place finish in the 1650 yard freestyle.

Alexiou had an even bigger impact, scoring 30 points individually including a 3rd-place finish in the 200 free. He also led-off the ACC Champion 800 free relay, and anchored Virginia’s 400 free relay. He went on to qualify for the NCAA Championships, placing 37th in the 500 free, 27th in the 1650 free, and earning Honorable Mention All-American honors on Virginia’s 13th-place 800 free relay.

Webb and Alexiou were among the eight student-athletes suspended for Virginia’s season-opening meet against Navy for an undisclosed violation of team rules. Nobody that we spoke with gave any indication that his decision to leave was specifically related to that.

A request for comment from the Virginia coaching staff on Sunday went unreturned as of posting.

Augie Busch is in his first year as the head coach of the Virginia men’s and women’s programs.

Why do some college athletes waste great opportunity?

I know Nick he is on to top picture. Parker Camp is the second picture

they changed the picture after the initial posting. At first, story waas posted with a picture of Parker Camp not the current one of Nick.

Augie isn’t putting up with poor behavior. High standards for all.

Nice positive spin, Wahoo Strong. Losing your top recruit to Florida after Bernardino was fired must have been part of the plan too.

You all are about to get slapped down from your perch. I hope you are ready to spend the next decade looking up at Carolina.

Frank – I’m not sure its UNC they’re going to be looking up at. Did you see ACC’s last year??

ACC Championships under Augie are, how can I say this, not something they are remotely concerned about. Yes, they wouldn’t want to be embarrassed… which they likely now will certainly be, but winning ACCs is of no consequence to Augie. UVa will be looking up at many more teams than just UNC or NCSU. There’s an NCAA pipedream they are under a delusion they can attain.

Let me see, do I want to win ACCs or do well at NCAAs. Hmmm, when should we rest and taper the kids. Hmmm, last year Tenn beats UGA at SECs and look at what UGA does in the NCAAs. I wonder what is important to UGA. There are a lot of good teams in the ACCs, Louisville, VT, ND, why single out UNC or UVA. And really who cares who wins ACCs, SECs or any conference. My prediction is UVA to be in top 10 at NCAAs. You heard it here first!

I agree, NCAA’s is much more important than any conference meet. But I really don’t see UVA getting top 10 at NCAA’s this year…..or next. sorry!

No one takes NC State seriously in anything. I can’t remember your last ACC title in any sport. Try winning something, anything really, then come back and talk. Enough said.

I have to agree with Frank Rockwell. I think UVA’s winning ways departed along with Bernardino, but I also think they were likely headed in that direction anyway. UNC is quickly re-establishing itself as the ACC powerhouse under DeSelm, and NC State is close behind. UNC is, and always has been, a class act, which will always stand the test of time. It seems like the drama and tom foolery at UVA is finally catching up with them. The tail has been wagging the dog up there for years, and that program was headed down the mountain like a rocket sled on wheels. I just hope that Augie can bring some class to the program. Right now it is like… Read more »

“I just hope that Augie can bring some class to the program” The implication is then that the program had little to no class under MB. I think you have this backwards.

As far as “that program was headed down the mountain like a rocket sled on wheels” – I do think there is much more parity in the conference than ever. But I’m not sure UVa was falling at the rate you think but rather the entire conference is much better. But, when you have 27 championships, I guess that’s a tall mountain MB built!

All I can say is, I’m glad that UVa turmoil is bringing such joy to the non-UVa faithful.

Bobby D and the rest of the people who are continuing with this praise of UNC and NC State….lets not forget who got 2nd last year at ACC’s on both the men and women’s side….Virginia Tech. UNC and NC State have great programs and will definitely be in the mix for the ACC title, but I think Virginia Tech is deserving of a little credit, especially after having beaten both UNC and NC State this season in dual meets. It will be a tight race at the end of the year.

“UNC is quickly re-establishing itself as the ACC powerhouse under DeSelm”?

you do realize DeSelm has been there seven years, correct?