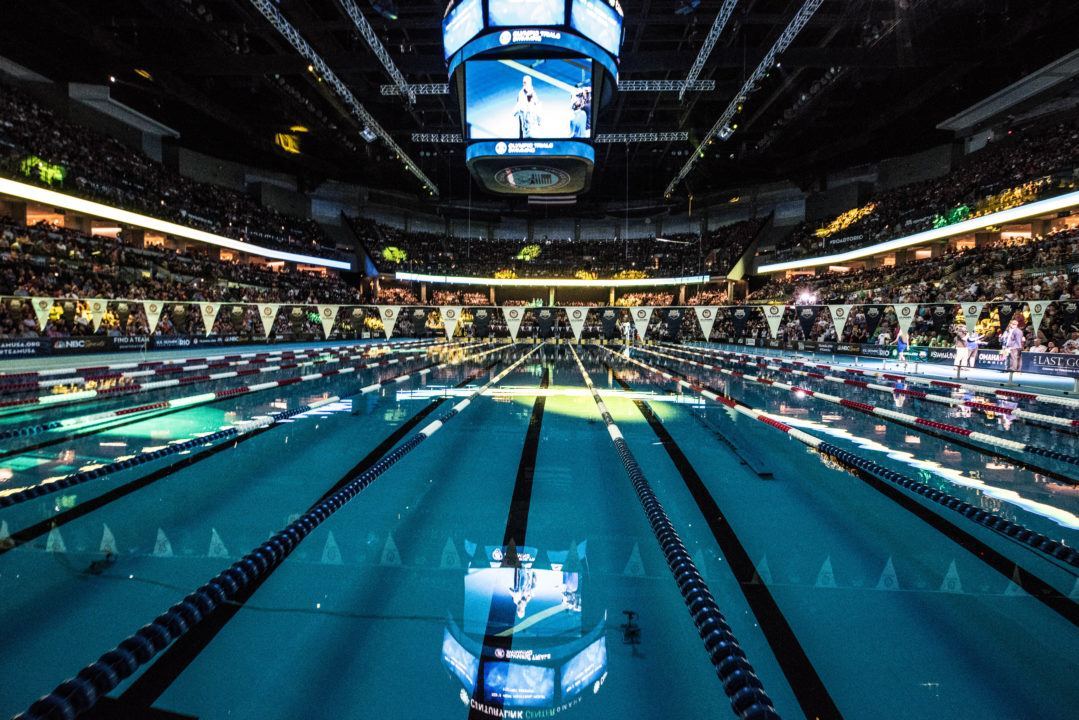 Jonathan Tang of Sooner Swim Club and Micah Chambers of the Aquatic Club of Enid both achieved their first Olympic Trials cuts in the 50 freestyle. Stock photo via Mike Lewis/Ola Vista Photography

With only two more weeks left to qualify for the Olympic Trials, Micah Chambers of the Aquatic Club of Enid and Jonathan Tang of Sooner Swim Club both punched their ticket to Omaha during the Jenks Trojan Swim Club’s Aloha Meet.

Ben Himes and Jonathan Tang also opted for the intermediate swim approach, which is not uncommon in the swimming world. Especially in a race as technical and millisecond-oriented as the 50, there could be some advantage to the intermediate split strategy, such as having cleaner water. Last week, Brendan Cline of Franklin and Marshall also secured a 50 free Trials cut in an intermediate split after initially missing the 50 free event.

Dropping a half-second from his 50 free the day before, Chambers split a 22.79 and secured his Trials cut by a wide margin. Chambers was entered in the meet with a 23.62, so his overall time drop was roughly .8 seconds. His new personal best of 22.79 is not only well under the Wave I Trials cut of 23.19, but nears the Wave II Trials cut of 22.71.

A one-time University of Missouri commit, Chambers just completed his freshman season at the University of Tennessee. At the SEC Championships, he placed 11th in the 50 free.

Jonathan Tang earned his Trials cut with an intermediate cut in the 100 freestyle. He touched in a 23.04, besting his entry time of 23.39 and achieving his first Trials cut.  Later that day, Tang swam the 50 again in the men’s 50 freestyle event, but finished in a 23.53. He is committed to swim for University of Chicago next fall.

Both men swam the 100 fly, dropped time, and placed in the top-four. Chambers took second with a 55.07, improving on his previous best time by 1.4 seconds. Tang placed in fourth with a time of 55.98 and also shaved 1.4 seconds off of his best time.

The #1 class of 2021 recruit Aiden Hayes swum in the meet, but scratched two of his five events. Hayes is already qualified for Trials in multiple events, and did not earn any new Trials cuts at the meet.

Regardless, he still dominated the fly events, placing first in both the 100 and 200 fly. His time of 54.23 in the 100 fly won the event by just under a second, and his time of 2:05.81 was 13 seconds faster than any other competitor at the meet. Hayes is committed to swim for NC State beginning next fall.

Ben Hines of Berzerker Swimming, who is committed to swim for the University of Alabama as part of the Class of 2025, swam the 50, 100, and 200 free, and 100 fly at the meet and dropped in nearly all of the events.