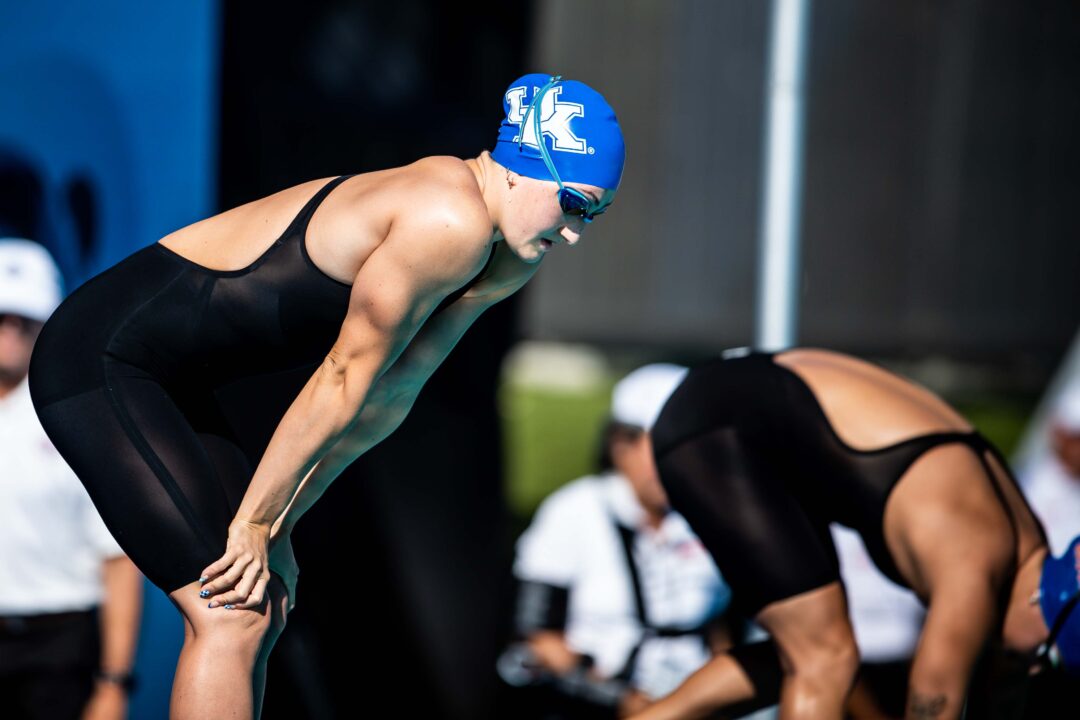 Gati and Knight have qualified for NCAAs in each of their three (four) years at Kentucky. They combined for 124 points at 2022 SECs. Archive photo via Jack Spitser/Spitser Photography

2022 individual NCAA qualifiers Izzy Gati (swimmer) and Kyndal Knight (diver) will be returning to Kentucky to use their COVID-19 fifth year.

Gati has spent the last four years at a Wildcat. This past season, she helped Kentucky to a second place finish at SECs. She finished ninth in the 500 free, 10th in the 200 fly, and 17th in the 100 fly scoring a total of 46 individual points. That made her the eighth highest scorer on the team.

Gati had a big season in 2021 as she finished eighth in the 200 fly and ninth in the 100 fly at NCAAs. Notably, she was the fourth seed heading into the 2020 NCAA Championships that ultimately got canceled due to COVID-19.

Also returning for a fifth year is diver Kyndal Knight. Knight scored 78 points at SECs finishing third on the 1 meter and platform as well as sixth on the three meter. She was the team’s highest scoring diver and third highest scorer overall.

She went on to dive at NCAAs finishing 13th in the 3 meter and platform events as well as 16th on the 1 meter. She scored a total of nine points and was the only diver to score.

Notably, Knight has scored at all three NCAA Championships she has attended.

The return of both women is huge as the Wildcats finished second at SECs and 12th at NCAAs this past season. The team loses their highest scorer at SECs Riley Gaines as she graduated. Gaines also scored 18 individual points at NCAAs, the third most of the team. Also a huge loss was fifth year Bailey Bonnett who was the team’s second highest scorer at NCAAs.

The return is also huge as after winning the SEC title in 2021, Kentucky was only five points ahead of Alabama in 2022. Alabama has a long list of fifth years for this upcoming season including US Olympian Rhyan White, Kensey McMahon, Morgan Scott, Kalia Antoniou, Ashley Voelkerding, and Cat Wright. Notably, those six combined for a total of 354.5 SEC points. Gati and Knight combined for 124 points for Kentucky.