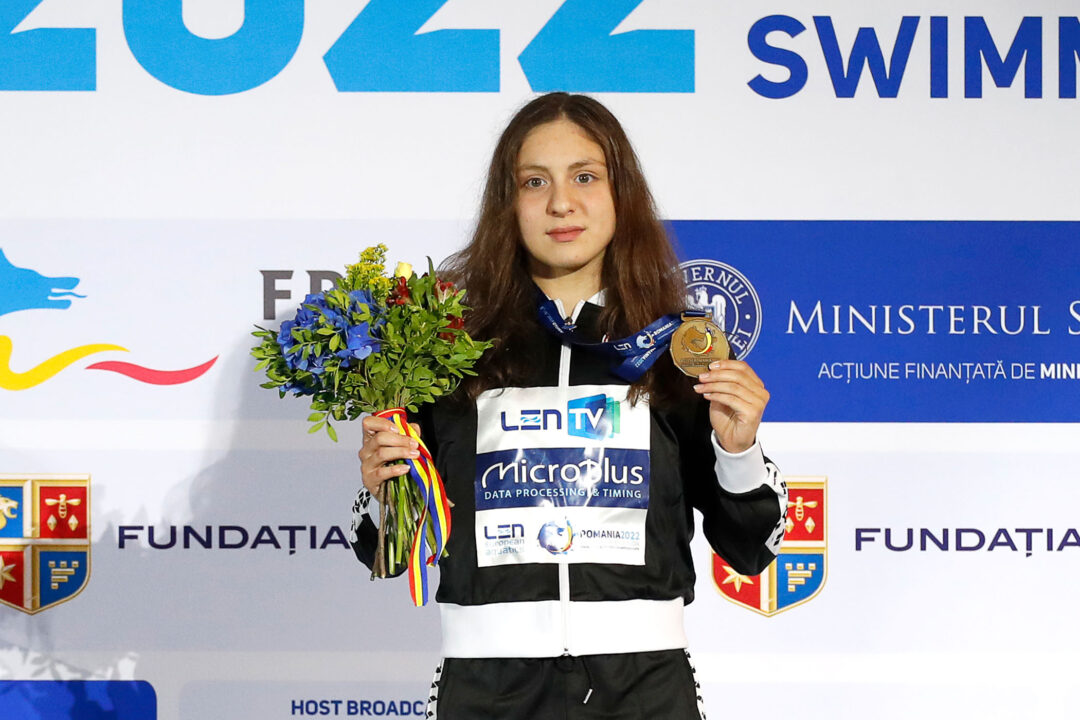 Turkey's Merve Tuncel will try to repeat as the European Juniors gold medalist across the 400m, 800m and 1500m freestyle events tonight in Bucharest. Current photo via Simone Castrovillari

The last day of prelims of these 2022 European Junior Championships saw just four races, however, the morning’s events helped set up another night of intense action.

17-year-old Tuncel is already a triple medal winner here in Bucharest, having won gold in the 800m and 1500m freestyle races, as well as earning bronze in the 200m free last night. The Turk completed the 400m/800m/1500m free treble last year, producing a time of 4:06.25 in the 400m, so she’ll try to accomplish the double-triple tonight in Bucharest, Romania.

The boys’ 400m free was also on this morning’s agenda, with Tuncel’s teammate Batuhan Filiz landing lane 4 in 3:53.15. That gave Filiz the edge over Hungary’s Daniel Meszaros who touched in 3:54.30 while 200m fly winner here Krzysztof Chmielewski earned the 3rd spot in 3:54.58.

Filiz is the defending European Juniors champion, having taken gold last year in a mark of 3:50.68.

Also lurking as the 4th seed for tonight’s final is Romania’s Vlad-Stefan Stancu, the 16-year-old who already wowed with a 15:05.47 1500m freestyle performance earlier in this competition in front of the home crowd.

On the relay front, both the girls’ and boys’ medley relays took center stage.

In the former, France took the top seed in the hopes of upgrading their silver from 2021 to gold this time around. This morning they produced a mark of 4:09.79 as the only squad under 4:10. Of note, Germany wound up not starting a team for the race.

France was also the quickest of the morning on the boys’ side, touching in 3:41.85, only holding a less-than-a-second advantage over 2nd seeded Poland. Croatia wound up getting disqualified while the Czech Republic did not start a team despite being entered in the race.