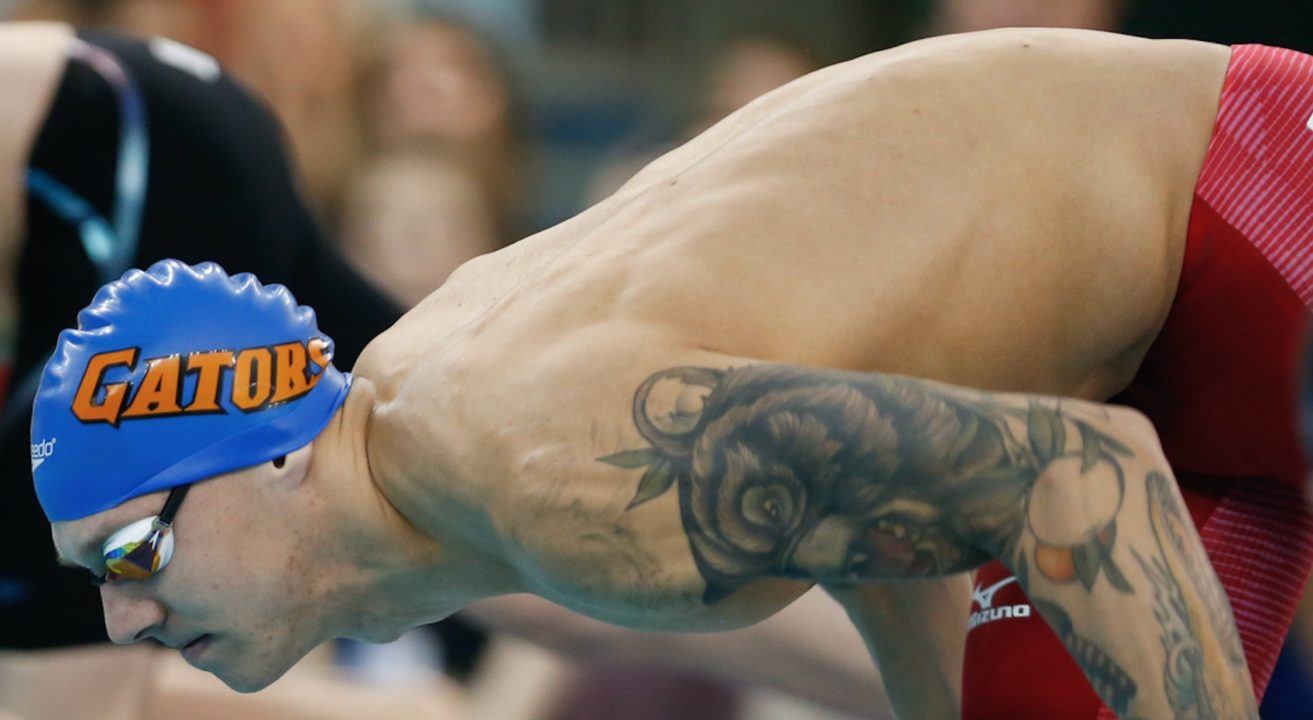 Get Your Swimming Feel For The Water Back With Aqua Knuckles

Swimmers and coaches will find using Aqua Knuckles at the beginning of workouts is best because swimmers have their best attention to detail at this time.

TritonWear and SwimSwam bring you the best in swimming race analysis for the 2018 Men’s NCAA DI Swimming and Diving Championships.  With the power of TritonWear, you can access 12+ metrics for all athletes simultaneously, display the results in real-time to unlimited screens on deck, and review later in an easy to use interface for monitoring progress and identifying trends over time. See all Tritonwear Race Analysis here.

The final day of the 2018 NCAA Swimming Championships featured another barrier-breaking swim by Florida’s Caeleb Dressel. After swimming below the 18- second mark on the 50 free and the 43-second mark on the 100 fly, he continued his streak on his last event, breaking the 40-second barrier in the 100 free with a 39.90, over a full second and body length ahead of the field.

Dressel’s speed and underwaters were unrivalled the entire race. Though there were a few dips in his metrics, none of his competitors matched his pace or his superior underwater technique and speed. His transitions off each wall served to reinforce his lead, and while he didn’t spend excessive time underwater, his breakouts were always at the farthest distance compared to the rest of the field.

Dressel’s strategy was to use a fast stroking speed instead of going for high stroke efficiency. Although his stroke rate slowed down in the middle 50, he still had the fastest stroke rate in all but the first lap.

While he maintained a consistently fast stroke rate, his DPS and stroke index weren’t as stable. They were in the higher end of the range in the first half of the race, but his DPS dropped significantly on the third lap. He produced the lowest DPS here and his stroke efficiency decreased by the largest margin compared to the rest of the heat. Still, he registered the fastest speed and split on this lap, thanks in part to his fast stroke turnovers.

Despite the drop in his stroke efficiency, Dressel burst through the final lap with increased speed, taking each stroke at a faster rate to pull ahead of his competitors even further.

Meanwhile, Indiana’s Blake Pieroni, using the same strategy as Dressel, went head to head with NC State’s Justin Ress using an opposing strategy for a podium finish. While Pieroni’s shorter, faster strategy served him well through the 75, out-splitting Ress and matching NC State’s Ryan Held for second at the 50. The transitions for these two men being nearly equal, the push for bronze came down to the reserved energy Ress had stored from his slower, but more efficient strokes. But Peironi had gone out too hard in that first lap, clocking the shortest time underwater and the most strokes on the field, 4 more than Ress. This strategy left him short on power in that final lap, forcing him to slow his rate where Ress was able to increase his enough to narrowly beat Pieroni for the bronze.

One concept that keeps presenting itself in this competition is the importance of proper pacing, even in sprint events. Dressel and Pieroni both had fast stroke rates, but while Dressel had enough energy to pull a faster stroke rate at the end and increase his speed, Pieroni didn’t have the same endurance to sustain his stroking speed through to the finish. If Pieroni works on increasing his pull on each stroke, decreasing his rate slightly, he may reserve enough power at the end to bring it home.

Another key learning in this event is the importance of a strong underwater strategy. If Pieroni could increase his time and distance underwater, especially off the dive, it would help him reserve energy for the end, by allowing him to take fewer strokes per lap. With this change he may have been able to retain enough power to push through that final lap, perhaps even with his faster stroking strategy, and hold on to the bronze.

That brings the 2018 NCAA Swimming Championships to a close. Next up is the Commonwealth Games. Stay tuned for that race analysis!