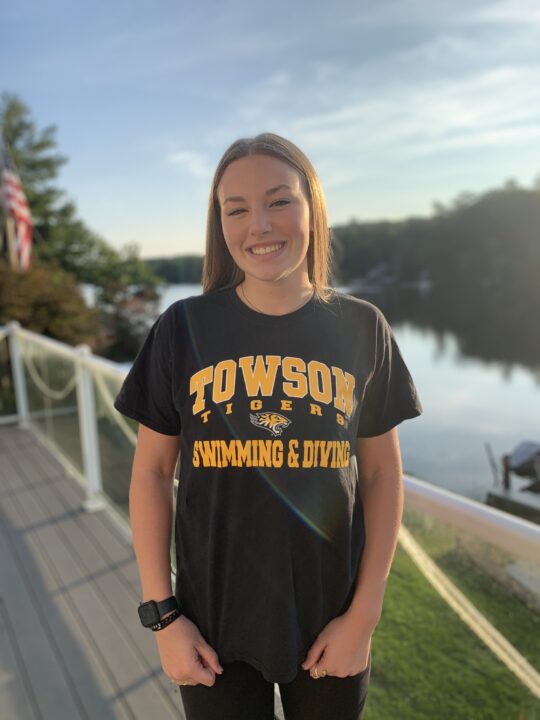 After qualifying for finals at the New York high school swimming and diving state championship meet just days ago, Ally Frame has announced her college decision, selecting to swim at Towson University. Frame is from Ballston Lake, New York where she is in her senior year at Burnt Hills Ballston Lake High School. She currently trains with the Schenectady-Saratoga Swim Club.

The Towson women are coming off a third-place finish at the 2021 Colonial Athletic Association Swimming and Diving Championships, falling behind only James Madison and William & Mary. The Tigers were led by sophomore Hailey Ritter, who was an A-finalist in the 50 free and 100 fly, as well as a B-finalist in the 100 back. In the 50 free, she took 4th, touching in a time of 23.29 in finals. She also added a 51.17 leadoff leg as part of the team’s 400 free relay that took 4th.

Frame has the potential to be a big contributor to the Towson team’s depth when she arrives on campus next fall. During the 2020-21 season, her best times would have ranked her in the top-8 of both the 50 and 100 freestyles. Her times in the backstroke events would have ranked her even higher on the team last season, with her 100 back being faster than all but one member of the team and 200 back being faster than all but two.

Towson has been one of the more notable mid-major programs in recent years, especially on the men’s side. From 2017 to 2019, the team was represented by Jack Saunderson at the NCAA Swimming and Diving Championships. Across those three meets, he appeared in finals on five different occasions, finishing as high as 6th in the 200 fly. Saunderson swam with Wolfpack Elite going into this summer’s Olympic Trials where he finished 24th in the 100 fly.