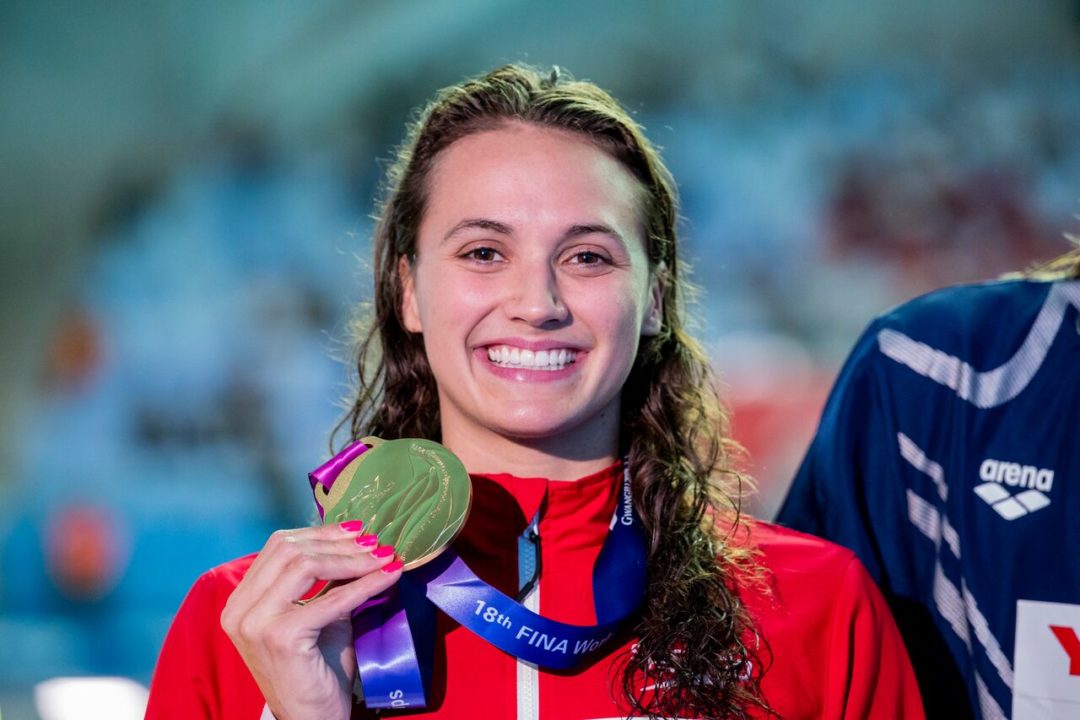 Kylie Masse is the first official signing of the Toronto Titans, one of two new franchises joining the International Swimming League for its second season. Archive photo via Swimming Canada/Joseph Kleindl

The Toronto Titans have announced Olympian Kylie Masse as the club’s first official signing for the upcoming season of the International Swimming League. The Titans were one of two new teams added to the league for the second season of the ISL, scheduled to start in September, which makes Masse the first Titan in history.

“I really enjoyed competing in the ISL last year and think it’s a great concept,” said Masse. “I am thrilled to sign with the first Canadian team in the league.”

Masse is the first of what general manager Robert Kent hopes will be plenty of swimming stars making the move up north for season two of the ISL.

“Kylie is a world champion, Olympic bronze medalist and former world record holder,” said Kent. “She is an excellent example of the level of athletes we’re recruiting to our team. We are very pleased to have Kylie on board. Currently we have made offers to several other top stars and will be developing a strong presence for the 2020 ISL season.”

Last season Masse competed for the Cali Condors, scoring 102.0 points over four matches to rank her 28th in the league overall and 15th among women. The Condors ended up finishing third in the ISL Final in Las Vegas.

The 24-year-old won the women’s 200 backstroke at both the Indianapolis and Naples stops and ended the season with a total of eight top-three finishes individually.

As mentioned by Kent, Masse won the 2016 Olympic bronze medal in the 100 backstroke before winning back-to-back world titles in the event in 2017 and 2019. The LaSalle native also won gold in the race at the 2018 Commonwealth Games and Pan Pacific Championships, and at those 2017 worlds, set the world record in 58.10 (which has since been broken).

The ISL is contested in short course metres, but they haven’t closed the door on racing long course in the future (this is why they left the 100 IM off the schedule).

The addition of two new clubs — one from Toronto and one from Tokyo — was first announced in December prior to the Las Vegas finale. The Titans then announced their team name on Tuesday after running an interactive campaign that encouraged fans to submit naming ideas across the ISL‘s social media platforms.

The Titans will certainly be looking to add more top tier Canadian talent to join Masse. A few prominent names from last season included Penny Oleksiak and Kayla Sanchez, who competed for league champions Energy Standard, Yuri Kisil and Sydney Pickrem, who were on the runner-up London Roar, Kelsey Wog, who was teammates with Masse on the Condors, and Markus Thormeyer and Emily Overholt, who competed for the NY Breakers.

Only one Canadian, Mary-Sophie Harvey, has signed with a different team so far this year, as the Quebec native returns to Energy Standard.

Wonder how much the swimmers get for signing?

The problem with these new teams is that they will just cluster and no one will be intertwined. Isn’t that the point of the ISL? To swim with people from other countries?

While swimming with athletes from other countries are a fringe benefit, I’m not sure that I’ve ever heard anyone at the ISL present them as a “point.” In fact, they’ve made a lot of efforts to give home countries every opportuniy to sign their home athletes and create true ‘home team’ feels.

I imagine that long term this will change, but for now, it seems that this is an important part of the business model to capture attention.

So this Kent guy started the team? He’s the one funding the team and paying athletes?

Not a bad way to start