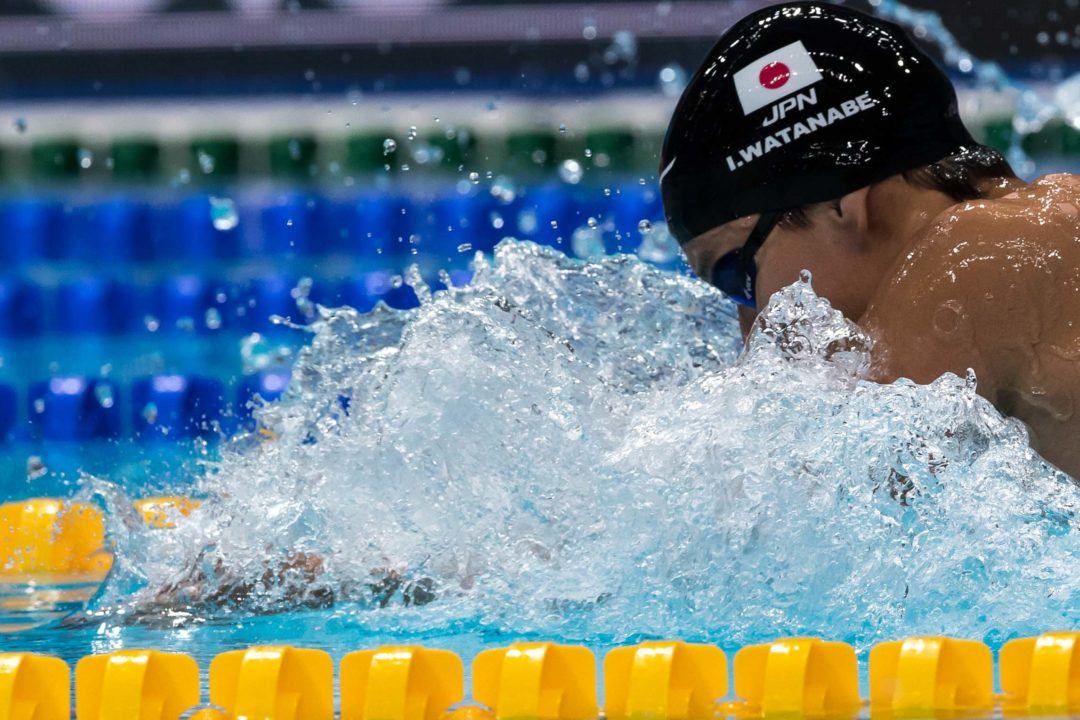 Check out the top 5 races to watch at this weekend's Japan Swim, an event known for furiously fast swims across the board. Archive photo via Mike Lewis/Ola Vista Photography

The 2020 Japan Swim originally scheduled for April of this year was set to be the nation’s sole qualifying opportunity for the Summer Olympic Games.

However, along with the coronavirus pandemic came the postponement and/or cancellation of sporting events around the world, including the Olympic Games themselves which are now set to being on July 23, 2021.

As we reported, Japan’s Olympic qualification timeline was adjusted in light of this new timeframe, which also moved the Japan Swim to December. It is now a non-qualifying competition, but an important racing opportunity nonetheless for Japanese swimmer to get some long course under their belts.

For many, this meet will be their first long course competition after having competed rapid-fire style in short course as members of the International Swimming League (ISL) team of the Tokyo Frog Kings. In its debut season, the Kings made it to the semifinals, but wound up 3rd place in their match behind winners Energy Standard and runners-up London Roar, thus seeing their season end.

As such, those not making it to the final as a member of one of the aforementioned teams or the other two competitors of Cali Condors and LA Current, are en route to their home bases with eyes on Tokyo 2020 (1).

Note: As we reported, the two-time World Champion from 2019 Daiya Seto is suspended from competition for the remainder of 2020.

Although Sato and Koseki recently raced in the ISL, they are both more formidable in long course, as is the national record holder Watanabe. In fact, all 3 rank among the world’s 10 best performers all-time, which signals the caliber of performance we may see this weekend.

Below are the threesome’s lifetime bests, world rank all-time and their most recent LCM times.

Although not stacked with as quite as high a level of eliteness, the women’s 200m breast is also set to be an entertaining race with the likes of Satomi Suzuki, Reona Aoki, Runa Imai, and Kanako Watanabe.

With little long course racing this year due to the coronavirus pandemic, Watanabe ranks as the fastest Japanese woman of 2020, having clocked a time of 2:25.05 in early November. However, Suzuki is the nation’s 2nd fastest performer all-time, owning a PB of 2:20.72 from the 2012 Olympic Games.

IM dominator Yui Ohashi is also trying the 200m breast on for size, as is her domestic IM rival Sakiko Shimizu.

Kosuke Hagino may have taken a 5-month hiatus last year to tend to his mental and physical health, but the newly-married dad of one is back with a vengeance in 2020. He was rendered nearly undefeated across the IM events as a Tokyo Frog Kings member but is set to take on many more events here, including this 200m free.

Hagino used to be the Japanese national record holder in this event before Katsuo Matsumoto snagged that claim en route to taking silver at the 2019 World Championships in Gwangju. The pair will go head-to-head as a preview of what may go down at the April Olympic Trials.

Keep an eye on teenager Konosuke Yanagimoto, however, as the 16-year-old who already hit a time of 1:47.85 this past fall will try to rain on the superstars’ parade.

Waka Kobori topped the podium twice in Naples at the 2019 World University Games (Summer Universiade), reaping the top prize in both the 800m and 1500m freestyles. Miyu Namba took silver in the 800m free at the 2019 World Junior Championships.

The pair are set to see who can get to the wall fastest in the shorter 400m free this weekend, with Namba owning a lifetime best of 4:08.37 while Namba’s PB equals 4:08.59. They rank as Japan’s 5th and 6th fastest performers ever.

Takeshi Kawamoto ended his inaugural ISL season as the male MVP of the Tokyo Frog Kings, partly due to his prowess in the individual men’s 100m fly, as well as the 50m fly skins.

Kawamoto will try to continue his speed here in long course against a marquis lineup of Japanese competitors, including Honda Tomoru, Nao Horamura, Shinnosuke Ishikawa, as well as Taiwan’s Eddie Wang.

Matsumoto is also set to make an appearance in this event, one in which he clocked a best time in 52.49 at the Chiba Prefectural Championships this past September.

Any way to get a sense of start times? I cannot read Japanese on the live stream page. TY

@CoachMike The prelims are staggered througout the day to avoid congestion; finals appear to begin at 5 pm local (about 3am Eastern), save for distance events.