The Training and Development of Mitch Larkin 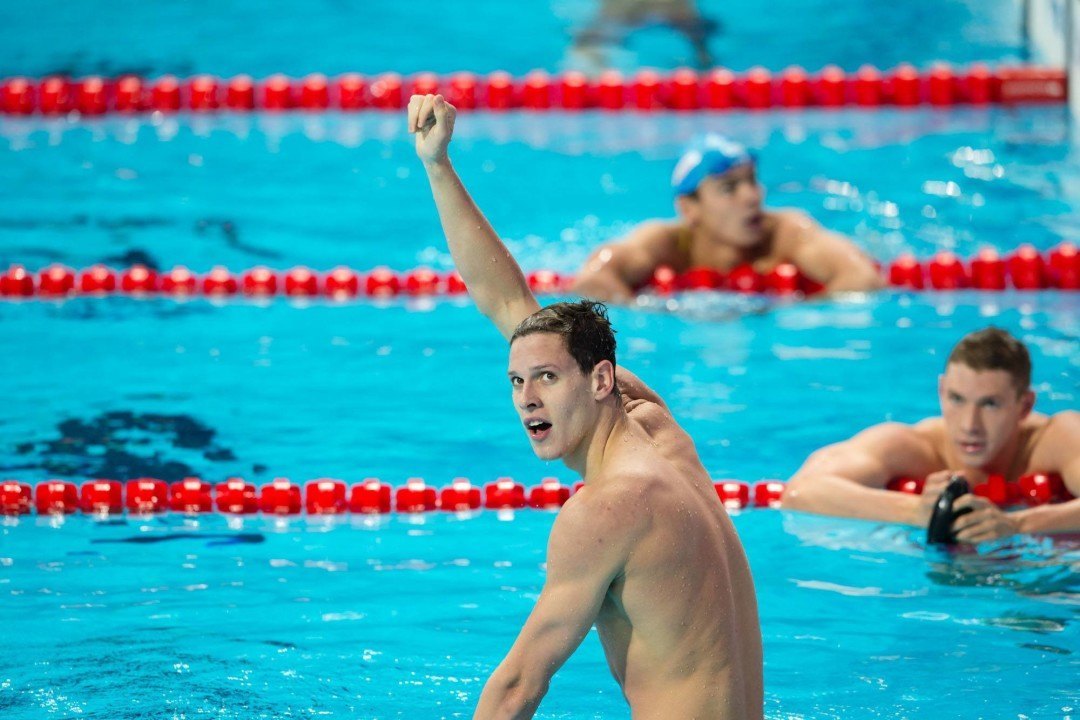 Mitch Larkin announced to the swimming world that he had truly arrived as a top contender for Olympic gold this... Current photo via Tim Binning/TheSwimPictures.com

Mitch Larkin announced to the swimming world that he had truly arrived as a top contender for Olympic gold this summer in Kazan winning both the 100 and 200 backstroke events at the World Championships.

But it was in 2010 that Larkin first made his mark on the international stage as a junior athlete winning the 400 IM in a meet record time of 4:16.07 at the Junior Pan Pacific Championships in Maui. At the same meet he also collected a silver in the 200 IM and a bronze in the 200 backstroke.

Through the past six years Larkin has trained with St. Peters Western under the leadership of Michael Bohl. Bohl feels that Larkin’s training base and success as an individual medley swimmer has been one of the biggest reasons for what he has accomplished over the past few years, “Mitch has been in the program for six to seven years,” Bohl told SwimSwam.

“As an age grouper he was a great individual medley swimmer and he had a great base of training. Since he joined SPW we have continued that with him.”

Larkin made his first senior national team in 2011 representing Australia at the World Championships placing 23rd in the 200 backstroke. He went on to compete in the same event at both the 2012 Olympics and the 2013 World Championships.

During that time his results at these high level competitions were extremely inconsistent. In London Larkin finished eighth, but put up a time in the final that was over a second slower than his semi-final result. The next year at the World Championships in Barcelona he missed out on the semi-final finishing 17th after the prelims.

“Both the Commonwealth Games and the Pan Pacs gave Mitch confidence,” said Bohl.

“His international performances prior to that were erratic. Stepping up at the Commonwealths was good for his self-belief, but backing up several weeks later at Pan Pacs in Australia racing Matt Grevers, Ryosuke Irie, Tyler Clary and Ryan Murphy and being competitive with them was a good confidence boost.”

Bohl feels one of the reasons Larkin has made the breakthroughs he has is due to his continued improvement on executing his race strategy, “Racing wise, he puts his race plan together nicely. He is still learning how to put his race plan together well under the pressures of the Olympics and World Championship level competitions.”

One of the advantages of swimming with a team such as St. Peters Western is swimmers have opportunity to train and learn from athletes who have experienced success at the highest level, something Larkin has taken advantage of, “His approach to training is superb,” says Bohl.

“Quiet and determined, but he really enjoys both training and competing. I believe he has learnt a lot from the likes of Stephanie Rice, Ryosuke Irie (after his three month stint with our team in 2013) and Park Tae Hwan. All successful, hard working swimmers that performed to podium level at the Olympic Games.”

Bohl feels that Larkin’s approach along with his outstanding work ethic and resilience are his greatest strengths.

“His work ethic, his willingness to strengthen his weaknesses and his ability to bounce back after disappointment are probably his greatest strengths.”

Heading into the 2014-15 Bohl and Larkin did not change their approach to his preparation, “We really do not tend to change too much. A little more focus on starts, turns and underwater kick in conjunction with a good balance of conditioning work and speed work.”

“I believe Kazan was an end result of seven years of positioning himself; chasing and striving to be competitive with the best backstrokers in the world.”

A key part to that preparation is the use of the support that Swimming Australia has provided the St. Peters Western program, “Skills are important. Swimming Australia and the Queensland Academy of Sport are assisting in the area of skill development,” explained Bohl.

“We film the swimmers on a relatively regular basis and these skills must also continue to develop. The Australian Institute of Sport has a very good biomechanics department that Mitch also has access to and at various times throughout the year time is spent in Canberra honing his skills in more detail.”

Another key in Larkin’s training is the way that they approach training for ‘the race’ and ensuring that the challenge in practice sessions are at a higher intensity than they are in competition, “We regularly refer to “the race” in training scenarios. We believe in making the training level on high quality days harder than the race.”

“The race strategy for the 100 and 200 are very different and very individual. His speed is developing nicely and the challenge is to keep that moving in a positive direction. Speed is an important part of both the 100 and 200 and putting the pieces of the puzzle together is always a challenge. Ensuring the speed is there and not losing focus of the endurance requirements of both events can be very tricky.”

Two of the sets that Bohl has Larkin perform on a semi-regular basis are as follows:

Larkin and Bohl face their biggest challenge this season, translating the results they have seen in the past two years to a podium finish at the Rio Olympics. Luckily Bohl has a great deal of experience when it comes to this scenario and doesn’t plan on changing his approach, “The Olympic year can be very consuming. Being able to remain calm yet being focussed is important.”

“I think you really do not need to change too much. Keep chipping away every day and keep trying to develop and get even better. Complacency is a results killer and really the focus is on getting better session by session, day by day, week by week and month by month.”

Jeff, fantastic article. Many insights into the progression of an athlete to world class level

Larkin was under the tutelage of Dean Pugh through his formative years through to around 17 years. A lot of Larkins development is down to him for sure! Dean also produced Keryn McMaster (400IM) and has a habit of producing gritty young medley swimmers!