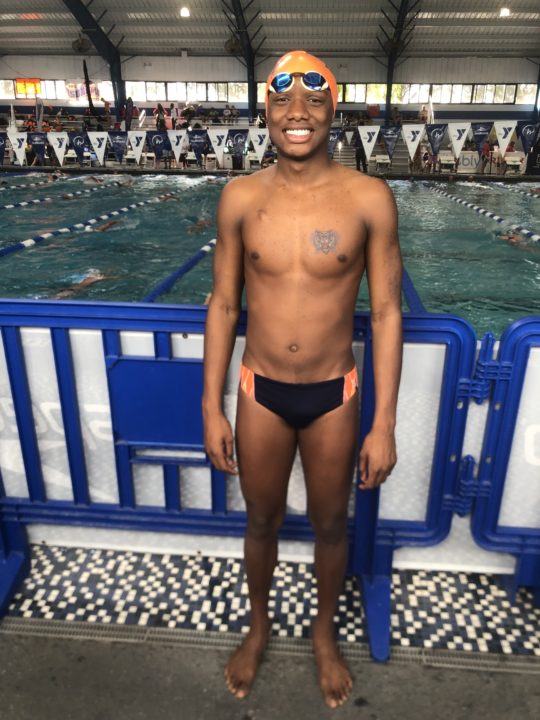 For the Covington family, the worst kind of news came the day after Christmas. Rian Covington, a 15-year old swimmer who is a Futures Qualifier with the Bolles School Sharks in Jacksonville, Florida, was diagnosed with Hodgkin’s lymphoma.

“It was a huge surprise when I got it because I was so healthy and super, super active,” Rian said. “You would never know.”

For about a year, Rian had a lump in the side of his neck that didn’t bother him at all as he remained in good health with no symptoms. He and his family believed it was just extra muscle tissue.

In the summer of 2018, Rian went to the doctor after catching a cold and his primary doctor later suggested that the Covingtons visit an ears, nose, and throat (ENT) doctor to get the lump looked at.

The ENT doctor did not believe the lump was cancerous, but recommended Rian get surgery to remove it. All the while, Rian kept swimming, and in fact, while he had the lump on the side of his neck, he did some of his best swimming.

But that was the last meet Covington swam in before undergoing surgery to remove the lump in the side of his neck later on in December.

After the lump was removed, the surgeons took a closer look at it and discovered the worst.

“And then the day after Christmas, that’s when we actually saw the oncologists and they confirmed that it was the Hodgkin’s lymphoma,” Raelyn Covington, Rian’s mom, said. “They thought it was the worst, the worst kind, the worst everything. It was kind of bad. Kind of hard.”

Shortly after the surgery to remove the lump, surgeons went back in to remove the remaining cancer cells. In January, Rian found out that the surgeons had successfully removed all cancer cells, but in order to keep the disease at bay, he needed to begin chemotherapy.

Before Rian began three rounds of chemotherapy, he had to undergo several tests and procedures that would make sure his body could undergo chemotherapy.

Watching this as a mother was a challenge for Raelyn.

“It’s been heart-wrenching,” Raelyn said. “But I’m in the health profession, so you have to take what you’re given and try to make the best of it. I guess you could say in one word for me. It’s hard because it’s your child, it’s your baby. It’s very touching. But you have to really be strong for him basically.”

Rian finished his third and final round of chemotherapy a few weeks ago.

“I try to take my mind off it as much as possible but again it’s two full eight hour days in the hospital and it’s not the greatest thing,” Rian said. “The food is crap, the drugs are making my mouth taste bad. It’s not fun.”

Through it all, Rian has continued to swim but in an abbreviated fashion. His head coach at Bolles, Mike Kuzma, lets him come to practice about two times a week so that he can continue to keep his form and technique and stay active, but without pushing too hard.

And for Rian, swimming has been an escape throughout Hodgkin’s lymphoma.

“When I go to the pool, it’s like a safe haven basically,” Rian said. “I just go there, I don’t care if it’s 30 minutes, 20 minutes, an hour. I just go there to escape because I love the water and I just love to swim. Practice, that’s my time. I use that to go and do what I need to do.”

Raelyn was skeptical of her Rian getting back in the water so soon while fighting off the cancer, but she was understanding and wanted him to find joy in something while going through such a difficult time in his life.

“When he first got in the pool, he told me, ‘Mom I felt like a kid in the candy store,” Raelyn said. “And I will never ever forget that statement. That’s how he said it. He knew it when he touched the water.”

Rian has had a strong support system that consists of his family, friends and coach. He spends a lot of time focusing on his faith and feels he has gained a new perspective on swimming as a result of the Hodgkin’s lymphoma.

Before he was diagnosed, Raelyn said her son struggled with anxiety before meets and has been treated for it. But the sudden and abrupt change in his life has forced him to look at his favorite sports during high pressure swim meets in a different way.

“My outlook has probably changed because I realized that swimming is not everything,” Covington said. “I used to think it was everything and it’s really not because it can be stopped at any moment basically. It makes me want to drive further.”

Moving forward, Rian has big goals of going to Junior Nationals, swimming at a division one college, inspire other swimmers based on all that he’s been through, and according to his mother, potentially write a book about his journey through Hodgkin’s lymphoma.

And having that fuel to the fire should only help him in his future endeavors.

“I had a little drive but I had nothing behind it,” Covington said. “Now this, the diagnosis and everything that I’ve been through, just pushes that even more to know if I can get through this, what is a 100 fly, what’s a 200 fly, what’s a 500 free, what’s a cut, compared to the stuff that I had to go through.”

David Garces, a swimmer at MAC who has known Rian since elementary school, has been there to help his best friend throughout everything he’s been through.

Whenever the two spend time together, whether it be in bible studies at Celebration Church in Jacksonville or fishing at a lake in Rian’s backyard, Garces has one goal.

“Just hang out with him and like pretend that he doesn’t have it,” Garces said. “Don’t treat him any differently. Still play video games or go outside or play basketball or we would go fishing.”

While Rian has finished chemotherapy, more still lies ahead for him medically. He will need another surgery at Wolfson’s Children’s Hospital in downtown Jacksonville to remove the port in his chest. The port was used to give his body chemotherapy.

Rian hopes he can return to a swim meet in April and has even targeted one meet in particular, the Jax 50, which is a 50 free swim-off meet.

As far as if he’ll ever reach the impressive time standards he set before he underwent chemotherapy and before he knew he had Hodgkin’s lymphoma, Rian isn’t concerned about that. He wants to do even better than his previous time standards.

And now he’s got the drive and mental focus to do just that among other qualities that define him according to his best friend.

“I think of raw talent, absolutely, and I think of a happy person,” Garces said. “Like I’ve never seen him once in my life cry. Never seen him. He’s always been so happy.”

A lot of doctors will tell you that it helps a lot making it through something like this if you have a positive mental attitude, and if swimming half an hour or so twice a week helps Rian keep that attitude, great. And he sounds quite resilient in the face of this; good for him.

I support you, and I know you’ll make it through this challenge. I’m a Hodgkin Lymphoma survivor for the last 19.5 years. Best wishes for a long and healthy life after this, and best wishes for a time when this will all seem like a faded memory.