The Magic of Swimming 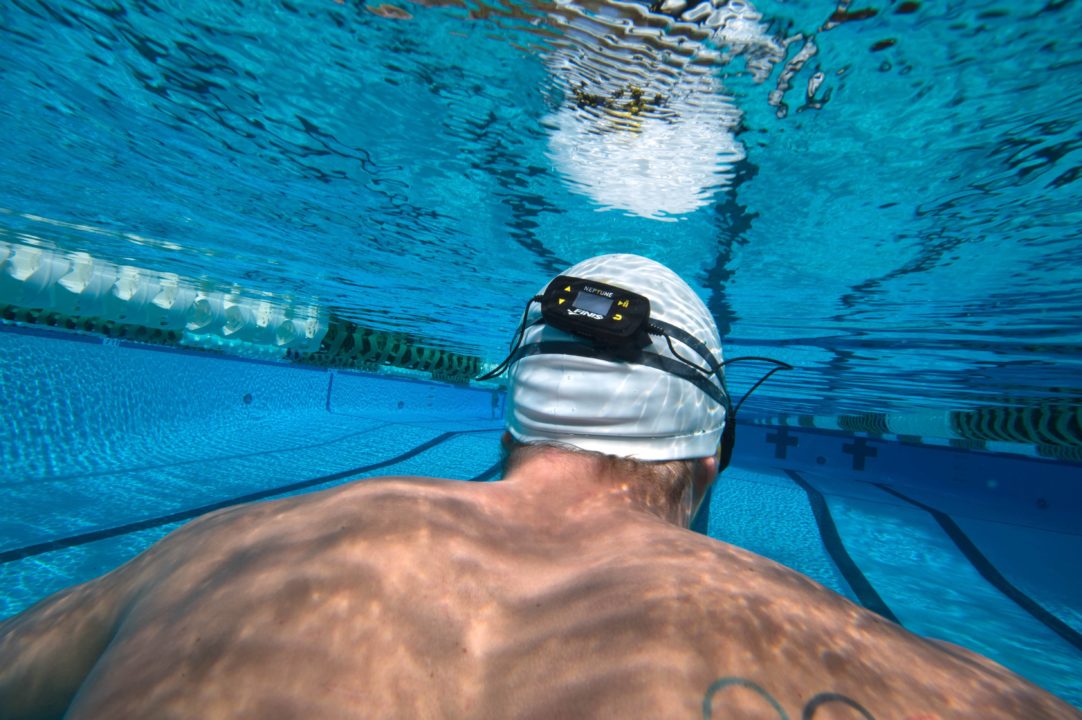 Tim Elson: "I’m here to tell you that anyone can experience the magic effects of swimming…" Current photo via Mike Lewis/Ola Vista Photography

It has shaped me as a person; I am who I am today because of two things: great parents and the hours spent in a swimming pool from the ages of 12 to 22. I swam on the world famous Santa Clara Swim Club. When I joined the team in 1968, Mark Spitz, who went on to win seven gold medals in the 1972 Olympics, was on our team. I grew up swimming with other Olympians and world record holders—my success was quite modest in comparison. However, I am proud to say that I swam in the Olympic trials and attended Pepperdine University on a water polo and swimming scholarship, where I was a starter on an NCAA Final Four water polo team. I later became the head swimming coach at Pepperdine University and held that position for 15 years. Today, I’m the vice president of the coolest swimming company around, FINIS, Inc. I met my wife at the pool at Pepperdine, and we have a seven-year-old boy and ten-year-old girl who both spend much of their time at the pool. My dream is for them to become swimmers and water polo players. But even if they don’t, they will learn the magic of swimming, and I hope they will swim for the rest of their lives. That is what I’d like to share with all who read this: swimming does something magical to the mind and body that every one of us should experience.

Didn’t feel too magical there either. Nearly 40 years later, I swim three to four days a week for an hour. Not too fast and not too slow. Not only is it one of the most pleasurable things I do during my week, but also the way it makes me feel when I’m done is part of the magic. I’ve never had a “runner’s high,” and I’m not going to have one anytime soon, my age precludes any future running—as does an arthritic knee. I have done a great deal of running, and what I remember most is that my feet hurt, my back hurt, and my head felt like it was going to explode from overheating. In fact, to me, the magic of swimming is that it is the opposite of running. After swimming, my feet actually feel brand new. My posture and gait after my swim are those of someone 20 years younger than I. My knees don’t hurt; my arm, chest, and lat muscles are pumped; and how can you get overheated in the water? Actually you can but not at this magical level!

My mental focus is at a zenith (better than a cup of coffee, although I’ll partake in that, too!). The residual energy is almost too much at times, but I pace myself throughout the morning, as that feeling will fade later in the day. My stomach is flat, and I weigh 165 pounds on my 6’1” frame, just a few pounds lighter than my collegiate playing weight was. That’s all well and good, but here is the real magic: I can feel like this ALL THE TIME, and I can do it until I’m 100 years old, which I fully intend to do. In a nutshell, swimming can make you feel unbelievably great. It’s good for your body and your mind, and I feel strongly that millions, perhaps tens of millions of people, are missing out.

I’m here to tell you that anyone can experience the magic effects of swimming, but I’m sure some of you are saying, “Tim, easy for you to say. You have a lifetime of swimming on your side.”

To that I say, “Whoa, whoa! Not so fast!” So much of the power of this process is entirely up to you. If you commit to making your swim genuinely enjoyable, the water will soon become your second home just as it has become mine.

I can certainly relate to a basic level of fear of the water—I spent a great deal of my early life equating incredible pain to being in the water. I’ve known many elite swimmers and Olympians who are now out of shape because as soon as they swam their last meet, they swore they would never swim a lap again, and they’ve stayed true to their word. Fortunately, I never reached the point of distaste for swimming because, early on, I developed a positive association between surfing and swimming. Swimming and paddling are very similar, and being an experienced sprint swimmer certainly helped when I was learning to surf—no one could out paddle me! That was the beginning of changing my perception of pain, pleasure, and being in the water.

So that’s the first step. You need to make swimming fun. If you make it fun, you will succeed, and it will be sustainable.

As a coach, I came to believe that communication and human behavior were critical aspects of motivation. In the case of college swimmers, motivation was challenging in the sense that the athletes did not equate (just as I did not at that age) being in the water with pleasure. My athletes were covering up to 20,000 yards or meters per day. A good portion of that yardage would be in the form of stressful effort on very little rest. Pure grit and the ability to push through mental barriers were just the beginning; we had to get friendly with Mr. Pain—and his friends—Mr. Agony and Mr. Torture. These three gentlemen have no place in the magic of swimming.

The question then is how do you make swimming fun and eliminate the threat of pain, agony, and torture?

I don’t have the almighty answer here, but I’ll share with you how I do it. First of all, I’m a morning person, but don’t panic – you don’t have to swim in the morning. Being a swimmer and coach all these years, I had countless 6 a.m. practices, so I was molded accordingly. However, whether you’re an early riser or not, mornings are tough mostly because you’re lurching yourself from a warm bed into a cold pool. True story: I’ve caught snowflakes on my tongue while swimming backstroke. Back in the 1970s, pool technology was such that keeping the temperature consistent was incredibly difficult. We had some days that the water’s temperature dipped below 70° Fahrenheit. This is horribly cold, especially if you weigh 92 pounds as I did when I was 13 years old.

Now, fast-forward 35 years, and I’ve learned to eliminate the factors that detract from an enjoyable swim.

Early hours and cold temperatures are not a problem because I now swim indoors and sit in a hot tub for 10 minutes before beginning my workout. Finally, pain, agony, and torture? Don’t need any of them. As I said earlier, I swim for an hour, not too fast and not too slow. And instead of pain, agony, and torture, I listen to my waterproof mp3 player, which plays about 90 of my favorite songs. I wake up early, and instead of thinking about how tired and cold I am, I can’t wait to get into the hot tub. Perhaps another article should be the magic of the hot tub! It’s certainly the greatest prelude to really waking up, and, at the point when I’m a little too hot, the refreshing lap pool awaits me. I am now ready to experience one of my favorite things to do knowing full well that I will be further rewarded with the magic when it’s all done. I can only wish you the same joy and satisfaction that comes from being in the water. Happy swimming!

I swam competitively from age 9.5 until i was over 20. I also played water polo in college. I find this article is so true about the “magic of swimming”. I had many a down moment in my life that I found myself back in the pool getting over the hump of going on by digging out more laps in the pool. I highly recommend the hot dry sauna, prior to swimming some 200 yds warm up then 1 lap at max speed, of a High Intensity Training of doing those 50 yard sprints to bring your heart rate up to peak, then a 50 yard backstroke cool down followed by at least 2 minutes of catching your breath and… Read more »

PS. forgot to mention I do the sprints 3 or 4 times then swim another 150 to 200 yards cool down to finish. also my time in the sauna is spent doing a high hands above head walking in place until my pores are well cleaned then shower off before the pool workout.