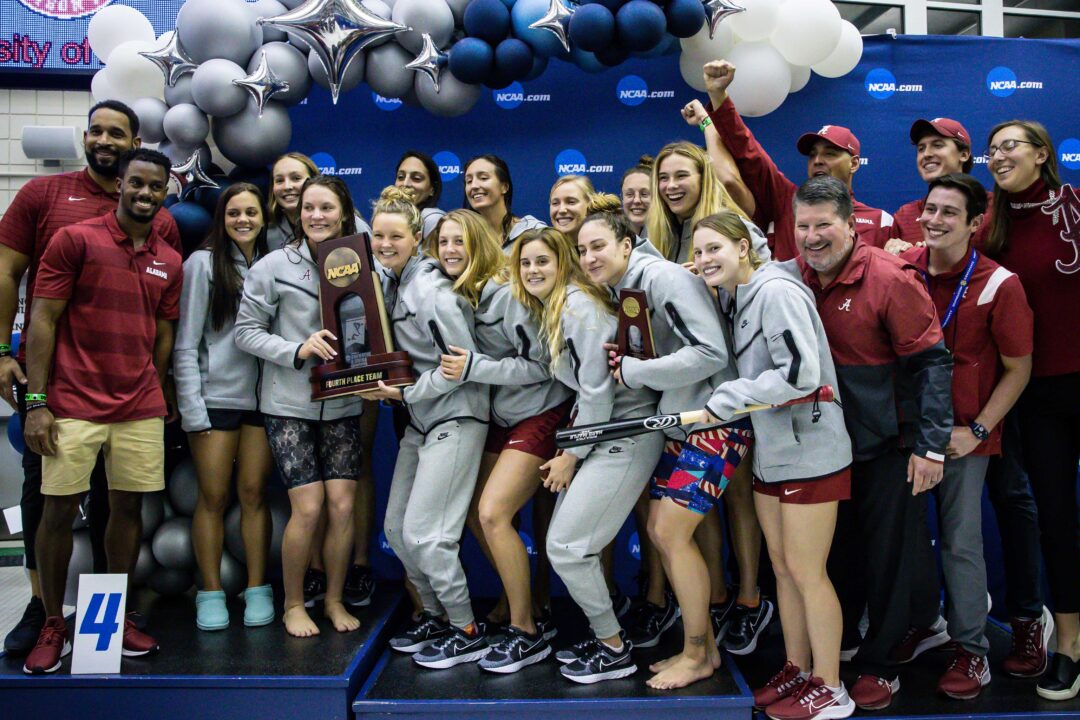 The Alabama women return every single points scorer and relay member from the 2022 NCAA Championships for this upcoming season. Archive photo via Jack Spitser/Spitser Photography

The Alabama women’s team will be returning all 288 points that they scored at the 2022 NCAA Championships to finish fourth for this upcoming season.

Nine out of Alabama’s 10 swimmers from 2022 NCAAs will be returning for the upcoming 2022-2023 season as they only lose Morgan Liberto who has since graduated.

Seniors Rhyan White, Morgan Scott, Kensey McMahon, Kalia Antoniou, and Cat Wright will be returning to use their COVID-19 fifth year of eligibility. The group combined to score 107 individual points at NCAAs.

The Alabama women also scored in all five NCAA relays, finishing in the top eight in all but the 800 free relay. Notably, all 20 of their relay legs will be returning as well. The five seniors returning combined to make up 11 of the 20 relay legs. At least two seniors were on every single relay last year, but the team will not have to be in search of any replacements for this upcoming season.

The Alabama women’s fourth place finish was their highest finish in program history. They were led by first year head coach Margo Geer who will now be entering her second full season this fall.

The most recent SwimSwam rankings for the class of 2022 (incoming freshman) came out in May 2021. Based on those rankings, Alabama will have both-of-the-rest distance freestyler Laci Black arrive on campus. Black and the rest of the class of 2026 can be seen below recently on campus already.

From what SwimSwam can think of, this is the first time that at least a top 4 team from NCAAs will be returning all of their NCAA points as well as all of their relay legs. The main way this is able to happen is because of the COVID-19 waiver the NCAA put in place during the 2020-2021 season allowing swimmers to take a fifth year.

Many athletes took this extra year this past season, but that number was expected to fall over the next few years mainly due to one reason: scholarships. The biggest difference between this past season’s fifth years and future seasons is the scholarship cap. Women’s swimming is allowed 14 total scholarships per team. This past season, 5th year seniors didn’t count toward that cap unless they transferred. In future seasons, 5th year seniors will count against the cap, until the waiver expires. This means that every swimmer regardless if they transfer or not, will have their scholarship count into the program’s cap.

Based on the SwimSwam tracker so far, 46 men and 46 women will be taking fifth years for this upcoming season. That number is already higher than the tracker we had for this past season as this past season we had 45 women and 35 men.

What an absolute stud @margo

beyond impressed with what she’s been able to do here

At a minimum, it certainly says something very positive about the experience these athletes had under Margo to all want another year.

Yet she hasn’t recruited well or coached any of the aforementioned women.

7
-2
Reply
Swimmin in the South