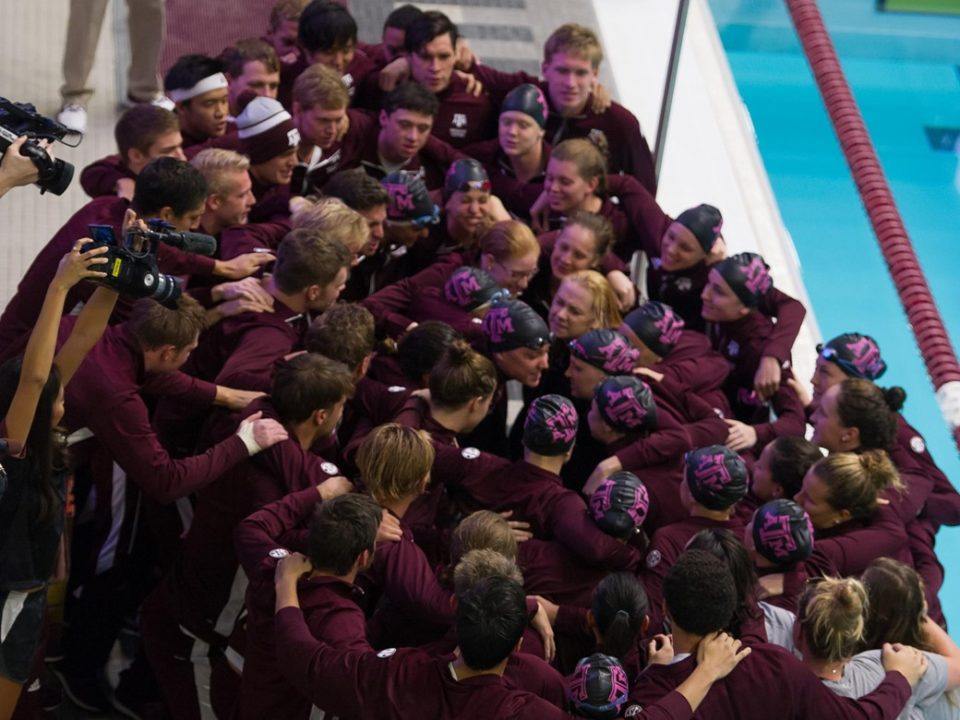 The Aggies won all of the individual freestyle races on the women's side, with freshman standout Haley Yelle impressing in the distance events. Current photo via Texas A&M Athletics

The Texas A&M men and women made the trip to Alabama this weekend for a dual meet against SEC rival Auburn on Saturday. The teams split the meet, with the A&M women taking down Auburn on the women’s side. The men’s meet, which saw former Bolles coaches Sergio Lopez (Auburn Associate Head Coach) and Jason Calanog (Texas A&M Assistant Coach) pitted against each other, went to the Auburn Tigers.

On the women’s side, Aly Tetzloff pulled off a winning triple for the Tigers. In the 100 back, she took on Texas A&M All-American Lisa Bratton, using her front half speed to take the win in 53.37 to Bratton’s 53.71. Tetzloff was neck-and-neck with Texas A&M freshman Jing Quah (53.53) through the halfway point of the 100 fly, but was able to pull ahead on the back half to win in 53.16. She battled with the Aggies’ All-American IMer Bethany Galat in the 200 IM to close the session. Tetzloff held a 2 seconds lead over Galat through the backstroke leg, but Galat outsplit her with a 34.13 to close the gap on breaststroke. Tetzloff hammered home in 28.13, building her lead again to win with a 2:00.43 to Galat’s 2:01.21.

The Aggies won all of the individual freestyle races on the women’s side. All-American Beryl Gastaldello swept the sprints, first winning the 50 free in 22.51. She then handed Auburn’s Julie Meynen the first dual meet loss of her career in the 100 free. Until today, Meynen had stayed perfect in that event in dual meets, but Gastaldello out-touched her 49.15 to 49.24. Fellow All-American Claire Rasmus won her signature 200 free for the Aggies, touching in 1:47.96.

AUBURN, Ala. — The Texas A&M women’s swimming and diving team tallied a 171-122 win over No. 15 Auburn on Saturday at the Martin Aquatics Center on the Auburn University campus.

The Aggies improved to 3-0 in dual meet action in 2017-18 while winning 11 of 16 possible events against the Tigers, including taking at least the top two spots in five races.

“We started well with a really solid medley relay time for this time of year, and then we got on a roll,” Aggie women’s head coach Steve Bultman said. “We had three double winners and took the two spots in a bunch of races, so I was very happy with the way we competed. We came here wanting to see improvement and we definitely did a bunch of areas. Ultimately, we wanted to race against some really good competition and get a victory, which we were able to do.”

The Aggies opened and closed the meet with relay victories. The Aggie foursome of Bratton, Caneta, Quah and Gastaldello won the 200 medley relay in 1:38.88, while the group of Gastaldello, Rasmus, sophomore Golf Sapianchai and sophomore Katie Portz touched first in the 400 free relay in 3:19.25.

“It was another day of solid racing for us,” Auburn head coach Brett Hawke said. “We are deep into our training cycle and we have been training hard for the past seven weeks now. Overall I’m very pleased with our progression.”

Auburn’s distance trio of Bryan Lee, Grant Shenk and Russell Noletto had a solid afternoon of swims, finishing 1-3-4 in both the 1000 and 500 freestyles.

“Hats off to the distance swimmers, I felt like they won the meet for us today,” Hawke said. “The 1000 and 500 frees were big momentum swings.”

Hugo Gonzalez rounded out the individual wins on the men’s side with a 1:47.66.

On the women’s side, Auburn earned six wins, with Aly Tetzloff picking up three of them.

“Aly Tetzloff was sensational today, winning three events against one of the best teams in the country,” Hawke said.

In the diving well, sophomore Alison Maillard swept the springboard events, winning the 1-meter with a season-best score of 289.88 and the 3-meter with a 313.43.

Auburn remains at home next week, facing Alabama at 1 p.m. on Friday at the Martin Aquatics Center. The meet will be the final home dual meet for Auburn’s senior class.

Both men and women looking great thus far! Hopefully this NCAA’s will be much better!