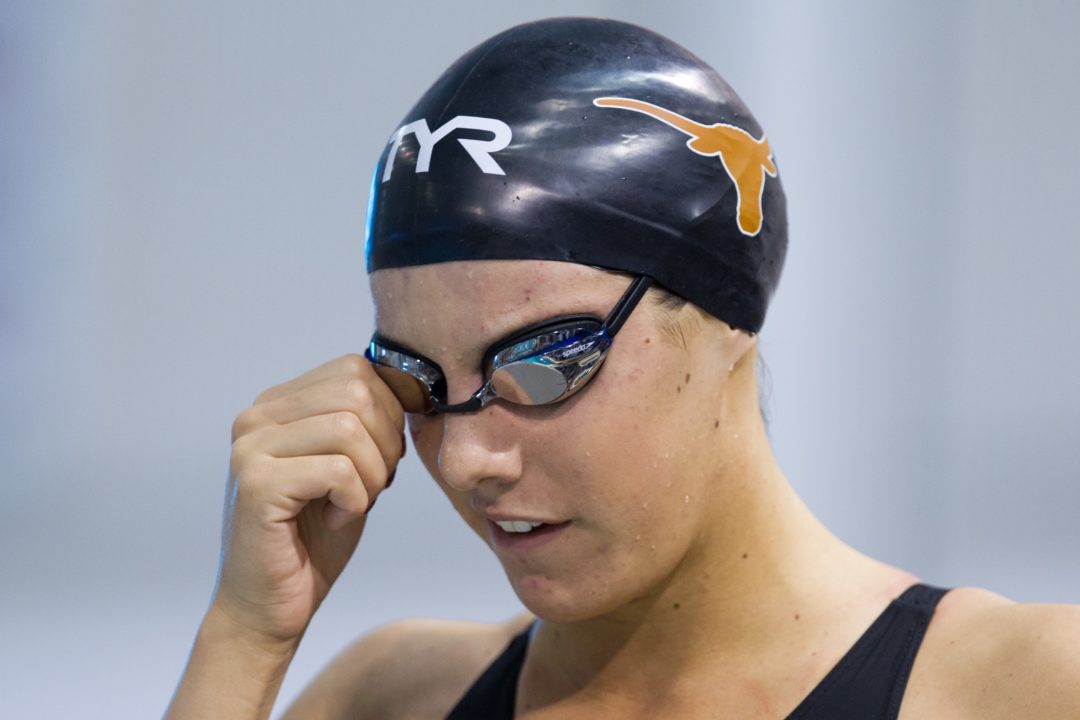 Catherine Wagner will be on deck at the Texas Swim Center all week, covering the 2013 Big 12 Championships.

As expected, the University of Texas men and women swept all four relays on night 1 of the Big 12 Championships. Although this meet does not have quite the level of competition as the SEC and Pac 12, there were still many great performances, and many more will be sure to come as the meet progresses on. The competition surely has a different dynamic this year due to Texas A&M and Missouri’s departure to the SEC, but it is obvious that it isn’t going to stop the remaining Big 12 teams from swimming fast.

The Texas women started the meet off in the best way they could have hoped. The Longhorns were in control from the very beginning with the help of a 24.41 leadoff from junior Arizona transfer Sarah Denninghoff. Teaming up with Laura Sogar, Kelsey Amundsen, and Ellen Lobb, the four were able to set a new school record in an NCAA Automatic qualifying time of 1:36.69. Sogar had an incredible 26.90 breaststroke split (which is about what Caitlin Leverenz went out at Pac 12’s). She’s definitely made huge strides this season in regards to speed, and will be instrumental in Texas’ success at NCAA’s. In addition, Texas’ B relay also achieved this ‘A’ cut, and actually put up a time that was faster than what the Lady Longhorns went all of last season.

It is clear that Texas is already reaping the benefits of first-year head coach Carol Capitani, and hopefully the success of these relays will provide momentum for the remainder of the meet. Although Texas has entered the meet as heavy favorites, they have proved that they mean business, and are likely looking at results from SECs and Pac 12s as a huge source of motivation.

West Virginia won the battle for second in a time of 1:39.50, followed by Iowa State’s 1:40.84. Sophomore Amanda Paulson from ISU had an excellent 22.25 freestyle anchor, and is certainly a swimmer to watch for in the sprint races this weekend. A common trend we have seen at these conference meets are the first night relay DQs, and the Big 12 was no exception. The University of Kansas suffered an early blow with a disqualification in this relay, but they will have plenty of time to recover and can hopefully make up the 30-or-so points they lost.

Like the women, the Texas men cruised to victory and earned Texas another Big 12 title. The team of Cole Cragin, Dax Hill, Tripp Cooper, and Madison Wenzler dropped over 2 seconds from their seed time with a 1:25.23 performance, good for 5th in the country and what would have been a third place finish at SECs. West Virginia touched the wall second with a 1:28.71, receiving all they could handle from TCU who was third in 1:29.03. This race for second was a barn-burner until the freestyle leg, where freshman Ross Glegg came through for the Mountaineers with a 19.54 anchor.

Texas has been searching for a breaststroker all season, and Dax Hill certainly showed he is a viable option with his 23.80 split. Hill actually swam breaststroke in high school, so using his talents on this medley relay could serve as a very good solution to this not uncommon “breaststroke conundrum” that Stanford and Texas A&M have been experiencing this year as well.

Led by a 1:44.74 lead-off from Samantha Tucker, the team of Tucker, Denninghoff, Kelsey LeNeave, and Alex Hooper put up a 7:01.61 en route to another Texas victory. This time would have placed them 5th at SEC’s, behind Georgia, Tennessee, Florida, and rival Texas A&M. However, because of the lack of high-level competition in the Big 12 this year, it can be assumed that Texas will have much more to bring to the table by the time NCAA’s comes around. West Virginia once again touched the wall in second with a time of 7:12.98, led by senior Rachael Burnett’s 1:45.77 lead-off. TCU was third in 7:15.12, with a very good 1:46.76 from Katie Scarsella. Burnett and Scarsella are two swimmers who have an excellent chance to be extremely competitive at this meet, and certainly have the ability to throw a wrench in potential Texas podium sweeps of the freestyle events.

Eddie Reese and the Texas men are known for their 200 freestyles, and, subsequently, their 800 free relay. As the reigning NCAA Champions in this event, the Longhorns certainly did not disappoint as Dax Hill, Jake Ritter, Kip Darmody, and Clay Youngquist cruised to a 16 second victory and an NCAA ‘A’ cut with a 6:17.33, good for the third fastest time in the country (it was the second, but Michigan was 6:13 tonight at B1G’s). Hill led off with a 1:33.79 (his fastest time of the year), followed by an impressive 1:34.32 from distance swimmer Ritter. Darmody split 1:35.75, and Youngquist had the fastest time in the field of 1:33.47. In second was West Virginia (6:33.44) who once again greatly benefited from freshman Ross Glegg, as he put up a 1:36.46 lead-off. TCU finished third in 6:37.59.

Also of note was the Texas B relay, in which freshman Sam Lewis put up the 17th fastest time in the nation and all but booked his ticket to NCAA’s with an excellent 1:34.98 lead-off leg. Not only does this put Lewis in a position to be top-16 at NCAA’s, but it also gives him a great chance at a relay spot in Indianapolis.

The Texas Longhorns made it 5-for-5 in Big 12 titles for the evening with freshman Cory Bowersox’s victory on the 1 meter springboard event. His final score was 360.55. He was followed by junior teammate Will McCraney (336.00) and West Virginia’s Richard Pokorney (317.00) in third. The Mountaineers took the 3rd, 4th, 5th, and 8th positions, earning them valuable points in their team race against TCU.

West Virginia has a lead on the men’s meet after one day. That’s a great position to be in for them, and will excite their fan base, but it’s unlikely to last, as the Mountaineers five 1-meter divers easily outscored Texas’ two.

Miss Sogar is definitely at another level since last year. Great USA short course championships 3 months ago with impressive new PB, great short course world championships in December with a silver medal in the 200 breast. She’s now among the top American breaststrokers. She will give much work to Breeja Larson next month at the NCAA championships.