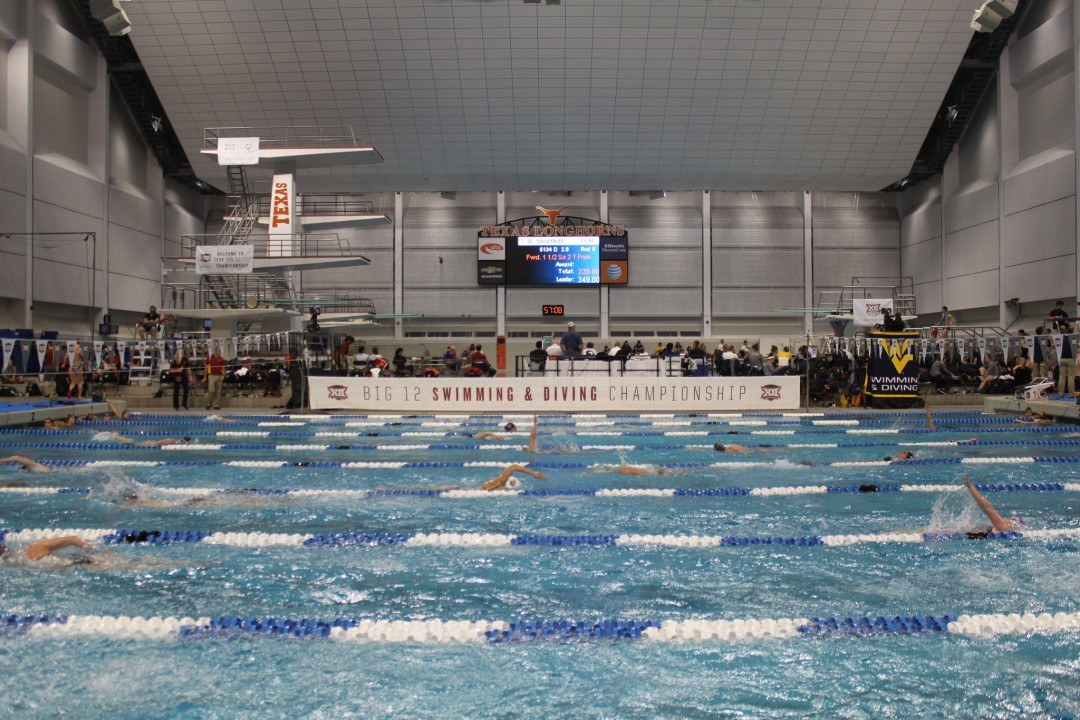 To no surprise, the Texas Longhorns will again be the host for the Big 12 Swimming & Diving Championships. The... Current photo via Photo Courtesy of Andy Ringgold

To no surprise, the Texas Longhorns will again be the host for the Big 12 Swimming & Diving Championships. The 2019 meet will run from Wednesday, February 27 to Saturday, March 2 at the Lee & Joe Jamail Texas Swim Center in Austin, Texas.

This will be the 6th straight year the Longhorns compete at the Big 12 Championships in their home pool. However, the scenery is set to change in 2020 when West Virginia‘s new aquatics center opens. The roughly 90,000 square-foot aquatic center will feature a 50-meter, 8-lane pool, separate diving well with 1-3m springboards and 1-3-5-7-10m platforms, and seating for more than 1,200 spectators. Construction of the facility is scheduled to be completed in the spring of 2019.

Already a small conference swimming-wise, the Big 12 was decimated by conference realignment in 2012 when Texas A&M and Missouri made the jump to the SEC. Thus, the result has been a continued streak of dominance for the Texas men (39 consecutive conference championships, to be exact) and smoother waters for the Longhorn women without the powerhouse Aggies to contend with. On top of that, realignment left the conference without two of the premier facilities in the country in College Station, TX and Columbia, MO. Since joining the SEC, both Texas A&M and Missouri have hosted the SEC Championships.