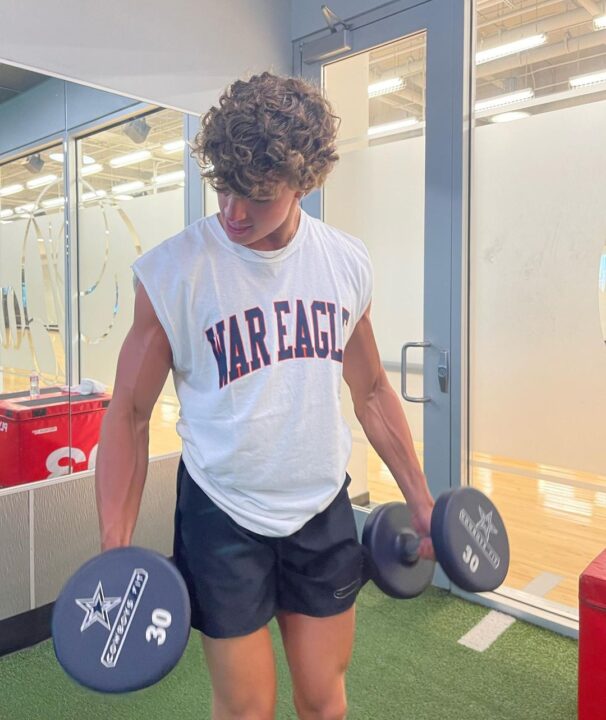 Jon VanZandt's commitment photo announcement to Auburn swimming & diving as a member of their class of 2026 was a big flex. Literally.

Rising high school senior Jon VanZandt from Frisco, Texas has verbally committed to Auburn University as part of their incoming class for fall 2022.

“I’m blessed to announce my verbal commitment to Auburn University. This opportunity wouldn’t be possible without my teammates, coaches, and my family. War Eagle!”

As a junior at Frisco High School in north Dallas, VanZandt was the Texas Class 5A (smaller schools of two classes, though still large by the standards of most states) runner-up in the 50 free and 3rd-place finisher in the 100 free.

That junior season was the culmination of a significant run of drops for him. He swam best times in the 50 free, for example, in December at a club meet, again in January at a District meet, and again in early February at a Regional meet. In total, he improved from 21.37 at his sophomore state meet to 20.48 in the 50 free; and in the 100 from 46.68 to 45.14.

VanZandt is a relative latecomer to year-round club swimming, registering his first results with Texas Ford Aquatics at 14 (a hiatus after a few swims when he was 7 and 8 years old). He’s developed quickly in the sprint freestyles, though he still doesn’t have much of an SEC-level third event.

But what Auburn needs as part of their rebuilding process under new head coach Ryan Wochomurka is sprinters, and Wochomurka knows that – he was on the team at Auburn in the 2000s, when they amassed one of the best sprint groups in NCAA history and rode it to a pile of national championships.

The Auburn 200 free relay, for example, was just 8th at SECs last season, which is a historic low for a program that has such a powerful sprint reputation.

If VanZandt continues to develop with year-round swimming, he could be an immediate impact on Auburn relays as a freshman (though his relay splits to date haven’t been as good as his flat-start times).

While Auburn is well into their class of 2023 recruiting, VanZandt helps wrap up a class of 2022 that is heavily focused on the sprints. That includes the Southeastern LSC Championships in the 100 meter free from over the summer Drew Jordan, and the Kentucky High School 3rd-place finisher in the 50 free Lucas Thomas. Adding some versatility to that group is versatile 200 yard+ guy Collin Klingman, middle-distance freestyler Josh Cobia, and butterflier Tate Cutler.

The group is deep, though it lacks a superstar, but for Auburn, starting to rebuild the depth, and developing athletes like VanZandt into NCAA qualifiers and scorers, is as important as recruiting superstars for the long-term health of the program.

Can someone explain this one to me? Is it just because of the fact he’s lifting in the picture?

It’s because this will likely be one of the worst-aging commitment submission pictures you’ll see from the cringe factor. Once you start lifting and see some gains after the first year or so (especially when you are a teen), you let it get to your head, and end up thinking it’s a good idea to stage important milestones of your life (such as making your college commitment) in a “gym bro” theme. Imagine having your senior or prom photos being taken at some CrossFit gym. We get it, you work out.

I figured the photo was mostly just meant as a joke. If people had some not-so-great personal encounters with the guy that I didn’t know about, then I’d get the criticism a bit more. Right now, it just seems like some 17 year old kid harmlessly messing around in my eyes.

Anybody tryna make any more or less of it than that is probably a Millennial or a Boomer. Issa nothing but a thirst trap.

Love a comment section where people mock commenters for being old while they mock someone for being themselves.

Not really, like from the little we see from his legs they look literally proportionally more developed than his upper arms

All this to get bottom two at SECs!

Hope he isn’t like the cowboys and crumble when it counts. I kid I kid. best of luck to him.