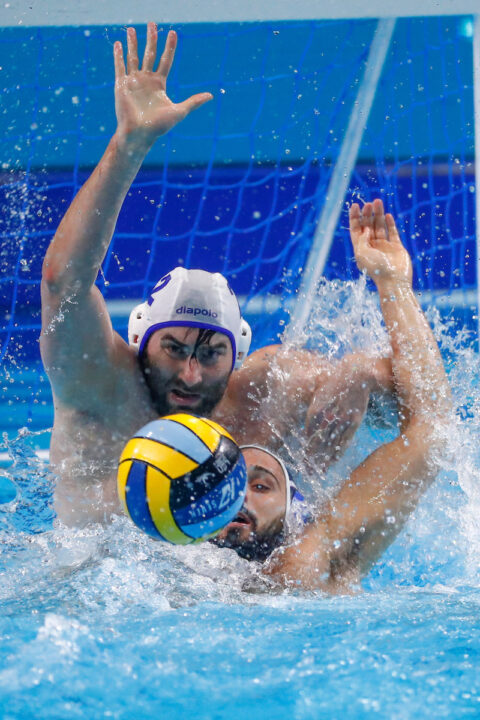 In the rematch of last season’s semi-final, Brescia and Ferencvaros produced another thriller ending in an 8-8 draw. Current photo via © A. Kovacs/Deepbluemedia/Insidefoto

In the rematch of last season’s semi-final, Brescia and Ferencvaros produced another thriller ending in an 8-8 draw. The other three matches turned into lop-sided contests: Novi Beograd won the Serbian derby over Radnicki with ease, a brilliant second period put Barceloneta in a winning position against Jadran Split, while Olympiacos pulled off an easy win over Dinamo Tbilisi. In this latter match Ioannis Fountoulis netted 8 goals.

Despite going through significant changes in their respective line-ups, Brescia and Ferencvaros offered the same thrills they had also produced in June in the semis of the F8. Back then the Hungarians won, now it ended in a draw – Brescia never led in the entire game but the Italians also had some chances once they came back from 4-6 down in 40 seconds. Though it was last season’s runner-up Ferencvaros who had two golden opportunities to gain a crucial away win but missed them both.

The other matches offered less excitements. Both in Barcelona and in Belgrade a 4-0 rush in a given quarter decided the outcome. Barceloneta had that flow in the second when they jumped to a 7-2 lead by halftime and even though Jadran had a better spell early in the third, the Spaniards sailed away with a fine win. In the Serbian derby underdog Radnicki kept up till halftime but Novi Beograd’s third period whirlwind blew them away as the new star team went 12-7 up after 8-7, and never looked back.

2018 champion Olympiacos had no headaches against the group’s weakest side Dinamo, the Greeks stopped at 20 – and only harder clashes await them in the next 12 rounds.

The two sides continued where they dropped the storyline last June: back then Ferencvaros won a real thriller in the semi-final in the F8, 14-12. Line-ups have changed at both clubs but the thrills remained for this opening encounter.

Despite missing a handful of man-ups, Ferencvaros took a better start and led 1-2 after eight minutes. Brescia equalised from a nicely played 6 on 5 but then came Denes Varga whose unusual – still brilliant  – finish from the 2m line in a man-up was followed by a more usual outside shot for 2-4. At this stage, the Italians struggled in offenc, still, after a silence of 5:25 minutes, a great centre-shot from Dorde Lazic 26 seconds before the middle break brought back some hope.

But Nemanja Ubovic, now playing for the Magyars, kicked off the second half with a similarly great goal from the centre for 3-5 so the encounter was turning into a chasing game. The hosts had a better spell after 4-6, netted two in 39 seconds while shutting out last season’s runner-up for three minutes, but the other new ace in Ferencvaros’ pack Russian Daniil Merkulov came up with a breathtaking outside shot for 6-7.

At the beginning of the fourth, Vincenzo Renzuto missed a penalty badly but soon Boris Vapenski found the back of the net for 7-7. It was Merkulov again how produced another stunner from the perimeter for 7-8 with 3:39 remaining. The visitors got a golden chance but Denes Varga sent the ball wide in a man-up, just 5 seconds after the time-out and from the counter Vincenzo Dolce scored the equalizer. It was still 2:31 on the clock so it was anybody’s game, but the defences worked well. With 16 seconds from time, Ferencvaros earned another shot at the win but, playing in a 6 on 5, Vamos hit the post in the dying seconds. This left the Magyars 2 for 11 in extras, Brescia was 4 for 14 – so it seems the draw was a rightful ending of this battle.

The Greeks didn’t leave any chance for the Georgian team in the season-opener. A 4-0 rush in 4:05 minutes set the tone, so the favourite side managed to avoid any struggles or headaches. By halftime the hosts were 9-4 up and kept on producing in front. The last period they hit 7 against the tiring rivals and finished the encounter with 20 goals. Returning shot-master Ioannis Fountoulis – played three years in Ferencvaros – enjoyed an extraordinary game as he netted 8.

For a period, the Croats could keep up with the hosts but in the second Barceloneta remained effective in front while Jadran lost its composure in offense. They conceded two early in the second, earned a man-up immediately in their following possessions but missed both and the Spaniards started sailing away. Marc Larumbe was on fire, netted three in this period – his third 13 seconds from time, another blast from action, gave his team a comforting 7-2 lead.

The Croats showed some strength in the third, pulled two back in two minutes and had a 6 on 5 to come even closer but they missed it after a time-out and that cost them dearly. Barceloneta buried its next man-up right away so it stood 8-4 instead of 7-5 and there was no way back for Jadran. From there, it was cruising time again, with Larumbe (4) and Alvaro Granados (3) outscoring their rivals jointly by the end – ensuring their Croatian head-coach Elvis Fatovic a great Champion League debut, eventually against a Croatian team.

Radnicki was off for a brave start and gained a two-goal lead early on, but the home side managed to come back to 3-3 still inside the first period. It was an even game in the second, despite two fast goals in 40 seconds by Novi Beograd after 5-5. Radnicki could find the answers for that and trailed only 8-7 at halftime. Radnicki’s problems started in the third – they ran out of gas in front while the newly shaped home side’s stars really settled, their shots sharpened and they were much more organized at both ends of the pool. It became visible on the scoreboard immediately, a 4-0 blow decided the outcome by the end of the third. Radnicki could score again after 10:22 minutes – it was too late as the game had gone by then. Nikola Jaksic was the hero of the evening as he finished with 5/5 in offense.

Visit our new dedicated Champions League website for watching each goal again and find all stats and more at http://championsleague.len.eu