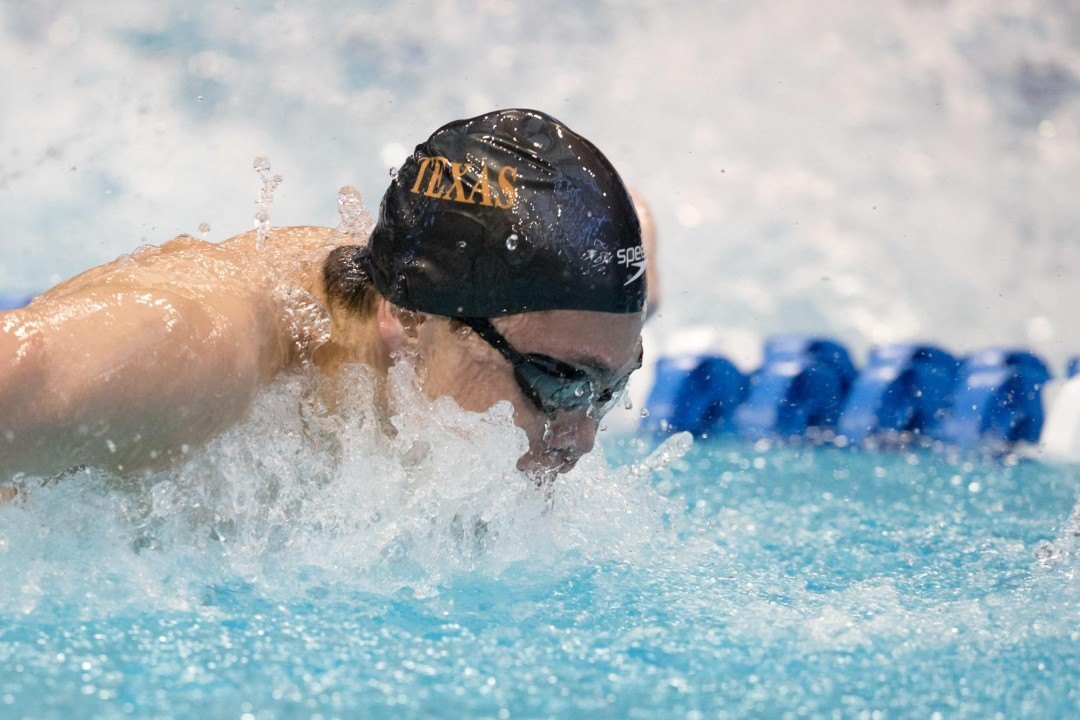 While illness has slowed the Longhorns' momentum early in 2016, the team remains the favorite for NCAA's thanks to Joseph Schooling (above), among others. Archive photo via Tim Binning/TheSwimPictures.com

Eddie Reese’s Texas men remain the #1 team in the country in the latest CSCAA poll, with Cal at #2. Texas was put in the top spot in all 9 ballots, and Cal was similarly 2nd in all 9 ballots for the second-straight poll.

The first movement came in a flip-flopping of Georgia and Florida in the #3 and #4 spots. Florida jumped a spot after beating in-state rivals Florida State, while Georgia slid after splitting in a Texas road trip against the unranked Aggies (win) and the #1 Longhorns (loss).

The biggest movement came in the bottom end of the poll, where previously-unranked Virginia Teach (#18) and Minnesota jumped into the top 20.

With 5 new teams entering the top 25 rankings, 5 teams also moved out: Florida State, Duke, and Denver all received votes but not enough to be ranked, while Ivies Penn and Princeton were unable to garner a point on any ballots after being ranked #24 and #25, respectively, in the last poll. That leaves no Ivy League teams in the rankings. Since that last poll, Penn swept Yale and Dartmouth, while Princeton has not competed in the new semester.

This leaves no Ivy League teams in the top 25.

SwimSwam is not a voting member of the CSCAA poll. The full press release is below.

Following a pair of impressive wins against top ten teams, the University of Texas showed why it remains atop College Swimming Coaches Association of America / TYR Top 25 Swimming & Diving Poll.  Over the course of the season the Longhorns have been ranked number one on every single ballot except one.

The University of California remained in second while Florida and Georgia flip-flopped with the Gators moving up to third and the Bulldogs falling to fourth.

The CSCAA Poll Committee produces in-season rankings of the 25 best performing NCAA Swimming and Diving teams in rank order at the time of each poll.  The poll is not designed to predict the results of the NCAA Championship, but rather which teams would win head-to-head against other teams in the country. Ranking are based on performances that have taken place since the previous poll and include invites as well as dual meets.