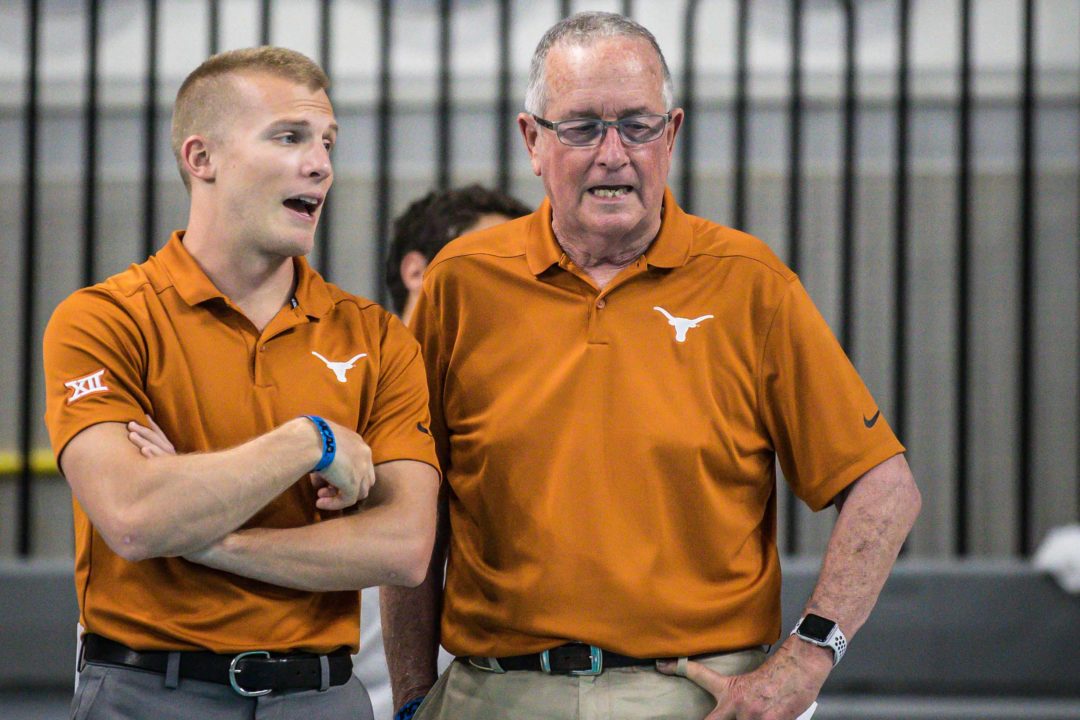 The Texas Longhorns remain at the #1 spot for both women and men in the latest CSCAA dual meet polls. The Texas men have led every poll this season. Archive photo via Jack Spitser/Spitser Photography

The Texas Longhorns remain at the #1 spot for both women and men in the latest CSCAA dual meet polls.

The Texas men have led every poll this season, marking eight straight appearances at #1. The last time the Longhorn men weren’t ranked #1 was in October of 2019, when they sat second to California.

In a year without many marquee dual meets and invites, the rankings have stayed remarkably stable since last month. In the men’s top 5, the only change from the last round of polls is that a second-place tie between Georgia and Cal has been broken, with Georgia now sitting #2 overall by just two points. On the women’s side, Tennessee rose from 5th to 4th, while Michigan jumped into the top 5 this time around.

The biggest changes came in the Big Ten, which has resumed competition after a fall with almost no intercollegiate meets. The top Big Ten programs have rapidly risen up the ranks on both sides, while the Pac-12 appears still a bit muted in the ranks without much competition to speak of.

Tarheels on the come up. Trust in Gangloff.

I trust in a lot of things but Gangloff isn’t one of them.

The Indiana Hoosiers are continuing to rise! Come NCAAs, Coach Looze will have the Hoosiers at number 1! Lets go IU!

You know it Ray doesn’t coach for the regular season he coaches for the big time, the prime time you best believe he’ll have these men and women ready when the time comes

Couldn’t have said it better myself! Never underestimate Ray Looze and his ability to lead IU to the promise land!

Anyone remember the Wolfpack troll account from a few years ago, I’m getting big vibes from this guy

Common theme – neither program will win an NCAA title for the foreseeable future.