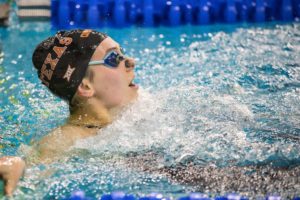 Austin, TX –  University of Texas superstar sophomore, Jack Conger, talked with his school’s Longhorn Network recently in a state-of-the-union-type conversation on a variety of subjects.  The five-time all-American discusses the Texas men’s team’s recent wins over Auburn and Georgia, reveals his revised training plan from last year, as well as describes what it was like when he met Aaron Peirsol in 2010.

The uber-challenging dual with Georgia last week resulted in a Texas win by just 12 points, and was immediately contested after an earlier battle against the Auburn Tigers, a meet which the Texas men also won.  In terms of what the two wins signify about the team, Conger indicates “they are a stepping stone for the entire season.”  He elaborates that the team was in the midst of hard training, the team knew they would be “broken down and tired”, but were determined to step it up, as they knew Auburn would be a tenacious adversary.

Conger, who won the 100 backstroke against Auburn, as well as swept both the 100 and 200 backstroke events against a tough Georgia field, was asked how this stroke discipline has improved for him this year.  Conger indicated he has been “following Eddie’s [Reese] and Kris’ [Kubik] plan”, which includes “narrowing down training to doing more mid-distance”.  Conger confirms the 500y freestyle is not in his repertoire this year; an arduous event schedule, as was typical his freshman year, has been scaled back this season to focus on his 100 and 200 backstroke races.  He also says he is “trying new things in the weight room that have been translating to the water.”

Within the interview, Conger also describes what it was like to meet one of Texas’ and America’s greatest backstrokers, Aaron Peirsol, in 2010.  The advice given to Conger by Peirsol is something Conger still remembers today, as he was told “It takes 1 or 2 great races to make your career.  You really can’t get mad over one Summer or one bad 200 back.”

Like that he is getting out of the 500 on day one at NCAAs. With refinements in training he will dividend out huge in the 100, 200 back.

Mel wrote recently that Sergio Lopez is one of the top 5 coaches in the sport now. I too would love to see his top 5 list. But let’s not waste time: Eddie Reese is the greatest living swim coach — and with due respect to Doc Counsilman and the other all timers — I think Reese is the greatest swim coach of all time. It isn’t even close. Reese has coached through so many changes in training science, swimming technology, rule and other changes like the underwater and turns evolutions and he has done all of that with highest performance levels. To a person I have never heard of a former UT swimmer who does not consider him a… Read more »

I think Jon Urbancek is at least Reese’s equal.

It is funny you should write that. Soonest I clicked the mouse I thought of Urbs. Same praises, such an all time great coach and also one of swimming’s treasured people. Salt of the earth.

You know there are also some great coaches outside of USA.

Bobo, the world is a big place but it isn’t filled with too many quite like Eddie and Urbs. Well taken though… Please add yours.

>To a person I have never heard of a former UT swimmer who does not consider him a second father figure and a great influence on their lives.

I met many ex-Horn swimmers and I made sure I got some Eddie stories from each of them. Most of them have stories where they make fun of him, but you can feel love they feel for that man.

Apart from French coaches (Lucas, Pellerin, Barnier….), a few Australian coaches (Frost, Cotterell….), Dutch Jacco Verhaeren and Russian Gennadi Touretski, I don’t know many other coaches outside of USA.
Sorry, I’m interested in swimming only since 2000 so I don’t have enough knowledges.
Mr Reese has such a long career. His longevity is impressive.

Greatest known coaches, Eddie is considered by many to be up there. Greatest actual coaches out there, there’s probably countless that you’ve never heard of who are truly the best coaches in the world. Building strokes from scratch and making elite athletes.

I have a lot of respect for Eddie and other coaches, but Eddie also gets a lot of the most talented swimmers in the world. I know the last step can be the hardest to coach, but he inherits a lot of incredible coaching from other people. Just to keep everything in perspective. I would put Marsh and Bottom up there for coaches in the US.

I still hope he swims 100 fly, 200 free and 209 back. Unless 200 free and 200 back are same day (too lazy to check). Something was wrong with his preparation last year. He looked sluggish at NCAAs. He will be much faster this year.

Psychodad – Although obviously not an NCAA meet, Conger did swim the 100 fly this morning in Austin, clocking the fastest prelim time of 52.64.

That is great news. His fly underwaters are so good but his back underwaters not so. Same kick but he does not do as well on his back. That is why I do not thikn he will do well on 100 back.

To thank you for bringing good new, I am going to play some Loretta Lynn now.

As far as last year, both Eddie and Jack have stated that Jack took a while to adjust to the new training, including weights, with the implication that he wasn’t fully rested at NCAA’s last year.