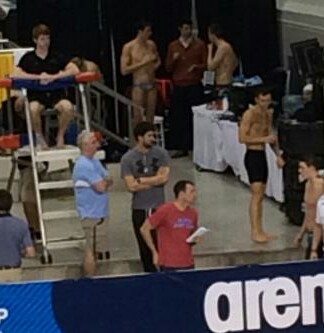 Austin, Texas – The Lee and Joe Jamail Swimming Center saw the greatest Olympian of all time on its deck this morning at the Arena Pro Swim Series Austin prelims.  Michael Phelps was seen standing poolside, along with Coach Bob Bowman, looking calm and relaxed, as he watched his fellow North Baltimore Aquatic Club (NBAC) teammates compete.  Phelps also was seen at U.S. Winter Nationals in December last year at the Greensboro Aquatic Center.

Phelps is in the midst of serving his 6-month suspension issued by USA Swimming last October for a DUI incident; a charge in which Phelps pleaded guilty and was sentenced to 18-months probation with a one-year suspended jail sentence.

It has been reported that Phelps will be present in a competitive capacity at the Chartres, France stop of the 2015 FINA World Cup Series, but no other competitions for the Olympian have yet been officially announced.

I wonder if he will talk to any of the media?

Probably not , just to keep focus on what matters now .

If it’s to answer useless questions, I think it would be a waste of time.

I don’t think the questions would necessarily be useless but it was the right decision to not meet with media. The focus should be on the competitors, not on him. He has too much stuff swirling around him right now that would be a distraction.

Love the man. Made some mistakes and has to accept them. Glad he was there to support his fellow swimmers.

I don’t really care one way or the other, but I am surprised that Phelps’s suspension allows him to be on deck/attend any sanctioned meet.

ole 99 – a few people had that same question, so we looked up the rule: USA Sw “303.4 A swimmer shall cease to be eligible to COMPETE in events conducted by USA Swimming”

He’s not a terrorist!

Not implying he is. As I stated, I don’t really care one way or another. I just thought it was interesting given my own, admittedly anecdotal and perhaps incorrect, recollection of other sports here in the US where suspended athletes are not allowed on the sidelines.

Well if it’s not appropriate for him to stand on the pool deck, someone should have stopped him, like Bob for starters. Anyone who cares about his well being shouldn’t permit him to break MORE rules! That’s the last thing he needs.