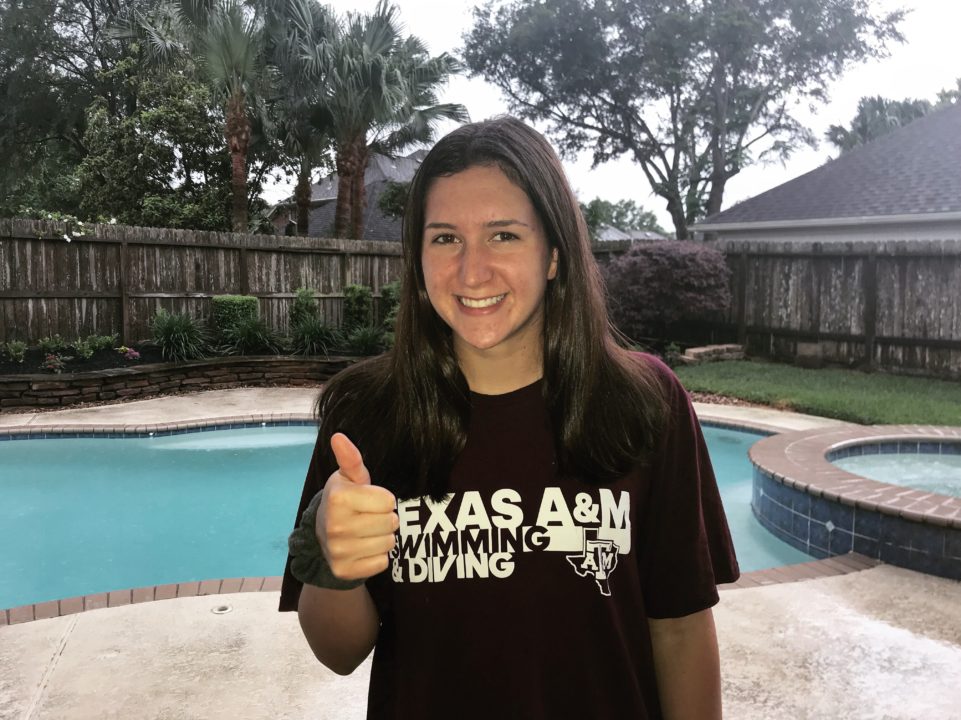 Olivia Theall tallied two individual wins to go along with her effort on the victorious 200 free relay team that clinched Texas A&M's victory over Kentucky.

Thursday’s thrilling SEC opener between Kentucky and Texas A&M came down to the last event of the afternoon on the women’s side.

Lauren Poole and Gillian Davey finished 1-2 in the 400 IM to give the Wildcat women a slight advantage heading into the last race of the day. But the Aggies reclaimed the lead with a 1-2 showing in the 200 free relay, clinching a 154-146 victory over the Kentucky women.

Theall, Bobbi Kennett, JoAnn Adler, and 50 free champion Manita Sathianchokwisan combined for a clutch 200 free relay win in 1:32.07 to seal the Aggies’ victory at the buzzer.

Claire McDaniels, a junior transfer from Pitt, picked up her first win at Kentucky in the 1-meter diving competition. Her score of 315.38 ranks her sixth in program history. Texas A&M senior Alyssa Clairmont took the 3-meter win with a score of 328.88 while placing second in the 1-meter (310.20).

On the men’s side, the Aggies cruised to a 177-111 win against the Wildcats behind big performances from senior Ethan Gogulski and freshman Baylor Nelson.

“We have a lot of respect for Kentucky and their ability to make this meet interesting,” Texas A&M head coach Jay Holmes said. “There were some really good races today and the 200 medley relay got us started the right way. They weren’t as fast as we would have liked to be, but we knew we had to win that to get the meet moving quickly. Kentucky is strong in a number of events, and we didn’t have the people to beat them in a few races, but it came down to our overall depth. I thought our 400 IM was really good today, especially as the last individual event of the meet. Our guys have been training really well and to have [Baylor Nelson, Anze Fers Erzen, Andres Puente and Maximiliano Vega] go out like that, it was really fun to see, especially to close out a dual meet.

“Baylor Nelson is really good wherever we put him, he makes a huge difference for us,” Holmes added. “Takuto [Endo] winning the 3-meter was also big for us, and it was really nice to see him step up and do that. Ethan Gogulski continues to do some really good things for us, winning the 100 back and then 200 back. We challenged the breaststrokers today, Andres [Puente] and Vincent [Ribeiro], it was good to see them come around and they did what they needed to do to get 1-2 in both events for us.”

Kentucky now has two weeks off before the Ohio State Invitational from Nov. 17-19 in Columbus, Ohio. The Aggies, on the other hand, have a quick turnaround, with another dual meet against TCU on Friday afternoon. The meet will be streamed on SEC Network+.

“Overall, we are always pleased to get a win over an SEC team because it’s never easy,” Holmes said. “The SEC is such a good conference and has so many great teams in it. And we are right back at it here tomorrow with TCU. It will be a very similar meet, TCU has some good swimmers as well, but we need to come in tomorrow and keep our heads about us and take it one race at a time.”