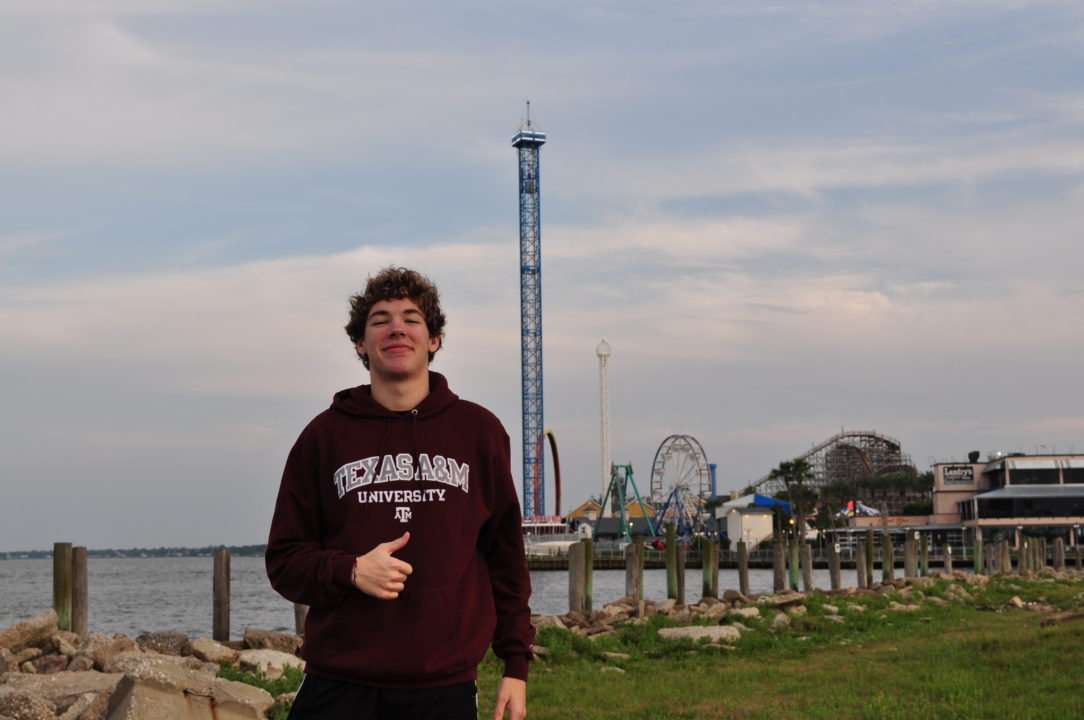 Texas A&M commit Seth Reno posted a 19.78 in the 50 freestyle, highlighting a weekend of fast swims at the UIL 6A Regional Championships. Archive photo via Seth Reno

The Texas High School State Championship post-season rolled on through the regional round last weekend. The penultimate level, between district and state championships, saw 8 regions at the Class 6A level, for Texas’ largest high schools, compete both for team titles and individual advancement to the state championship meet.

This season, because of new health and safety guideilnes related to COVID-19, only 16 swimmer per event in Class 6A advance to the State Championship meet: each of 8 region winners, plus the 8 next-fastest times overall. That’s as compared to the usual 24 State Championship qualifiers.

Keller High School came away with both the men’s and women’s titles at the site 1 meet, held in Mansfield, TX. However, the school didn’t hold the men’s title alone as Mansfield High School also scored a total of 298 points to tie for first.

Individually, freshman Elise Clift of Mansfield High School led the meet, winning both of her individual events in addition to contributing to a 1st place finish in the 200 medley relay.

On the men’s side, fellow freshman Cooper Lucas of Keller High School also came away with multiple individual wins. Lucas started the day by posting a time of 1:38.75 in the 200 freestyle, slicing a second off of the region 1-6A record in the event.

Southlake Carroll came away with the men’s meet title, scoring a total of 386 points. The school also won the women’s title with 329 points.

The Southlake men were led by their divers Manuel Borowski and Jackson Miller, who dominated the 1m event. Borowski scored a total of 531.05 points to place first while Miller finished in the runner-up position with 494.95 points.

The Southlake women saw Corbyn Cormack come away with 2 individual event victories. Cormack first won the 200 IM by almost 5 seconds, posting a time of 2:01.70. Later, Cormack swam to a time of 54.99 in the 100 butterfly, running away with the title by over 3 seconds.

Senior Malia Rausch from Austin Lake Travis posted two individual events wins in addition to contributing to a relay victory. Rausch touched the wall in a time of 1:48.14 in the 200 freestyle, claiming victory and dropping over 2 seconds off of her seed time. Later, Rausch swam to a time of 4:44.95 in the 500 freestyle, cutting over 11 seconds en route to victory.

On the men’s side, Sonny Wang of Round Rock Westwood had a big meet, sweeping the men’s freestyle events in near-record breaking fashion. Wang began the day by throwing down a freestyle split of 19.78 on Round Rock’s 200 medley relay. He later won the 50 freestyle by over a second, finishing in 20.27 to cut a second off of his best time.

The Woodlands High School won both the men’s and the women’s meets, coming in with scores of 375 and 562 points, respectively.

Paige Taber led the Conroe women, finishing with two individual victories in addition to a relay victory. Taber started the day by splitting 25.79 on the backstroke leg of the Conroe 200 medley relay, which finished first in 1:44.53. She then posted a time of 2:02.95 in the 200 IM, claiming victory with a best time by almost 2 seconds. Taber finished out her victories by winning the 100 backstroke, touching in a time of 55.07.

Notably, the boy’s meet saw no multi-event winners individually. Conroe’s Cotton Fields contributed one individual win in addition to key legs on two of the school’s relays. The senior began the day splitting 22.26 on the butterfly leg Conroe’s 200 medley relay, which finished first overall in 1:32.18. He then contested the 200 IM, finishing first in a time of 1:51.07 to cut over a second off of his best time. Fields then swam the 100 backstroke, where he came in 2nd overall with a time of 50.14. Closing out the meet, Fields split a 46.13 on Conroe’s winning 400 freestyle relay.

Taylor High School dominated the women’s meet, coming in over 100 points ahead of the runner-up Bridgeland High School with a score of 345 points. Houston Cypress Woods came away with the men’s title, finishing with 325 points.

The Houston Cypress men had a very strong showing in the 200 freestyle relay, where the team of Benjamin Scholl, Munzer Kabbara, Clay Crawford, and Luke DiMiceli threw down a time of 1:22.31 to set a new state record in the event. The previous record stood at a 1:22.54, set by Katy Cinco Ranch in 2016.

Texas A&M commit Seth Reno was a double-event winner for Clear Falls High School. Reno began his meet by swimming a best time of 19.78 in the 50 freestyle. With this, he came within a few tenths of the state record, which stands at a 19.49 set by Olympian Jimmy Feigen in 2008.

Clear Creek High School’s Cory Shanks had a sweep of the sprint freestyle events during the women’s meet. Shanks won the 50 freestyle in a time of 23.00, after posting a 22.99 during the prelims session. She then returned to swim a 49.92 in the 100 freestyle, coming in almost 2 seconds ahead of the field.

Unfortunately, there were no results available for region 7.

Alexander High School won the boy’s meet with a score of 348, while Los Fresnos Cisd came away with the women’s title, scoring 418 points.

The Los Fresnos women were led by sophomore Jada Ashford, who came away from the meet with 2 individual first place finishes. Ashford swept the sprint freestyle events, posting times of 24.22 in the 50 freestyle and 53.81 in the 100 freestyle.

Who names their kid Cotton Fields? He certainly put in a lot of work and posted some fast times. Is this a “Boy Named Sue” thing?

Should’ve asked what his brother’s name is.

Who names their kid Boomer?

For the record, Texas high school athletics (including swimming) is run by the University Interscholastic League (UIL) and not the Texas Interscholastic Swim Coaches Association (TISCA).

The 2021 UIL District and Regional Championships have now been held. The UIL State Meet is presently scheduled to be help in San Antonio rather than The University of Texas at Austin.