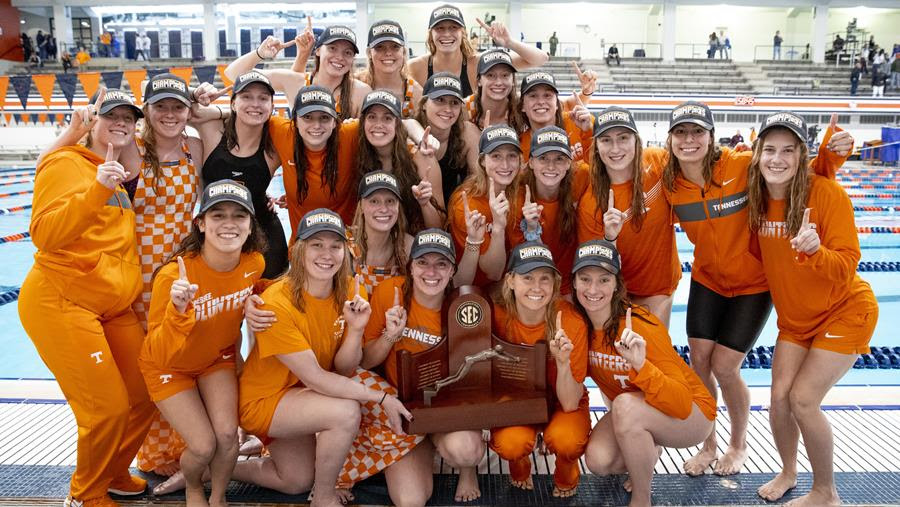 The defending SEC Champion Tennessee Volunteers women will kick off their season with an intrasquad meet in about 2 weeks. Archive photo via Tennessee Athletics

While essentially nobody in college swimming yet has a firm collegiate championship schedule to work backward from yet for the 2020-2021 season, seasons for a few teams are beginning to take shape across the country.

One team that has sculpted out the beginnings of a season schedule are the Tennessee Volunteers, including the defending SEC Champion Volunteer women’s team.

This is all presented with the word tentative in big bold letters, because like everything during the season of coronavirus, the circumstances, and the policies of what’s allowed and not allowed, can change quickly.

The team’s first planned meet is an Intrasquad planned for October 10. “Events” are still not supposed to be happening on campus, so this might be framed as more of a “fast practice,” and it’s unclear if any results will be made public.

In Late October, tentatively the 29th and 30th, the team has a dual meet scheduled with SEC foes Kentucky. Of meets we know about so far, this is the first big intercollegiate dual meet on anybody’s schedule, and will include a faceoff between the #1 and #3 teams at last year’s SEC Championship meet on the women’s side, and the #6 and #7 teams on the men’s side.

They are hoping then for Kentucky to make a return trip in January, with overnight trips being strongly discouraged. The two programs are only about a two-and-a-half hour drive apart.

The Volunteers have a “tentative but pretty solid” agreement with Alabama and Virginia to do an ‘invitation style meet” in Knoxville the weekend before Thanksgiving. Nationally, there will be a major re-envisioning of the traditional mid-season invitational. So far some teams, like those in the Pac-12, are not allowed to race until at least January, and those schools that are will mostly limit the number of individuals allowed in the facility at any given time.

The teams plan to score that event as a double dual so that it can count as 2 competitions.

Tennessee also has a dual meet scheduled against the Georgia Bulldogs for January 23rd, which is the teams’ traditional weekend to race. Athens and Knoxville are only about 4 hours apart by bus.

Tennessee head coach Matt Kredich says that for him, and other coaches that he’s spoken to, meeting the NCAA mandated 6 minimum competitions this season has been a challenge in scheduling, with the Pac-12 and Big Ten starting late (January 1), and many mid-major conferences not having a clear start date at all.

He is expecting that there could be some relief from that, though, given the circumstances.

The SEC has told member institutions that they can start their swimming & diving seasons on October 1 with dual meets only. Regular seasons must end no later than January 25, 2021 under current guidelines.

Last season, the Tennessee men were seeded to score 32 swimming points, 20th most, at the NCAA Championships before that meet was canceled because of the burgeoning coronavirus pandemic.

The Tennessee women were seeded to finish 2nd at NCAAs, behind only the Virginia Cavaliers. That sets up for a juggernaut matchup if the pre-Thanksgiving invite works out in November.

Tennessee MEN are on the path to win the SEC meet in 3 years and NCAAs in 5 years. Coach Asti is the best!

SECs, they have a tough Georgia team and the always dominant Florida team to contend with.

NCAAs, the standard Top 5 are having some great classes being brought in.

Not saying it isn’t possible. The Lady Vols have revamped that program under Coach Kredich so the men have a good chance too.