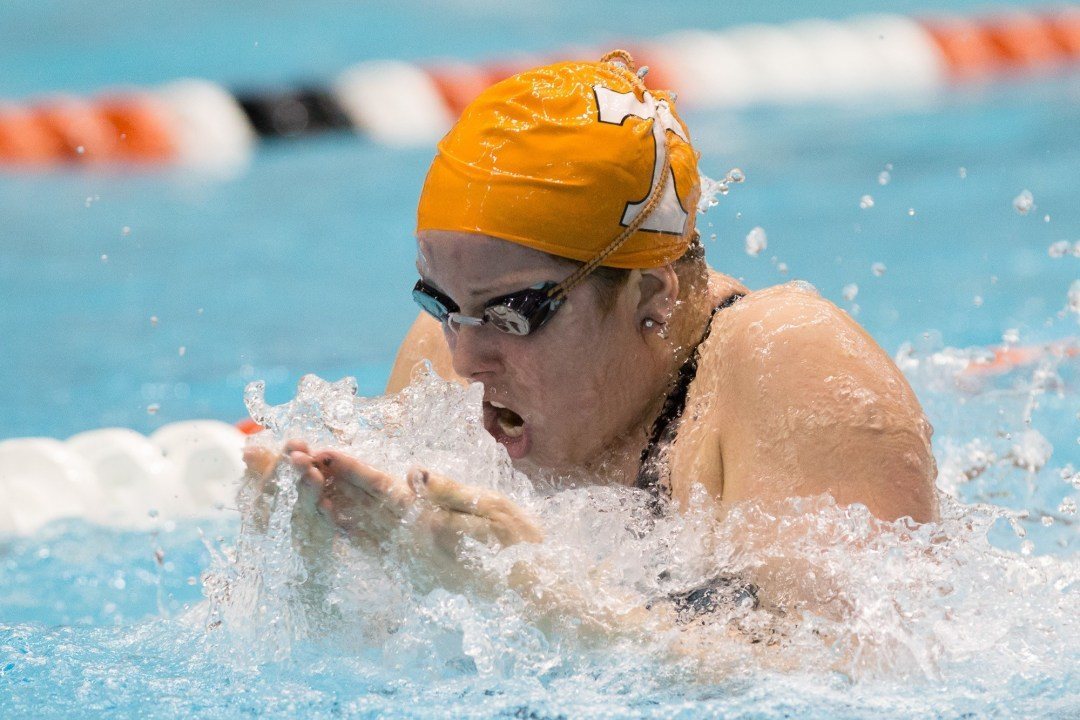 The Tennessee Volunteers cruised to road SEC victories over LSU Saturday, with the Tennessee men coming down with a clean sweep of all 16 events. Archive photo via Tim Binning/TheSwimPictures.com

The Tennessee Volunteers cruised to road SEC victories over LSU Saturday, with the Tennessee men coming down with a clean sweep of all 16 events.

That was keyed by a 3-win night from freshman Sam McHugh. Meanwhile, the Volunteer women took 9 of 16 events, including a breaststroke sweep by Molly Hannis and a near-freestyle sweep from Faith Johnson and Madeline Tegner.

Things went back and forth early on, but the Vols put together a 4-event win streak late in the meet to power away with a 159-135 victory.

The only freestyle event that LSU could steal was the 200, where junior Megan Cox just nipped Tennessee junior Mary Griffith 1:48.58 to 1:48.75.

Meanwhile Hannis rampaged through the breaststrokes, winning both with ease. Her 1:00.43 paced the 100, and she took the 200 in 2:10.09, winning by over six seconds. She also split 27.52 to essentially win the 200 medley for her team, outsplitting LSU’s breaststroke leg by almost a full second.

The two teams traded blows early, but Johnson’s 100 free win (also over LSU’s Carter) set off a 4-event run that ultimately doomed the Tigers. Anna DeMonte won the 200 back in 1:58.30 before Hannis took the 200 breast and Tegner the 500 free for Tennessee.

Freshman Sam McHugh was Tennessee’s most highly-touted recruit last offseason, and he’s shown up big already in his rookie year. McHugh won three times to power Tennessee past the Tigers in a clean 16-for-16 sweep.

Also winning multiple races was redshirt senior Troy Tillman, who swept the sprints. Tillman won a tight 50 free battle 20.63 to 20.67 over teammate Chris Sadsad, then took the 100 free in 44.98.

Tillman was also 19.7 anchoring the 200 medley relay, which won in a nice 1:27.71. The big difference-maker there was breaststroke Peter John Stevens, who split 24.1 to add nearly 1.5 seconds to the Tennessee lead at the half-way mark.

Maurico Robles, coming off a big weekend at the Tennessee Diving Invite, took both diving wins, scoring 351.23 on 1-meter and 401.03 on the higher springboard.