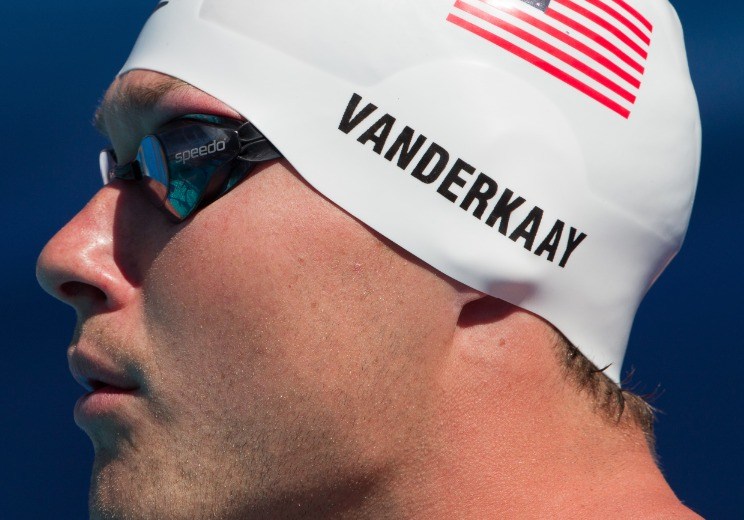 Contributor Josh Davis is a 5-time Olympic medalist and the Manager Partner the Mutual of Omaha BREAKout Swim Clinics.

February 12, 2013 Three significant men were born this day in history.  Arguably the greatest US President, Abraham Lincoln was born in Kentucky in 1809.  Charles Darwin, the British naturalist whose ideas changed the world, was also born that same day in 1809.  And in my opinion, the greatest US middle distance freestyler was born 29 years ago in 1984 in Michigan.

No other 200 and 400/500 freestyler in US history has had more dominance and longevity than Peter Vanderkaay.  PVK, as we call him, deserves a special thank you as we celebrate his life and 10 years of service to USA Swimming (2003-2012).  Here is an interview I conducted with Peter today.

JOSH: What was it like growing up in Rochester, MI and when did you start swimming?

PVK: Rochester is a nice suburb of Detroit and I have great memories going to one of the many lakes with my 3 brothers and parents.  It was a natural progression for us to start swimming at the neighborhood summer league when I was 7 and then ultimately the Oakland Live Y’ers club team.  I really had a great childhood.  I chose to represent the Oakland Live Y’ers at my last trials in 2012 as a way to honor my old coach Jeff Cooper and the club that gave me such a great foundation.

JOSH: What was your most embarrassing moment?

At 8 years old I was invited to my first big meet at the IUPUI Aquatic Center.  I was asked to race on the 9-10 relay with the ‘big boys’!  My mom drove me 4 hours to Indy for this one relay race.  I was so pumped to impress the older guys that when I went to do my turn I completely missed the wall and pushed off with nothing but water.  I disqualified the relay and got back in the car and sulked the four hours back home.  Thankfully my mom giggled the whole way and told me not to worry about it.  Even though I wasn’t laughing at the time I can laugh about it now.   My performance on relays got much better after that.

JOSH: You embody the ideas that your birthday mates stood for.  Lincoln, who turns out was same height as you 6’4, was a late bloomer and had a “never give up” attitude and Darwin gave us “survival of the fittest”.  You talk about at the clinics how you were not this amazing age group swimmer.  How did you stay motivated in middle school and high school?

PVK: I trusted that the consistency would pay off.  I knew I would grow someday. I knew that the hard work would come back to me and help set me apart.  I quickly noticed that the amount of effort and focus I put in was directly related to the success I put out.  Plus I enjoyed the social aspect of being with my brothers and friends.

JOSH: You graduated high school in 2002 and then 2 years later you’re on the gold medal podium in Athens with Michael and Ryan!  What were the ingredients for that kind of trajectory?

PVK: My senior year I broke the Michigan state record in the 500yd free with a good time of 4:23.  That’s when I thought I could be on track for good things at the University of Michigan and possibly the USA team.  When I arrived at Michigan some of my training partners were Klete Keller, Chris Thompson, Tom Malchow, Dan Ketchum, and Davis Tarwater.  Obviously being pushed by these guys under the great John Urbanchek was huge.  So great coaching, growing up, getting stronger, improving technique and, again, more consistency all came together to get me to my first Olympics at 20 years old.

“I texted PVK at midnight last night because I wanted to be the first to wish him Happy Bday in this last year of his 20’s. I had the privilege of coaching a Vanderkaay swimmer for 12 years in a row. Obviously Peter, like his brothers, was a coaches a dream. Very seldom do you come across someone who is so coachable, works so hard and is a team player. He did a great job in London as team captain and when people here the initials PVK they think greatness. His club coach Jack Cooper and his family is who really made Peter and I just got to put the icing on the cake. I just wanted to be the first to wish him Happy Birthday and glad to call him a friend for life.”

PVK: Probably that first one in Athens was my favorite because it was so close. Touching out the Aussies by .13 hundredths to get the gold was so exciting.  Also to anchor the 2008 Beijing relay and be 3 body lengths ahead and the only person on the TV screen was kind of cool too.

PVK: The 2008 Trials 400m free was a great “dog fight” between Larsen Jensen, Erik Vendt and I but personally, getting the bronze in London meant the most.   After getting 4th in Beijing and then in 2012 I dropped 3 seconds from Trials(3:47.67) to the London Games (3:44.69) to finish my career with an individual medal was pretty special.

JOSH: I have an image of you swimming at the OTC in Colorado Springs during Christmas training in January of 2008.  The whole Michigan team and even Phelps was broken down and swimming pretty slow.  That particular day you were the slowest but you seemed to be the least worried about it. Honestly, even I was a little worried.  But a month later you swam the fastest 500yd free ever and had a stellar Beijing Olympics qualifying for 4 events.  How do you stay focused thru fatigue?

PVK: Those times of fatigue are going to happen but you have to stick to the plan.  If you’re constantly deviating from the plan you’re not going to reach your goals.  I learned these lessons progressively in high school and college but I was always watching other successful people.  I trained with Phelps for 4 years and Lochte for 2 years and they weren’t the fastest every day.  They did their best, held the stroke and just kept showing up.  I was always learning from the greats I trained with on how to focus on what you can control and enjoy the journey.

JOSH: You and your 3 brothers (Christian, Peter, Alex and Dane) all swam at Michigan, all of you were outstanding students, and all of you have a reputation for your work ethic, politeness and humility.  What is something your mom and dad did to raise such great men?

PVK: They were always just so positive and supportive.  Even when all 4 of us were racing at the 2008 Olympic Trials, they were just as excited to cheer for my 3 brothers as they were for me.  I am so thankful for my parents love and support.

JOSH: What is your present vocation and goals for the future?

PVK: I am now retired and working with an internet company and once again trusting that the hard work and consistency will pay off.  I still love to do clinics and pass on the lessons I learned to the next generation of swimmers.

JOSH: I would like to say a big congratulation to your parents, Mr. and Mrs. Vanderkaay!   Thanks for raising a great son!  And thank you Peter for all your efforts and leadership on the USA Team these last 10 years.  Happy Birthday PVK!

PVK: Thanks Josh I look forward to racing you and the kids at a clinic soon!

If you would like to have Peter come to your team or any of the 50 Olympians available for clinics contact www.breakoutswimclinic.com.

I love it! Oakland Livewires. Hahahahaha!

PVK is officially retired. Thank you for the information. I have learned something.

It is Jeff Cooper who was his home club coach.
PVK is a great person. I am sure he will be success in whatever he does in life.