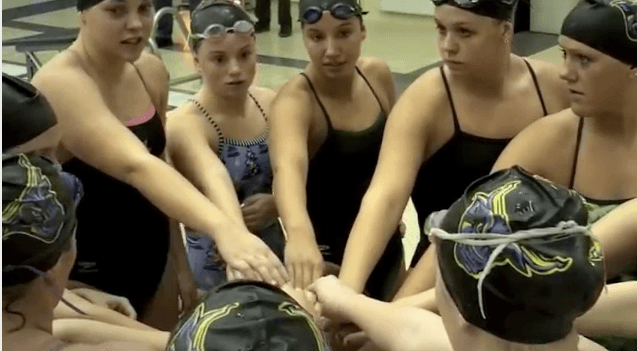 This article, along with the video, was sent to SwimSwam by Toni Armstrong, Assistant Coach at Minnesota State University Mankato.

Over 8,000 athletes in the swimming community participated in The Seventh Annual Ted Mullin’s “Leave it in the Pool” Hour of Power relays yesterday, November 13, 2012.  What began in November 2006 as a grieving method for Carleton College, after teammate Ted Mullin passed due to sarcoma, has turned into an annual event bringing awareness to communities about this rare form of cancer.

Minnesota State University Mankato’s Women Swim Team participated in their fourth annual Hour of Power by swimming three continuous relays.  The Lady Mav’s swam different strokes and different distances during the hour—some ladies, like Senior Nicole Blum, swam their entire hour butterfly. “Ted Mullins battled sarcoma for four years, which could not have been an easy road” Blum explained.  “I wanted to honor his life with something that would be a challenge to me in recognition of the challenges he had to face.”

During the past two years, Mullin’s family members Louis Villaume and his son Bob have visited the MNSU Pool during the event in an effort to share their insights into Ted’s Life.  Villaume has also made sure to educate the ladies about sarcoma and the importance in bringing awareness to this rare disease that attacks healthy young adults. “This event has made a powerful impact on our team, “ Head Coach Nathan Owens declared. “Their energy, focus, and effort during the Hour of Power is heightened. “

Junior Alyssa Larson swam a season best time in the 100 fly during one of her legs of the relay. “I’ve never felt like I was going to vomit during a practice more than I do right now!“ She celebrated as she climbed out of the pool.

So far, The Hour of Power has successfully raised over half a million dollars for the sarcoma research center for The Comers Children’s Hospital at The University of Chicago, while fostering a sense of teamwork, support for the swimming community, and passion among the teams in participation.

To learn more about The Hour of Power, please visit:  www.tedmullinfund.org.

“It’s a growing movement within the swimming community that is raising more money and awareness each year” said Coach Owens at the conclusion of the event. “We are proud to be a part of it!”