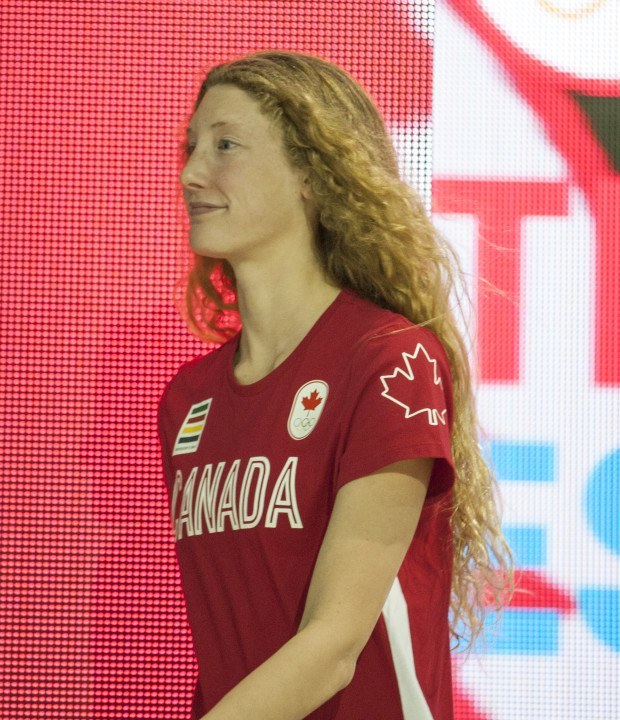 Two-time Olympic medalist Taylor Ruck is moving up to Canada to train with the High Performance Centre – Ontario.  Lead by Ben Titley, the squad of Penny Oleksiak, Michelle Toro, Chantal Van Landeghem, Rebecca Smith, Kayla Sanchez, Sandrine Mainville, and Richard Funk will welcome Taylor Ruck early this summer.   Ruck will fit in nicely with this group – it’s almost as though the program was built for her.  She is a junior world record holder, a Short Course World Championships medalist, and has two Olympic medals to her name.   Surrounded with like-minded and other goal-oriented swimmers, Ruck will be in an environment where she can focus on meters swimming and getting back to her world leading times she posted this past summer.

Ruck was born in Kelowna, British Columbia. When she was ten months old her family moved to Arizona and she has been training in Scottsdale with her Coach Kevin Zacher up to this point in her career. The Scottsdale Aquatic Club currently has approximately 270 swimmers divided into ten groups with 24-36 swimmers in each group. The 16-year-old will leave her club team and high school and shift her focus to metres swimming in Canada.

Editor’s Note: a previous version of this article said Ruck moved to Arizona at 3 years old.

Ruck’s new environment will give her access to everything she needs to succeed in the pool.  From her own lane space, to world class support services such as sport science, medical support, and massage therapy.  Ruck will be attending high school and living with a billet-host family in Canada for the next year and 3 months. Ben Titley said “Having Ruck train every day with the other girls her age (Rebecca Smith, Penny Oleksiak, Kayla Sanchez) will be beneficial for everyone as will being around and learning from the other seasoned swimmers like Chantel Van Landegham, Sandrine Mainville, Richard Funk and Michelle Toro (Williams).

Supportive of her decision, her club coach Kevin Zacher will continue to play a role in Ruck’s swimming.  Ruck said “I would not be where I am today without Kevin. However, as I am moving to Toronto for summer and next year, he will play less of a role in the training aspect.” She continued, “He knows how passionate I am about pursuing my goals and that this is an amazing opportunity for me.” Although Ruck is making the move to Canada to finish high school, her college plans have not changed.  She is still looking to go to college in the USA and compete in the NCAA.

Taylor Ruck will be heading to Jr. World Championships at the end of August with Oleksiak, Rebecca Smith, and Sanchez.  Before that, Ruck will be competing at Mare Nostrum in June, and another meet that is yet to be decided.

Good Luck T-Ruck! We wish you the best! T-Rowe family!

does this possibly mean she wont be looking at college swimming here in the U.S??

I’ve been visiting the High Performance Center Ontario all week, have been on the pool deck or in the weight room with Head Coach Ben Titley and his outstanding staff for every session. I can tell you the article only touches the tip of the iceberg in describing this program. As a club coach from America, what I see as the major benefit is the educational support provided for these athletes. Anyone of high school or college age, with international podium goals, and for whom education is a priority, this is the place to be. Added to the HPC full time staff in November 2016 is a professional educator who directly serves the athletes as a daily tutor with both… Read more »

I heard that Trump’s ICE patrol deported her for being a bad hombre. ?

Arizona Swimming will miss Ms. Ruck: such a fierce racer in the pool, but still so humble with all of her accomplishments. I still feel sorry for all the future AZ girls who look at the records that she rewrote across the age groups! Good luck in Toronto and convince the HPC to come out to the Mesa PSS next spring 😉

I posted after the Canadian trials that she should join the High Performance team, so I think this is perfect for her. It will definitely push her to new levels — look what it did for Oleksiak last year, and Sanchez and Smith are showing good progress this year.

It is a great facility with great coaching, and it will build camaraderie with her other Canadian teammates that she will likely be on relays in the future.