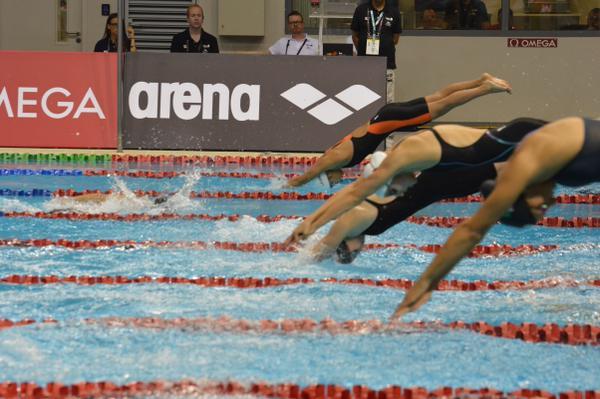 Australia's Tamsin Cook pulled off a 2-for-1 on opening night of FINA's Junior World Championships, breaking the championship record in the 100 free while leading off the junior world record-setting 4x100 free relay. Current photo via @FINA1908 on Twitter

Australia’s Tamsin Cook pulled off a 2-for-1 on opening night of FINA’s Junior World Championships, breaking the championship record in the 200 free while leading off the junior world record-setting 4×200 free relay.

Cook went 1:58.16 on her leg, which is nearly a full second better than the previous meet record in the individual 200 free. That was the fastest leadoff leg in the race, also by almost a full second, and gave the Australian team clean water and a lead they’d never relinquish during the nearly-eight-minute race.

The previous championships record in the 200 free was a 1:58.93 set by Canada’s Brittany MacLean in 2011. MacLean, of course, has gone on to NCAA and international success for the Canadians throughout the freestyle distances.

Here’s a splits comparison of Cook and MacLean:

Cook used her superior front-end speed to jump ahead of MacLean’s record, which makes sense as MacLean is more known as a distance swimmer. But Cook showed some great endurance, coming home in 30.00, just a hundredth off MacLean’s split.

Though Cook gets to celebrate two records tonight (Australia’s relay time of 7:56.68 smashed the previous junior world record), this mark could be short-lived, as Cook will likely have to re-break it in the individual event if she wants to keep it.

That’s because Canada’s Taylor Ruck dropped a huge 1:56.71 split to help her team win silver. Ruck had the advantage of a relay start and perhaps some swimmers ahead of her to draft off of, but she’ll still be a huge threat to Cook in the individual 200 free.

That event will take place on Sunday, the final day of competition in Singapore.

The Canadians were silver, not bronze

The irony is that Tamsin Cook won’t even swim the individual 200m free. She’s pencilled in as the fastest seed for tomorrow’s (Fri) 400m Free and will back up for Saturday’s 1500m free. Tamsin was selected on the Australian Junior Worlds team, in part, off the back of an 800m free gold medal swim at the Australian Age Champs and an 800m bronze at the Australian Open LC Championships earlier this year. She dropped the 800m free this week in favour of last night’s 200m Fly in which she collected a silver medal. Stand by for more good news from this girl!