Taking 5 With Dylan Gravley: The Brothers Gravley In The Open Sea 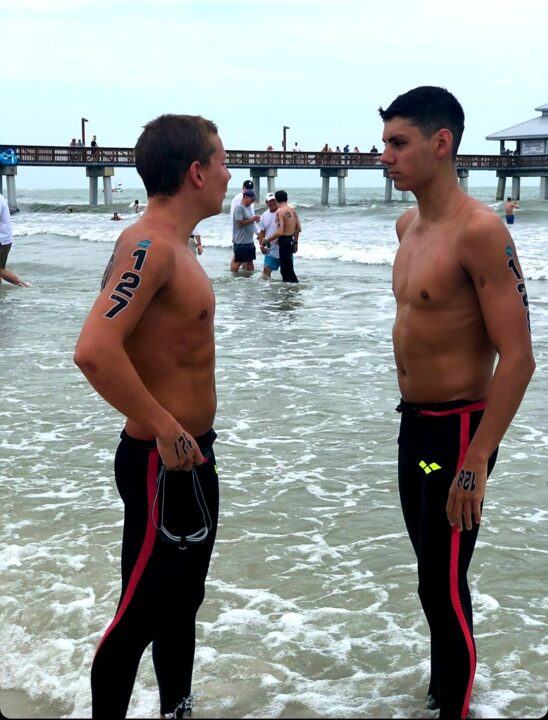 A conversation with Dylan Gravley on his performance at nationals, his open water acumen, and some advice for fellow swimmers attempting open water. Current photo via Michelle Gravley

Last week at Open Water Nationals in Fort Myers, Florida, two brothers were second and third in the 10k behind Frenchman Axel Reymond. Both brothers are U.S. National team members. Brennan Gravley was second, and his brother Dylan Gravley, placed third. The 10k is an Olympic Event. It is a tough race, mentally, physically and emotionally. I was able to catch up with Dylan recently about the race, his open water acumen, and his advice for fellow swimmers attempting open water.

Q: Last week at Open Water Nationals, Brennan was second and you were third. Tell me about the race. Do you look for each other, pace off each other, or just end up together?

A: The race was a lot of fun! Much more people and much more waves compared to last year. If I’m being honest, I definitely do use my brother as a marker in open water races. I typically search for him, however, it usually doesn’t go the other way. Brennan right now, in terms of speed, is in a place where he can dictate the race. I, however, am not. Therefore, I place full faith in my brother that he will be in a place where if I can just hang with him I will finish well. In summary, I just try to be as close as possible to him so that I may finish near his assured success.

Q: You used to be a breaststroker. When and how did you make the switch to open water?

A: I actually haven’t really made much of a switch. My breaststroke started getting good at about 10 years of age and I have been able to hold onto it pretty well ever since. Even now, my breaststroke is a critical part of my 400 IM ( which is the 3rd event in which I compete for ASU in). One of the things I have been quite proud of as of late is my ability to retain my breaststroke ability while still doing open water, something you don’t typically see much of in the sport.

Q: Your club team, the Sandpipers of Nevada, under Ron Aitken, is the new powerhouse in swimming. From the landlocked state of Nevada, how do you prepare to deal with the ocean?

A: Being in Nevada is actually not terrible in terms of open water opportunities! We actually spent a good majority of quarantine practicing in Lake Mead which is just outside of Las Vegas. We host a National Team qualification event in the area now, so we have quite good access! Previously, we’ve only had the same meets as everyone else in terms of open water, so it really came down to grinding it out in the pool.

Q: Traveling the world and racing with your brother must be a unique and amazing experience. Do you derive power and support from each other or is it sibling rivalry on an International scale?

A: My brother and I are definitely a source of power for each other. We definitely feed off of each other’s passion for the sport, and we have a lot of fun when we are racing each other. Being in a race with someone who you know so well is great, and our shared desire to win pushes each of us further and further every time. My brother’s unwillingness to be beat and my fervent desire to make it to the top, make a perfect combination that sees us improving every time we compete. On top of that, the rivalry we share increases every race as we get closer and closer in ability and ranking.

Q: Any advice for landlocked open water swimmers? What is your favorite workout?

A: Some advice for landlocked open water swimmers is: train as hard as you can so you can bring down your aerobic base. You want to put yourself in the best position physically so that you may let your race instincts do the work. This is because when race time comes, it’s about the person who has both the best race instincts and the highest aerobic capacity so that they expend the least energy.

My favorite practice that I’ve done of late goes like this: (SCY)

Very high amounts of rest in this workout, but that’s what makes it fun!

Closing speed is the focus here which is why there is so much descending.

A rumor going around Ft. Myers last week during OW Nationals was that the Gravley brothers once ran a Sizzler buffet out of business when they stopped to eat following a swim meet.

Hats off to ASU Asst Coach Logan Hirka as well. Logan is the distance coach at ASU and spends countless hours on deck working with Dylan. Many times the two of them are the first in and last out.