What Does It Take to Make It Back? Day Four 100 Free Extended Edition 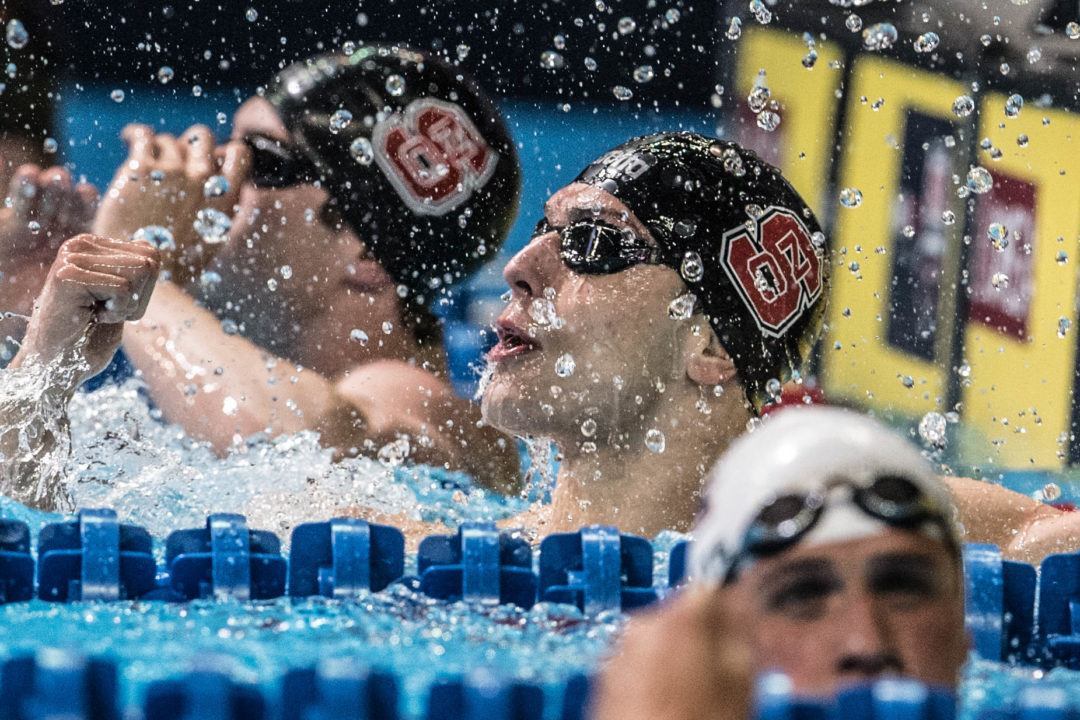 Ryan Held swam a personal best in the prelims of the men's 100 free this morning, part of a preliminary round that was significantly faster than in 2012. Current photo via Mike Lewis/Ola Vista Photography

Here’s the comparison of events from this morning:

As tends to happen, it took quicker times to guarantee making it back to semis today in the men’s 100 free and the women’s 200 fly than it did in 2012.  In the last event of the morning, the men’s 200 breast, the 16th place time was almost a second slower than in 2012, although the top end was stronger, highlighted by Kevin Cordes holding pace with the world record line through the first 150m.

While compiling the 16th-placed times, we noticed something else — the top end of the men’s 100 free prelims was a heckuva lot faster this morning than it was in 2012.  Here’s a side-by-side comparison of the top 16 places from 2012 and today.

Four years ago, no one was under 49 in the prelims.  This year, four men cracked that barrier, led by Nathan Adrian‘s 48.43.  The fastest prelims swim in 2012 would have actually only ranked 6th this morning.  Maybe even more significantly, the top two times from this morning would have also been the top two times in the 2012 final of this event.  This morning, Ryan Held‘s 48.46, a new lifetime best for him, was the exact same time that Cullen Jones swam in the 2012 final that qualified him for an indiviudal swim in London.

Granted, this morning was not as fast the 2008 prelims.  That year, aided by full body suits like the Speedo LZR, ten men swam under 49 in prelims.  Two even swam under 48: Michael Phelps and Garrett Weber-Gale, who set an American Record.  But those suits and the crazy times the produced are long gone, and while there are still two rounds to go, the early returns from this morning should be cause for optimism for US fans, at least among those who are of the glass half full variety.

Irrelevant to this article but if jay Litherlands teammates don’t call him juicy jay or something similar I’ll be dissapointed in them.

I honestly think he shut it down a bit and wanted to save it for tonight or the final.

Wish one more person would have scratched so Michael Chadwick could have gotten another shot. With his start he easily lost atleast a second in my opinion. Was a full body length behind the worst starter in the world Anthony ervin(sorry love you as a swimmer but that start is brutal!). Also would shave loved to see what Murphy could throw down in long course 100 free and think their going to need conger in RIO if they want a medal.

Anyone know or see what happened on Chadwick’s start? I also noticed at the 15m mark he was already well out of it but I missed the start itself. I wonder if he slipped or didn’t hear the signal or what.

Is NBC going to make any effort to show the 100 meter freestyle semifinals? Why are they being so lazy with their coverage?

I cannot believe nolan will not be an olympian in ’16