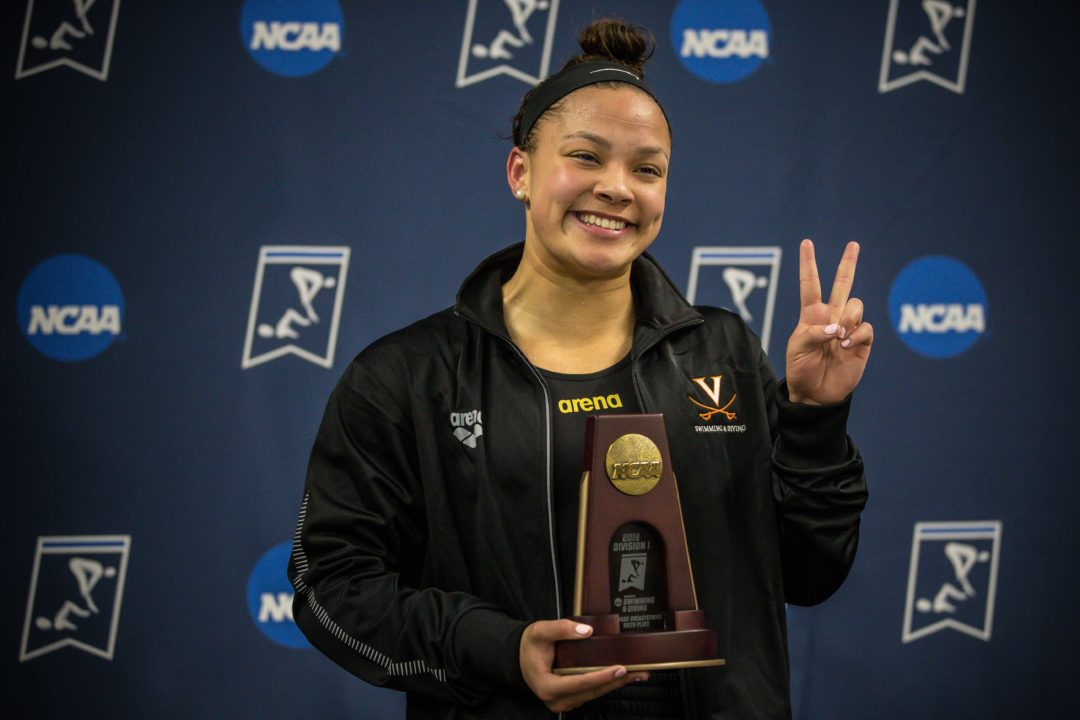 Wenger walked us through how the team has moved forward and set their sights on the upcoming season for another shot at the title.  Current photo via Jack Spitser/Spitser Photography

We sat down with Virginia team captain Alexis Wenger, who is just about to start her junior campaign with the hoos. Wenger talked us through her swimming career and how she ended up swimming for Todd DeSorbo in Charlottesville, as well as her first season. She was candid about her freshman year being a big transition, and the first couple of months being a difficult time. However, Wenger started seeing improvements once she made it over the hump, and became a key player for UVA her freshman and sophomore years.

This year in particular, she was a major player in a team that was ready to challenge for an NCAA title, as the team was seeded 1st in the psych sheets and Wenger was seeded 2nd in the 100 breast. Wenger walked us through how the team has moved forward and set their sights on the upcoming season for another shot at the title.

Wenger also walked us through growing up as a bi-racial woman, and although she says she didn’t have any blatantly racist experiences, she’s doing what she can now to educate herself and be a leader in her community to this social cause. She’s starting to think forward of how we can make change not only 5 days or 5 weeks from now, but 5 months, 5 years, and beyond.

UVA would have won NCAA’s had they not been cancelled. Wasn’t Stanford seeded like 8th or something? Probably wouldn’t have done that bad, but honestly 3rd or 4th wouldn’t have been out of the question.

UVA will be great next year, but too bad for them Stanford brings in Ruck and Regan next year

Yeah even with the reinforcements UVA has coming in, I actually think they had a better shot this past year than the one coming up

Are we sure Ruck is returning?

Everyone I talk to says that the “I’m not sure yet” that she told us is genuine, not just avoiding telling the world. I think she’s waiting to make a decision until she has a full understanding of what her training would look like in both California and Toronto.

I don’t blame her.

Womans VOLS mighta won cause they beat UVA in dual and at invite!

@ladyvoldisser… do you nor understand that Vols had little if no chance of winning NCAAs. Though the team is great (right now), most of their swimmers were tapered for SECs to win that (even the very fast ones). UVA swimmers (al least the most elite) were not! But rest assured A&M will come back to the top!

I should have said… “though the team is on the RISE (right now)” The team has always been great!

The women VOLS will not yield to A+M or any other conference team. How do you know “most of their swimmers were tapered for SECs”?????? also UVA is 0-2 the last two outings…the record speaks! Why can’t people accept that our girls had a great shot of winning NCAAs?

We cant accept it because its not true!

The truth is what YOU say it is?? Pretty arrogant! Also are you telling me the UVA divers would have made a difference? Thinking of buying an NCAA Team Trophy and delivering it to the coaches and team for their probable win at NCAAs last year. Dont worry, I will also make a crayon written certificate for A+M awarding them a top 15 NCAA mythical finish.

And I think you keep forgettng that UVA didnt bring their divers to the midseason invite and Vols did which contributed to their victory over UVA.

Technically I believe swimswam did an article on that invite because so many people were bringing up who brought divers and who didn’t. Even with diving scores taken out at that meet Tennessee won by quite a bit.

Well done Alexis. Thank your for sharing your insights.