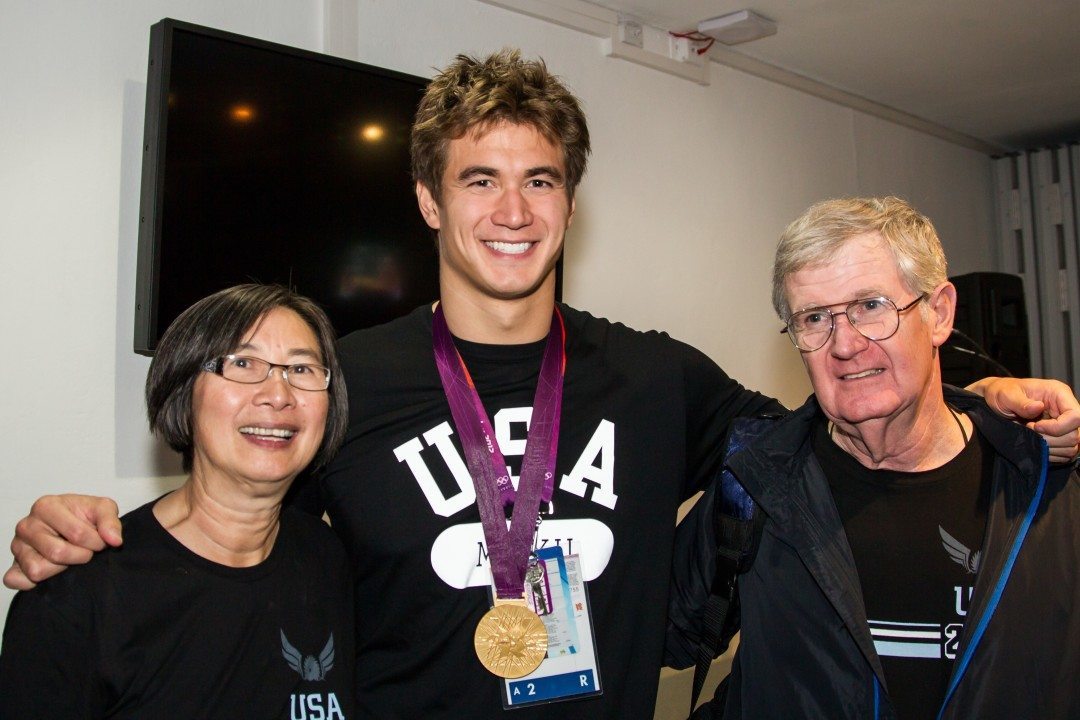 I was born and raised in Hong Kong. I am the second youngest of 7 children. I grew up around water and learned how to swim when I was little but was never a competitive swimmer.

Nathan is not our first child who earned an athletic scholarship in swimming. Our oldest daughter, Donella earned a partial swimming scholarship and swam for ASU. Justin, our second child got a full ride and swam for University of Washington.

We knew Nathan was a good swimmer because often times the local regional swimmers would come up to me and asked when Nathan was going to age up.

The last year of his high school year he broke a 25 years old Washington State record in 200 free held by Ugur Taner 1992. Then we knew that he was really good when he was recruited by Stanford, UC Berkeley, University of Auburn and University of Texas. I did not think he was exceptional until he made his first international meet in Manchester England 2008.

We have allowed Nathan a lot of freedom to make choices in his life, the only criteria is that his academic grades would not suffer; whatever he did ( does ) he has to stick with it, start to finish; and all we ask is he does his best. When he was in 7th grade, he wanted to leave our local swim team and join the Tacoma Swim Team which is 40 miles away. We made that trip to Tacoma for 6 years, snow or shine and never looked back.

If you asked my first born, Donella, she would agree that I am more tough on her than I am on her brothers. Honestly I treat them the same. I expected them do their best whatever they want to do. Whatever they set out to do, they have to finish. Education is important. Working hard is a key to success.

My swimmers and their coaches do all the hard work. I am just a cheerleader to cheer them on. Along the swimming lane/path, we meet lots of wonderful families.

After Nathan finished his freshman year 2007, his college coach moved to Florida Keys and Nathan asked to move to Florida to train with him. “What about school?” “You let your scholarship go? Who is paying for your expenses?” There were a lot of ‘what ifs’. The ultimate decision was on him, we trusted his judgment. He stayed down in the Florida Keys until the ‘08 Olympic Trials and he was rewarded with a spot on the Olympic Team. He kept his promise and returned to Berkeley and graduated in 2012.

No doubt it was the moment he won the 100 free in the London Olympics.

Another exciting moment was when the Cal Team won the NCAA in 2011, when they broke the 31 years drought.

Another indelible memory was when Nathan was still in high school, we woke up at 4AM on a Saturday morning as he thought he had practice at 5AM. We made the 40 miles trip to Tacoma. When we got to the pool, it was still pitch dark and his coach was working with another swimmer and Nathan’s practice would not start until 6. The two of us slept in our car in the parking lot. Man! We could have slept in our own bed for an extra hour, on a Saturday?

8. Do you get nervous watching him/her swim?

YES! It never gets easier. I got nervous with my other children also. Donella swam for Arizona State in her freshman year, then University of Puget Sound; Justin swam 4 years for University of Washington. That’s the nature of the beast, you are with your children all the way, no matter what.

I am not a competitive swimmer and honestly I would not know what went right and what went wrong. If he is OK with the result I am cool with it no matter what. I am there to support him, share his joy and sorrow.

Let your child be the best of what he/ she is. Leave the teaching/coaching for the coach. Share the ups and downs with your child on the emotional level. Swimming is only a phase in their life, it will come to an end eventually; use this as a learning tool in life. Also at some point, the swimmer, the coach and the parents have to sit down and decide what level swimming the child wants to achieve, a recreational swimming, competitive swimming, what level your child is aiming……..how much the child is willing to work? Is this the right team?

How can I get in touch with Cecilia Adrian?

I literally LOLed at the story where Nathan got the time wrong! Sorry Mrs. Adrian! I did that to my dad a couple times in the dead of winter, and I can still remember to this day the dirty looks he gave me, although I made up for it once by getting it wrong an hour late -tho then had to endure Coach’s looks. One of those countless thankless things that swim parents endure.

But I didn’t realize his older sibs swam all the way thru Pac-12 so by the time Nathan came up she was already a “pro” at being swim mom. There’s probably some further interesting stories in there– why did he change teams in 7th… Read more »

She works at my son’s school, and as we were leaving for short course champs I heard her voice echoing down the Hal, “Go, Zane!” What a great supporter of our local swimmers, even now!

Thanks for sharing the interview. What a wonderful family.

Love this series, Anne!! Not even gonna lie, I filled up a couple of times… I agree with Danrobjon, can we have a dad series on Fridays? Or alternate? Good stuff!!