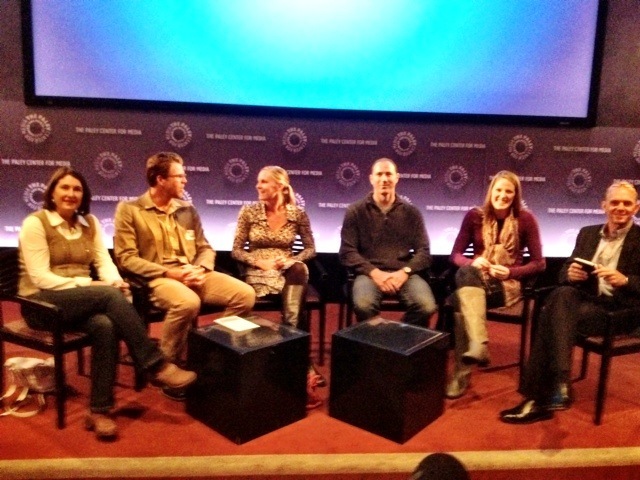 Brendan Hansen (middle) at the Swimming through the Decades panel before Golden Goggles in New York City.

Mary T. Meagher, perhaps the greatest age group swimmer in the history of the sport, preparing for a panel on how the sport has changed.

Olympic superhero Missy Franklin poses with fans at the Swimming Through the Decades panel in the leadup to the Golden Goggles Awards.

Olympian Breeja Larson and her coach Steve Bultman of Texas A&M, also on the Olympic Coaching Staff at the swimming through the decades panel, looking pleased after a weekend of spectacular swimming in Houston. Bultman has been on Olympic staffs in two very different decades: the 1980’s, and the 2010’s.

Gary Hall Jr. (right) has found a new partner for the weekend, as apparently Dave didn’t get an invite. See here with American relay anchor extraordinnaire Jason Lezak at the Swimming through the Decades panel.

12-time Olympic medalist Jenny Thompson (middle) at the Swimming Through the Decades panel.

This is THE MAN, Rowdy Gaines, getting ready to lead the conversation on Swimming through the Decades. Brett Hawke says that Rowdy’s Auburn School Record in the 200 free is going down this year. Many have tried, many have failed.

What a bunch of great Us Olympians ! fantastic to see them together …….