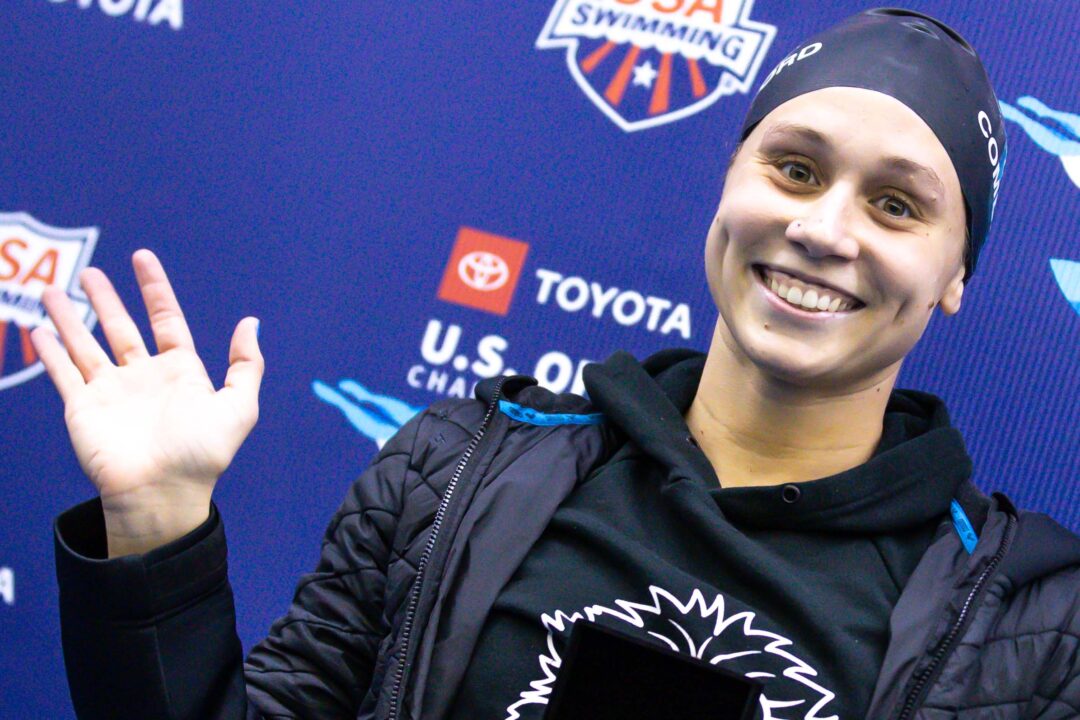 Comerford and Burckle have been dating for the last three years and officially got engaged on Sunday. Archive photo via Jack Spitser/Spitser Photography

Another swimming super couple is on their way to the altar.

Comerford and Burckle have been dating since 2019, and have both experienced tremendous success on both the international and collegiate stage in swimming.

A native of Lousiville, Ky., Burckle was also the 2010 NCAA champion in the 200 breast, competing for the University of Arizona as a senior after starting his collegiate career at Florida.

Following his illustrious career in the pool, Burckle completed his MBA at Stanford in 2015 and has gone on to find success in the business world, currently managing a swim, tennis and fitness club in the Louisville area.

Comerford, 24, broke through on the global swimming scene in 2017, winning five relay gold medals at that year’s World Championships in Budapest.

She also tied with Katie Ledecky for the 2017 NCAA title in the women’s 200 free, and went on to repeat in the event in 2018 and 2019. As a senior in 2019, Comerford added a victory in the 100 free to give her four individual national titles during her career at Louisville.

Earlier this year, Comerford bounced back from missing the 2020 Olympic team to place sixth in the women’s 100 free at the 2022 International Team Trials in Greensboro, earning a berth on the U.S. World Championship team where she went on to win silver as a prelim member of the women’s 400 free relay.

The announcement is just the latest among prominent swimmers getting engaged, with Simone Manuel and Carson Foster also having done so over the last month.

Congratulation to the lovely couple!

My boy Clark threw down some serious heat in that 2 Breastroke at NC’s. At the same time Mal was winning 10 and Under Champs!!

Congrats to both! Hopefully there is a suit that will hold Clark’s thighs.

Oh man. There’s a coach in the desert who must be heartbroken.

Do you think that’s a problem? Or do you just find it an interesting fact?

Not necessarily a problem, but a 31 year old going after a 21 year old college student definitely feels a little odd.

Not if you knew Clark haha

I don’t know if in the history of competitive swimming was the story like Mallory Comerford’s one. In a few seasons completely unexpectedly raising from practically no one to the very elite and then same suddenly going back. Always was rooting for her.
Congratulations and wish her the best.

She’s a short course specialist whose peak equated to overachieving for a few years at long course 100 meters. Full credit to that.

It will be interesting if in 20 years I am like. Huh, I remember that last name.