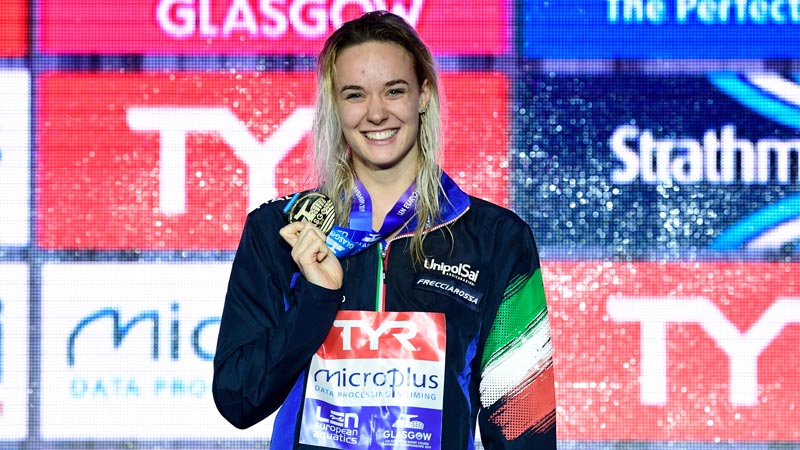 Roach reminisced on some of his favorite memories on building the national junior team, which he was the director of from 2008-2013

A swimmer’s schedule is usually marked by tight and labored beats. Hours and hours between swimming pools and gyms, entire days ruled by the rhythm of our strokes and our goals.

Swim Swam Italy has stolen a bit of this time from some of the best Italian swimmers.

To talk about quarantine, TV series, bad diets and lots of swimming.

In the first episode, SwimSwam Italia connects with Filippo Megli.

Filippo Megli, the Italian record holder in the 200 free, tells Swim Swam how he is spending his quarantine in Florence. Filippo explains that he can’t swim so he trains as he can at home, using workout circuits. Besides obviously staying away from the water, the most difficult part, he admits, is not to gain weight.

“The season can now be considered over. We’ll have to reschedule everything. It’s important to set the dates for the next competitions in order to plan the training schedule. Swimmers need planning and perseverance. So after this time of emergency it will be necessary to rebuild a schedule.”

Filippo is not yet qualified for the team that will compete at the XXXII Olympic Games but he holds the best Italian performance in 200 freestyle. He was also part of the fourth place 4×200 free relay, in Gwanjiu. Filippo remembers his last strokes of that race:

“We had the best time during the preliminary. Lane 4. But we were almost all young. Maybe someone from above gave us a hand, I don’t know, but the race was extraordinary. Many people told me that it was a beautiful race. I suffered. The arrival has been devastating. With the last stroke I believed we made it (being third). We were all so close.”

Italy finished 4th, only 3 one-hundredths behind the United States, but also only .03 ahead of Great Britain in 5th.

“An extra year before Tokyo can help us become stronger, in one or two years we can grow even more.”

The second guest of Swim Swam Italia swimming from home is Margherita Panziera.

Margherita is the European Champion in the 200 backstroke, both in short and long course.

During the Talk Show, Margherita says that currently she can still train, thanks to the safety measures for the athletes’ health taken by her team. Margherita, indeed, lives in Rome, at Aquaniene guesthouse. Instead, her family lives in northern Italy, far from her.

“The village where I used to live as a child is small. 5 years ago I moved to Rome to live as a professional swimmer. It wasn’t an easy choice. I have to thank my family. Now I’m happy”

Margherita is one of the 4 Italian athletes who qualified for the Olympic Games during the National Championships in December. On the postponement of the Olympics she says:

“It’s the right decision. Competing in July would have been wrong. For the wellness of people involved and also because many athletes are not training right now, and this is against the Olympic spirit and fair play.”

The Italian backstroker has improved a lot in the last 2 years, she got to the European elite and stopped just one step away from the podium at the World Championship.

“The turning point of my career was at the Settecolli Trophy in Rome. I cried for happiness for the first time because that National Record belonged to one of my idols, Alessia Filippi”

Then she takes a look at the new Olympic dream:

“I’m now a more aware athlete. I hope to win next year the medal I missed in Gwanjiu”