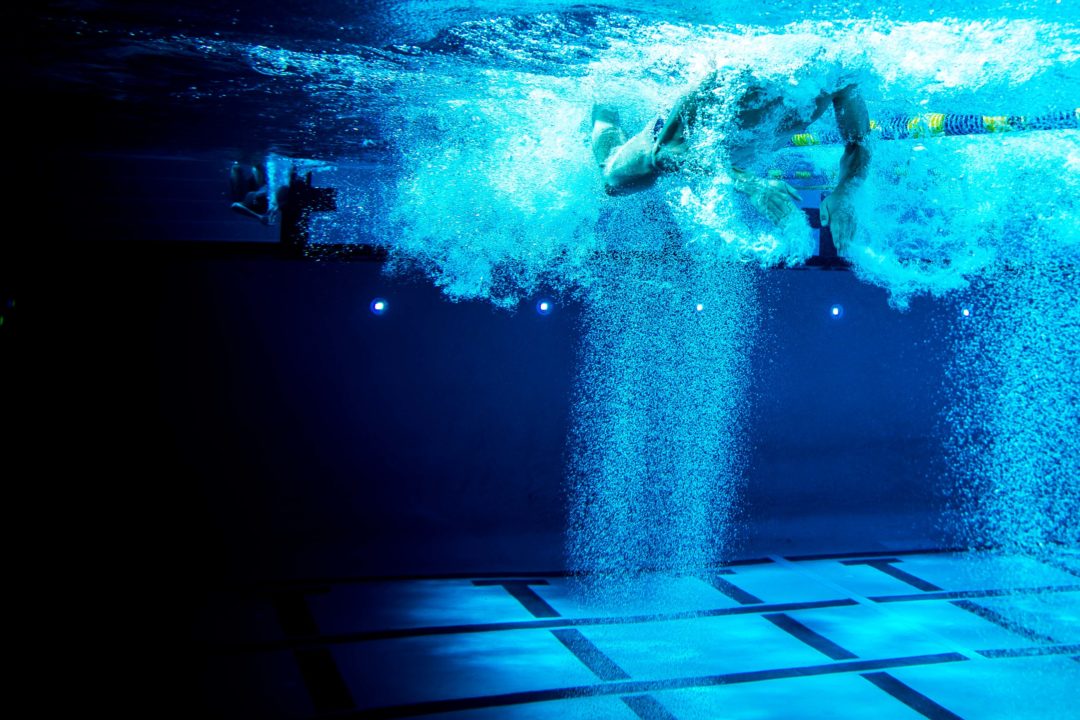 An analysis of team rules from 236 different college sports programs, finding that swimming was among the most likely to include specific anti-hazing rules. Stock photo via Jack Spitser/Spitser Photography

College sports media outlet The Intercollegiate analyzed team rules documents from 236 different college sports programs, finding that swimming was among the most likely to include specific anti-hazing rules.

“The scope of these rules shows how much control schools have over their athletes, which supports an argument that they are in fact employees of the institution,” argues one source in that story, a former NCAA official who now runs a law firm that represents student-athletes.

The Intercollegiate references team rules that govern everything from marriage (UConn football players are required to inform their coach if they plan to get married while in college) to legal-aged drinking to bodily hygiene. Here are a few of the more swimming-specific takeaways from that report:

The report focuses on student-athlete requirements, which is a major argument in the push to allow college athletes to earn money for their athletic skills, whether directly from schools or from outside sources. That will have its own impact on swimming & diving at the college level. But The Intercollegiate story also has another tangential connection to swimming, in the data about anti-hazing rules.

For swimming, the specific hazing rules may be a form of program self-preservation, as hazing allegations have preceded – or even led directly to – program cuts in several notable instances.

Most noteworthy: Western Kentucky suspended its swimming program for five years after a Title IX investigation into hazing allegations. That suspension would technically be over this fall, but the school eliminated all funding for swimming & diving and does not appear to be bringing the program back.

East Carolina and Dartmouth were both cut this offseason. And while both schools justified the cuts with solely budgetary reasons, both programs also faced 2017 hazing allegations that brought some level of bad press to their schools. Dartmouth canceled its fall meets and winter training trip, while ECU was cleared as a team, with individual athletes still subject to punishment for their conduct.

It shocks me that teams are still doing ritual hazing. Have they not seen the effects it has on entire programs? Some of the cases are scarring to the freshman but also to get your entire team suspended or cut for some dumb tradition is just stupid. When I was a freshman we played some silly drinking game with the upperclassmen but it was totally optional and in no way to try to make us feel inferior to them and was more of a team building thing. Grow up kids

As a current college swimmer I find that a lot of ‘news’ surrounding hazing tends to involve swim teams. Hazing ain’t right but it seems a lot of the time Athletic departments either don’t know about or choose to ignore hazing in more ‘respected’ sports than swimming, giving it a bad name by comparison (I could never see a power football school suspending its team for hazing during a lucrative season, for example).

Is it fair that we as a sport are held to higher standards? Nah, not really. But I, for one, would embrace the classy swimmer mentality much quicker than bemoaning that we aren’t able to get away with crap football teams pull.

Agreed … but it isn’t about the higher standards: it’s an implicit bias that (among other things) ruins teams’ reputations for no reason and makes the decision to cut the swim team that much easier. Hazing isn’t the way to go, but using an entire sport as a scapegoat shouldn’t be the price to pay.

Glad to read about this heightened and much needed flash about hazing. A mob mentality can permeate a team to “uphold traditions” which are often cruel and destructive. Certainly coaches in all sports are thankful for any force or movement against hazing. Kudos out to “The Intercollegiate” and like minded organizations and individuals! Enough is enough.

Can we send this article to every AD in the country? The more positive college swimming press, the better.

Lesson to all current and future college swimmers: they won’t cut your team for hazing. But when they have to make hard decisions about what teams they need to cut for budget reasons, recent hazing trouble will make their decision much easier.

I was a member of a freshman class that was hazed and the team was disciplined appropriately. A year later, budget cuts come down and the administration needs to cut some teams, and it was a no brainer that swimming was the first one to go.

I’d take it one step further — your school WILL cut your swim team for hazing (see WKU) and will do so even faster in the current economic climate. Don’t do it.