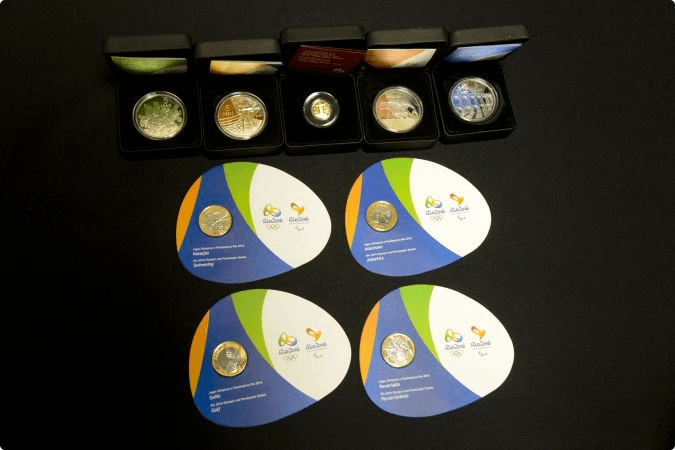 The Brazilian Central Bank has launched its first group of commemorative coins for the 2016 Olympic and Paralympic Games, and swimming is one of four sports featured. Current photo via Rio 2016/Alex Ferro

The Brazilian Central Bank has launched its first group of commemorative coins for the 2016 Olympic and Paralympic Games, and swimming is one of four sports featured.

Nine new coins have been launched, the first batch of 36 total commemorative coins to be minted between now and the Olympic Games in less than two years. The group of nine features one gold coin, four silvers and four regular coins to be put into regular circulation.

The gold coin features the iconic Christ the Redeemer statue, while the four silver coins feature other notable landmarks in Rio de Janeiro.

The other four are regular Brazilian currency, known as “real.” They feature four sports with special meaning to the games. Swimming and athletics are included, as they are the sports in which Brazil has won the most Olympic medals overall. Also included are two new additions to the Olympic lineup: golf, which will be included in 2016 for the first time in over 100 years, and pentathlon, which makes its first Olympic appearance in Rio.