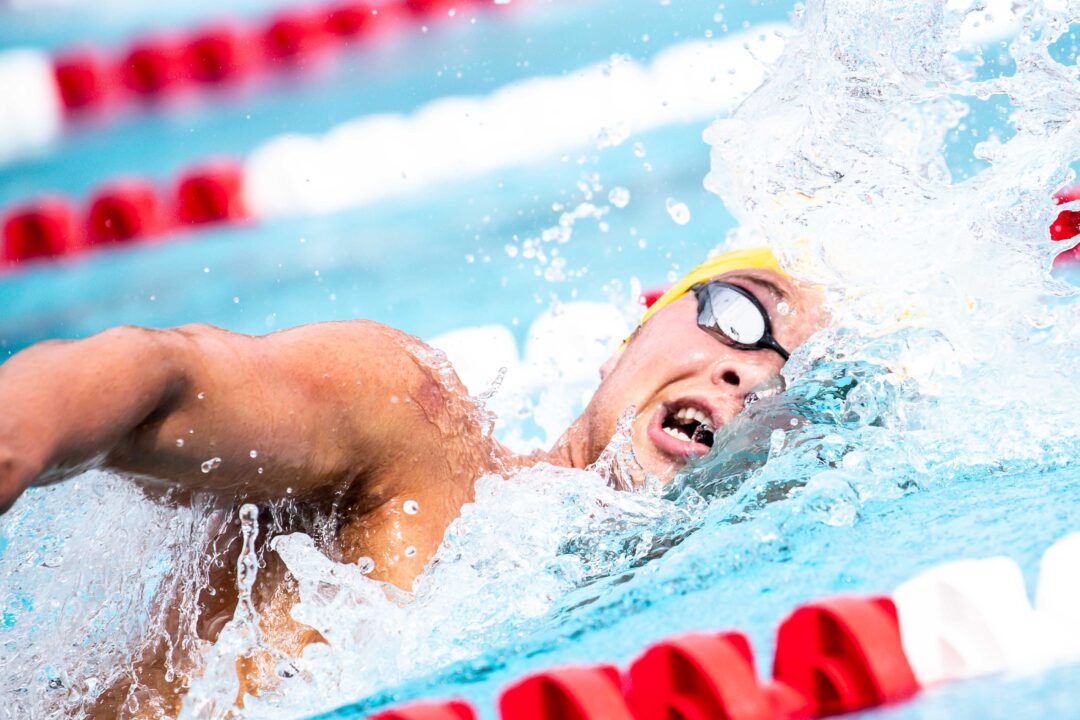 Gallant's time appears as though it might be the fastest we've ever seen in the 1650 freestyle prior to the beginning of November. Archive photo via Jack Spitser/Spitser Photography

NC State took on Auburn and Kentucky in a two-day tri-meet last weekend, dominating the opening day of competition before the teams raced an unscored exhibition session on Saturday.

Amongst the Saturday swims was a standout performance from sophomore Will Gallant, who registered a swift 14:53.91 in the 1650 freestyle to mark the first man under 15 minutes in the NCAA this season.

Gallant, who spent his freshman year competing at Indiana in 2019-20 before transferring to NC State (and sitting out of collegiate competition last year), won the race by more than 50 seconds and was less than five off of his best time set at the 2019 Tennessee Invitational (14:49.00).

Gallant currently ranks first in the NCAA by more than 22 seconds.

Since the 1650 is rarely contested during dual meets, Gallant’s time may be the fastest pre-November swim we’ve ever seen in college swimming. Dating back to 2000, the previous fastest on record prior to November came in 2019, when Notre Dame’s Jack Hoagland clocked 14:56.54.

Gallant was fifth in the 1650 at the 2020 Big Ten Championships as a freshman at Indiana, and has yet to race at an NCAA Championship meet due to the 2020 cancellation and him sitting out of college swimming last year.

His time from the weekend would’ve narrowly missed scoring at the 2021 NCAAs (17th), which projects him to be in good shape to be a big-time contributor for the Wolfpack at his first national championship in March.

Between Gallant, Plage and 2021 NCAA third-place finisher in the 1650 Ross Dant, NC State has a lethal trio in the distance freestyle events that figure to do some serious damage at the end of this season.

You can find full results of NC State’s exhibition meet on Saturday with Auburn and Kentucky here.