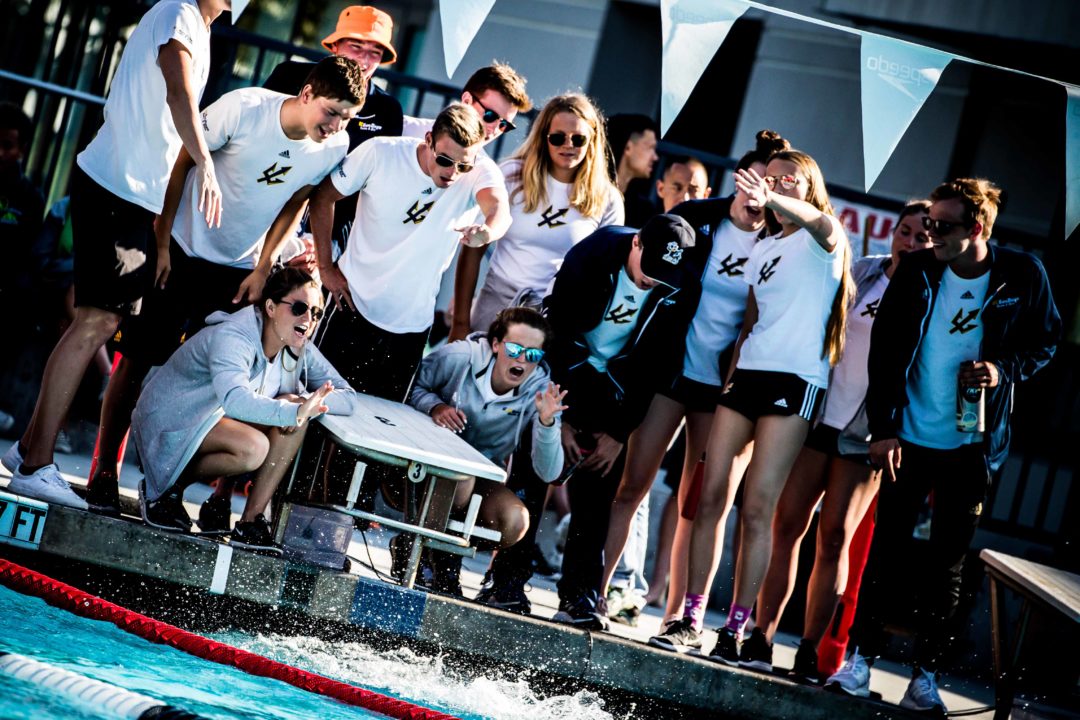 "This journey created memories that will last for a lifetime, and it produced special moments for the parents that left me breathless." Stock photo via Jack Spitser/Spitser Photography

Ask Swim Mom: When Will My Child Move Up?

Although some kids possibly are overlooked for moving up through the ranks, usually there is a reason why coaches keep kids in certain groups.

Swim Mom: Will City Pools Be a Casualty of Coronavirus?

Not only are USA Swimming teams at risk throughout the country, but pools may go under as well. Many people’s lives are improved daily because of a pool.

If we take anything away from these uncertain days, maybe it’s not to sweat the small stuff and appreciate what we have.

With “shelter in place” going on for more than 30 days, I really miss swimming. Here are 11 things I miss about the sport more than I expected.

Swim Mom: 7 Tips for Great Conversations With Our Kids

With many families spending more time together, we’re presented with a perfect opportunity to work on communicating effectively.

The sights and sounds of conference champs probably seem like a long ago memory to most college swimmers. After all, athletes who rarely take days off have now been forced to the sidelines for months with pool and gym closings. Everyone awaits the chance to dive in again and feel the serenity of the water surrounding their bodies.  This temporary break for my swimmer came after her most enjoyable and best overall season ever – 17 years in the pool!

She got to be part of a brand-new Division 3 swimming program that has strengthened her love for a sport she has literally been a part of since she was 4. As we await the start of a new day in swimming, it seemed like the ideal time to pay tribute to blessed beginnings. The birth of new college swim teams is joyous and should be celebrated. When you ask her how she feels about helping coaches and teammates start a new program, her answer is always the same –  Blessed. Being part of a new program is personally meaningful, but also an awesome opportunity that comes with responsibility. There is only one chance to start establishing the program norms. There is one chance to start building a culture of trust, sportsmanship, hard work, and fun. There is one first season to celebrate the magical memories, and to set the tone for the many seasons to come. My daughter is right. She was Blesssed!

From a performance standpoint, the swimmers did not disappoint, placing in the top four in the very competitive and large ODAC conference. Both men and women accomplished this with a team consisting of mostly freshman and a few upperclassman transfers and dual-sport athletes. But this was not even what made this experience spectacular – the winning tradition. This required the ability of a coaching staff who knew how to motivate and train athletes of differing talents and how to tap into the strengths of each. It required a coaching team that understood how to make the journey fun, and how to bring out the best in each of the athletes.

The enlightened parents appreciated the positive culture created for the athletes that resulted in a true team and a new swim family. Athletes supported their teammates, and the visibility of that support was evident by team interaction on the pool deck. There were high fives, hugs, and smiles as the team cheered to help enhance the performance of their swim team family. The swimmers will remember these moments long after they hang up their goggles, even more so than the records set, conference awards, or races won or lost.

This journey created memories that will last for a lifetime, and it produced special moments for the parents that left me breathless. There were teammates racing and winning or losing to each other, but never failing to offer a supportive hug to those they train with every day. They extended the accepted courtesy to competitors whose caps contained a different logo. They celebrated the exuberant joy of a swimmer accomplishing a best time or some other goal for the first time. I, as what seems like a forever swim mom, found joy in the quiet moments in a crowded stadium and on a busy deck between coaches and athletes.

When you are lucky enough to observe a new team culture that enriched the lives of the coaches and the athletes, you realize what swimming is really all about – life enrichment. A positive bond is being created that will benefit the current team, as well as those that compete in the years ahead.

Although my swimmer did not swim her lifetime best in her signature event, she had some terrific races and even turned in her fastest times ever in sprinting races – though she is a distance girl. There are many other things that made a first time, brand-new team a blessings. There was the winter team training trip to Florida, and the barbecues, brunches and the friendships forged between athletes who were mostly strangers a year ago. There were costume -themed workouts and some pretty awesome dancing by some of the swimmers. One of the most impressive observation was watching the lessons taught by amazing coaches who were once swimmers giving back to the sport they love. They never missed a teachable moment, and they were still teaching right before and during the conference final.

Being part of a new beginning is special in ways that cannot be fully described – only cherished. As parents you get to be reminded one more time that swimming is family. It is heart, passion, determination and the fulfilling of dreams.

There is not one single thing that matters more than the culture your swimmer is part of. Nothing. What is unique to D3 is swimmers are there because they love the sport of swimming. There are no scholarships. There is passion. It is visible as you watch athletes race to the wall, glance at the clocks, and celebrate with each other. And if you are part of a brand new team, you are forever tied to its beginnings. And unlike in a lot of larger programs, swimmers sometimes have the chance to swim in races other than in their signature events. This adds variety to the program, and it sometimes creates surprises as to how well they can perform out of their comfort zone. The team mentality led the swimmers to eagerly do their best in whatever event they were needed, even if they believed they were more talented in other events. In the most awesome cultures, swimmers come to realize they are contributing to their team, and they are not just trying to achieve a personal best for themselves. The team matters, and that is a wonderful life lesson that can be taken with them and applied as they enter their future careers. No one can navigate this world alone, and as they say, “it takes a village”, or you could say it “takes a team.” So here is a shoutout to Blessed Beginnings. A shoutout to amazing coaches and great young men and women. And to the realization that nothing ever beats being there for the firsts.

Donna Hale has been a swim mom for 17 years. Her daughter swims for The University of Lynchburg Hornets who launched a new team after decades on hiatus.