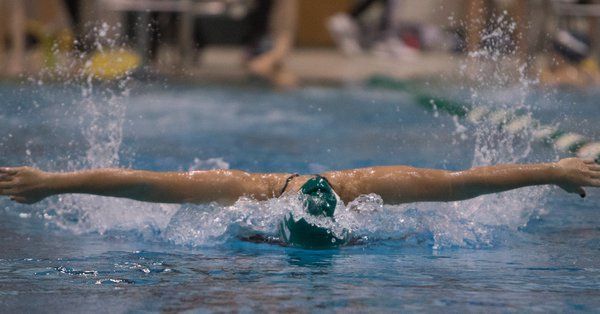 ROCHESTER, Mich. – The Eastern Michigan University swimming and diving team captured its fourth dual meet win of the season at Oakland University, 190-110, Nov. 10. EMU moves to 4-0 this season, marking just the seventh time in school history the Eagles have started a season without a dual loss through four meets.

Eastern was led by multiple-event victories by seniors Nicole Swartz (Dayton, Ohio-Centerville) and Delaney Duncan (Galesburg, Ill.-Galesbrg), and junior Casey Gavigan (East Setauket, N.Y.-Ward Melville). Gavigan once again swept the Backstroke events, earning her season best times in the 100 and 200 with finishes of 55.12 and 2:00.2, respectively. Swartz recorded the most event titles of the day, touching in first for the 200, 500 and 1000 Freestyle events. The Dayton, Ohio native finished the 200 Free in just 1:54.12, her fastest finish of 2018 and more than a second ahead of her competitors.  She also earned her season-best finish in the 500 Free, touching in more than seven seconds before any other swimmer, with a time of 4:57.40. Her 1000 Free finish also bested the field of competition by more than three seconds, coming in at 10:31.61.  Duncan earned her event titles besting the 100 and 200 Breaststroke field, earning the top times of 1:01.92 and 2:17.21, respectively.

On the springboard, junior Sophia Tsafantakis (Washington, Mich.-Romeo) earned the lone diving title for the Eagles, earning her season-best score of 277.57 on the 1-meter.

The Eagles take a two-week hiatus before they get back in the water at the Denison Invitational, Nov. 29- Dec. 1. The event features two sessions daily, beginning at 10 a.m. and 6 p.m.

ROCHESTER, Mich. – Freshman Mady Cislo recorded two first place finishes in the Golden Grizzlies dual meet against Eastern Michigan this afternoon in the Oakland Aquatic Center. She won both the 200-yard IM with a time of 2:07.88 and the 200-yard butterfly with a mark of 2:05.73. Fellow freshman Susan LaGrand recorded a first place finish of her own in the 100-yard butterfly by a mark of 57.16.

Oakland fell to Eastern Michigan by a score of 190-110. The Golden Grizzlies will continue competition Nov. 30 – Dec. 2 at the Zippy Invitational in Akron, Ohio.