Superman In A Speedo 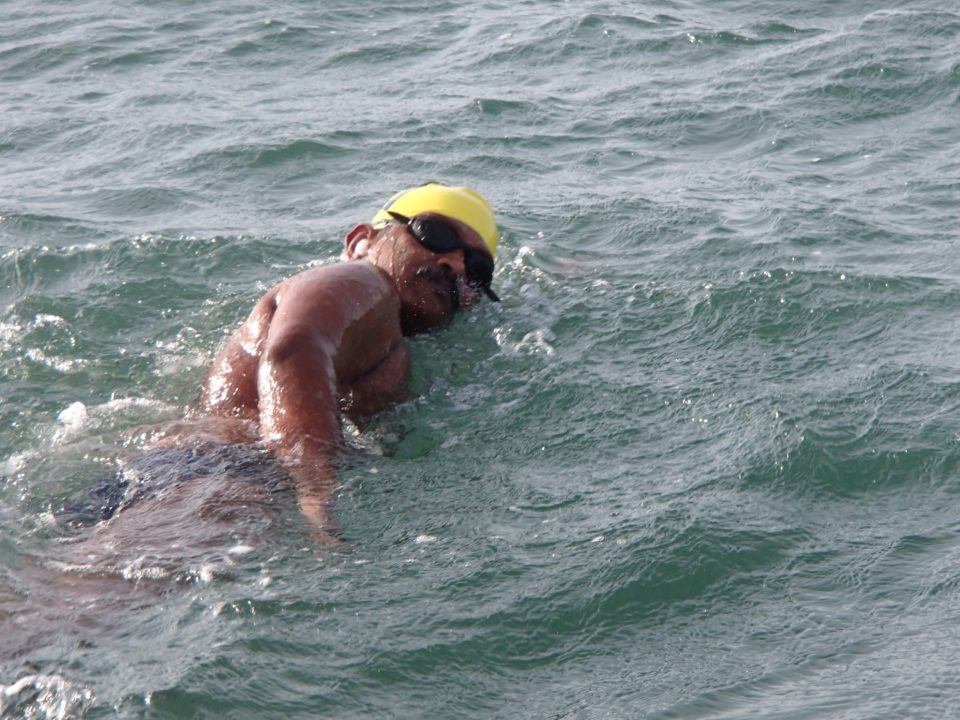 Later this month (November 2017) Madhu Nagaraja of Oakville, Ontario will attempt a Canadian first as he travels to a remote location in Chile and endeavours to be the 23rd person to swim across the Strait of Magellan. Current photo via Janice Barker

Later this month (November 2017) Madhu Nagaraja of Oakville, Ontario will attempt a Canadian first as he travels to a remote location in Chile and endeavours to be the 23rd person to swim across the Strait of Magellan. Even for ships, this passage between the Pacific and Atlantic Oceans is difficult because of the unpredictable winds and currents. Add the frigid water temperature and waves and this swim becomes too dangerous for everyone but the most prepared and most skilled swimmers. Madhu made his first attempt at the Strait in 2015 but after enduring almost two hours fighting the frigid, turbulent tide, he was evacuated in a state of life threatening hypothermia. Despite the incomplete crossing, he describes that day as a “Successful Failure!”

According to Canadian long distance swimming icon Marilyn Bell, “My friend Madhu Nagaraja has already proven that he is an extraordinary athlete. He has swum the English Channel, conquered Lake Ontario and completed the Marathon des Sables, a six day Ultra Marathon Foot Race in the Sahara Desert. He has continued to train with diligence and a passion that comes from deep in his marathoner’s heart. His courage and fortitude allow him to take what would be a negative, scary experience for most and use it to prepare for a return visit to the Strait and another opportunity to pursue his dream.” Marilyn goes on to say “I am in awe of my extraordinarily humble friend who continues to inspire others to set goals and pursue their dreams while continuing to challenge what only 22 persons have accomplished.”

For many Canadians, cold water swimming is trending and small cold water groups are popping up all over Ontario. What drives some people to swim – not dip, or run crazily in and out, but to actually swim significant distances – in utterly frigid waters, with nothing more than swim trunks and goggles? Loren King, friend of Madhu and fellow Lake Ontario crosser says that “Even with a wetsuit, water below 10 degrees Celsius is obscenely cold. The pain upon entry is difficult to describe: hard, unrelenting; a sharp, constant ache, until numbness sets in. Breathing is difficult, muscles far less efficient, so your stroke is laboured and feels weak, feeble. Your forehead burns against the cold.” He says that when Madhu returns to the Straits later this month, he will confront waters ranging from, at best, 10 degrees Celsius, but in parts of the channel: much, much colder, at times approaching zero. He will face unpredictable currents and variable wind conditions in one of the most inhospitable marine passages in the world. And he’ll do all of this in nothing more than swim trunks, cap, goggles, and a divine sort of madness that drives us to attempt things that seem patently, absurdly impossible. Even though King will not be with him in Chile, he is confident that this time Madhu will join a select rank of fellow swimmers who have swum, unassisted, across one of the most challenging open water swims on the planet.

Madhu is very well-known in the open water community which in addition to Marilyn Bell includes many Canadian swimming legends. Retired Canadian marathon swimmer Vicki Keith says that “Madhu has a true passion for the sport of open water swimming. It takes dedication, determination and a touch of craziness to undertake any ultra endurance sport. Madhu has demonstrated all 3 of these in his years as an open water swimmer”. She says that “he has a unique energy, and a desire to prove to others what is possible.”

Madhu and his friends meet regularly at Coronation Park to swim, whatever the weather. Amy Ross, a swim pal of Madhu says “we do it because we love it and we love the people that come with it. All of us might be a bit crazy but it sure does make for good times and motivation.” Her recent Facebook post sums it up: “in a few weeks, one of our ‘crazies’ is heading to the tip of South America, where the oceans collide in the Strait of Magellan to don his Speedo, jump in those crazy waters, and be the 1st Canadian to swim across that Strait”.

Madhu says that “Training for an expedition like this is impossible without support. What I have learned is that these kinds of challenges bring with them a unique group of people who are not only great human beings, but have the art of excelling under stress. They have the ability to be selfless, to keep the training safe and achieve the goals. Hanging out with this group of people, enjoying a cup of coffee at our favorite cafe (Bean There in Downtown Oakville) and planning a flawless execution is a thrill for me. And, when it’s all done – it’s really not about swimming.” He has a profound love and respect for the water and when he is not working, swimming or with his family, he devotes many hours working with both Great Lakes Open Water Adventures (GLOW) and Great Lakes Trust, A fund supporting scientific research, artistic expression, and civic engagement for the Great Lakes. If you would like to support Madhu on his journey, a fundraising page has been set up. Please visit gofundme.com/madhuswims.

Wonderful to hear that Madhu has swum the Straits of Magellan yesterday! Phenomenal!