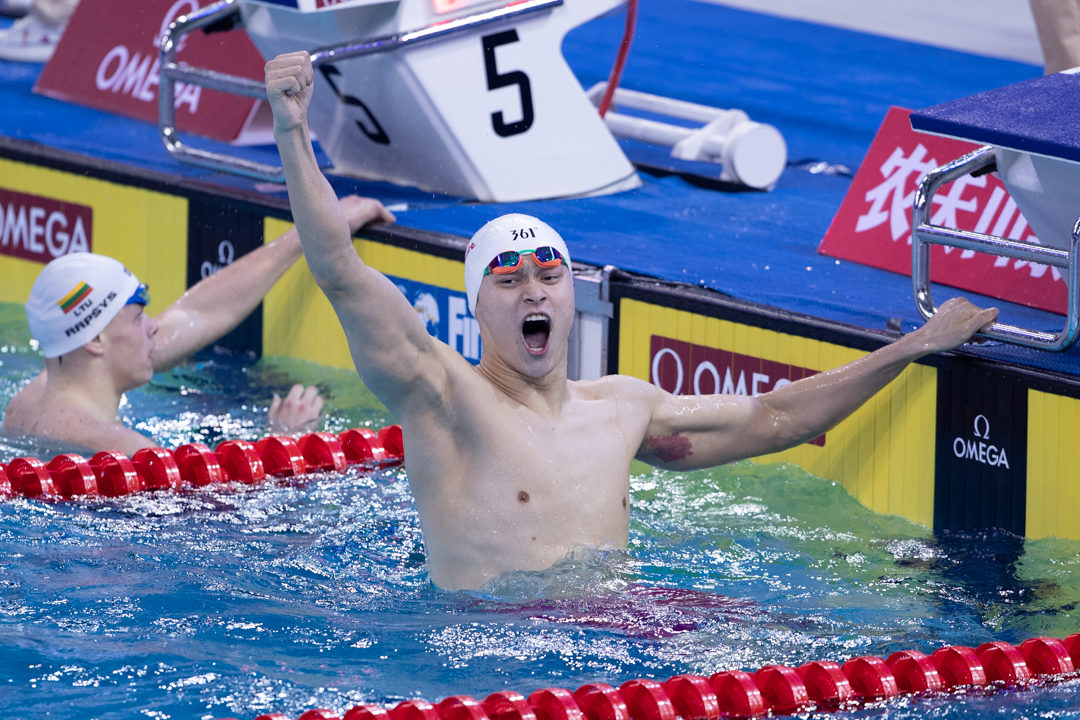 Chinese Olympic gold medalist Sun Yang will not be in Tokyo to defend his 200m free title despite his ban having been reduced from eight to four years. Current photo via “Rafael/Domeyko Photography”

Chinese superstar and reigning 200m free Olympic gold medalist Sun Yang will officially not be competing at the 2020 Olympic Games in Tokyo, Japan. He has been handed a new ban that will last for 4 years and 3 months and run through May of 2024 – prior to the Paris 2024 Games.

Sun Yang‘s new ban is backdated to February 2020, which means he could compete in Paris 2024 at the age of 32. He also can potentially appeal this latest decision to the Swiss Tribunal again. However, as it was conducted behind closed doors it would be difficult to assess the grounds upon which such an appeal would be made.

CAS‘ decision included the following in terms of specific violations by Sun Yang:

The new Panel found to its comfortable satisfaction that Sun Yang committed the following ADRVs (anti-doping rule violation) when an unsuccessful attempt was made to collect blood and urine samples from him at his residence on 4-5 September 2018:
• Article 2.3 of the 2021 FINA Doping Code (2021 FINA DC) (“Evading, Refusing or Failing to Submit to Sample Collection by an Athlete”).
• Article 2.5 of the 2021 FINA DC (“Tampering or Alleged Tampering with any Part of Doping Control by an Athlete or Other Person”).

You can read the entire CAS decision here

In February 2020, the 29-year-old freestyle ace had been handed an eight-year ban by the Court of Arbitration for Sport (CAS) for having broken anti-doping protocol. The ruling was made following an out-of-competition doping control test at which Sun destroyed samples, arguing that those who were testing him were improperly certified.

However, Sun appealed to the Swiss Tribunal, which ultimately overturned this previous suspension handed down by a different panel of arbitrators. The Swiss Federal Court confirmed at the time that racist comments made towards China by the chairman of the three-member panel responsible for the original ban were the source of the overturning.

FINA has also issued a statement upon hearing the CAS decision as follows:

Duncan Scott must be laughing his ass off

This is terrible news. As hard as it is for some of you to accept, Sun Yang is so good for our sport.

So this means he doesn’t have to give back his 2019 medals?

To paraphrase:
“You’re a loser! We’re all winners “

Fun fact: It will be the first time since 2011 that the men’s 400 free champion at the major summer meet is not named Sun or Horton.

Hopefully the sun has finally set on this ugly saga.

how strong is his case at this point? this is like the 3rd appeal to win in this case.