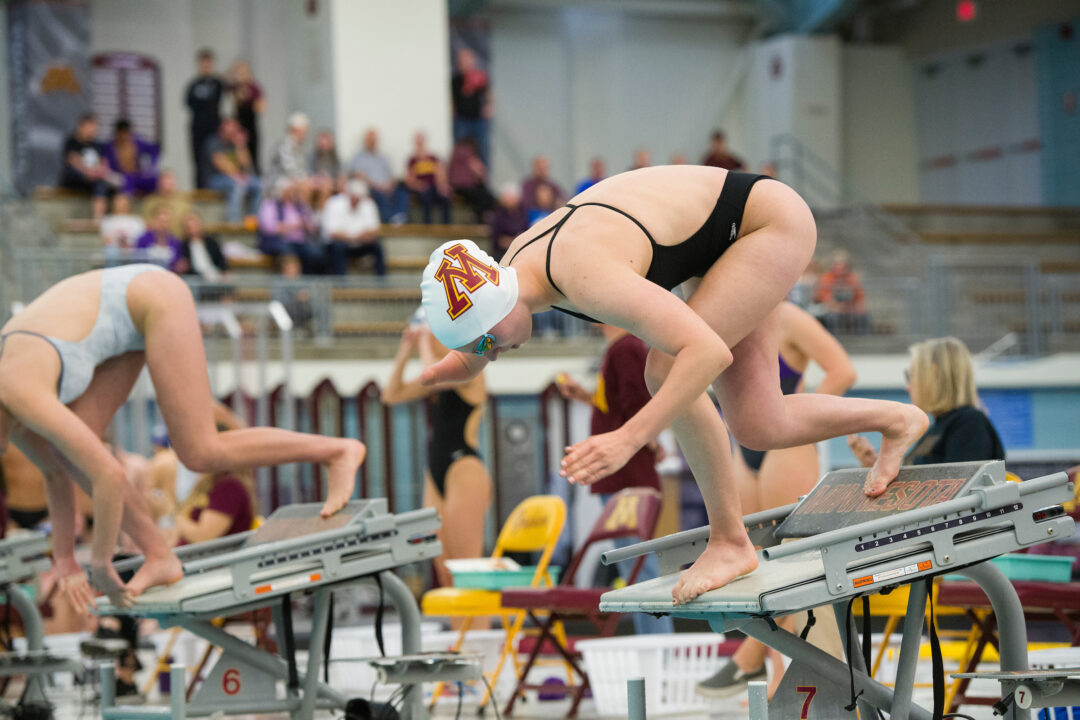 Swimming alone in the D-Final of the 200 fly on Saturday evening, Summer Schmit smacked her own para-swimming record in the 200 yard butterfly. Archive photo via Christopher Mitchell/Minnesota Athletics

After shaving less than two-tenths of a second off her own American Record in the S9 200 fly in prelims, Minnesota freshman Summer Schmit blew the door off in finals.

Swimming solo in the D-final on Saturday evening, Schmit cranked a 2:14.48. That knocked more than two full seconds off her 2:16.63 in prelims, and reset her own American Record in the para-classification for the event.

That time actually jumped a class and is faster than the S10 record, a rare (but not unheard of) ordering. Only one US classified para-swimmer, Becca Meyers, has been faster. She was 2:14.12 in 2015 when competing as an S13.

Schmit is a native of nearby Stillwater, Minnesota, where she trained with the St. Croix Swim Club. She stayed close to home for her college swimming.

She represented the United States at the Tokyo 2020 Summer Paralympics. While she didn’t win a medal there, last summer she took the World Championship bronze in the S9 400 free.

Schmit was born with a congenital disarticulation of her right wrist and has no right hand.

Summer is the daughter of my high school Spanish teacher.

She has had quite the career going to the world championships and Olympics!

I remember seeing her mom teach her stroke technique at the local pool 10 years ago and wow has she made such progress!!!