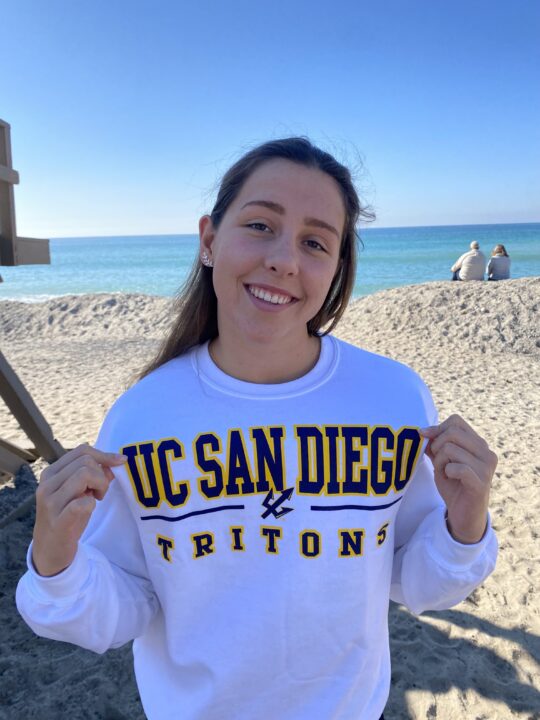 Asia Kozan of Diamond Bar, California has announced her commitment to swim at the University of California – San Diego (UCSD). Kozan is currently a junior at Santa Margarita High School, after transferring from Walnut High School.

“I’m thrilled to announce my verbal commitment to study and swim and the University of California, San Diego! A huge thank to my family friends and coaches! Go Tritons!!🔱”

Kozan previously swam year-round with the Mission Viejo Natadores, who’ve had a plethora of recent coaching changes. Mark Schubert, the former head coach, had abruptly left the team in October to take a role as the “High Performance Head Coach” at SET Swim. With Shubert’s tenure ending sooner than anticipated, the team promoted Logan Redondo and Jacinta Beckman as co-head coaches. The team also hired Michele Mitchell, a two-time Olympic medalist in diving, as the new executive director. Most recently, Jeff Julian, who was the head coach for the Rose Bowl Aquatics for nearly two decades, was hired to initiate a new Professional/Post-Grad group.

Asia and her older sister, Justina Kozan, made the move and are now training under Schubert at SET. The eldest Kozan (2022) is a member of the USA Swimming Junior National Team and is committed to swim at USC.

Her best times (SCY) include:

UCSD is a Division I Mid-Major program that competes out of the Mountain Pacific Sports Federation (MPSF) Conference. The UCSD Tritons are one of the newest additions to the NCAA Division I athletics after transitioning from Division II in 2020. USDC opted out of their 2020-2021 season due to COVID-19 concerns, but their last season was highlighted with a 4th-place finish at the 2020 MPSF Conference Championships.

The USCD women have had a strong start to their season, placing 4th at the USC Invite, 3rd at the Dixie State Invite, and are 2-0 in dual meets.

Based on their Top-10 marks, Kozan would be the fastest 400 IMer, 2nd-fastest 200 IMer/500 freestyler, and 3rd-fastest 100/200 flyer in school history. Kozan is currently the only committed athlete for UCSD’s incoming Class of 2027.