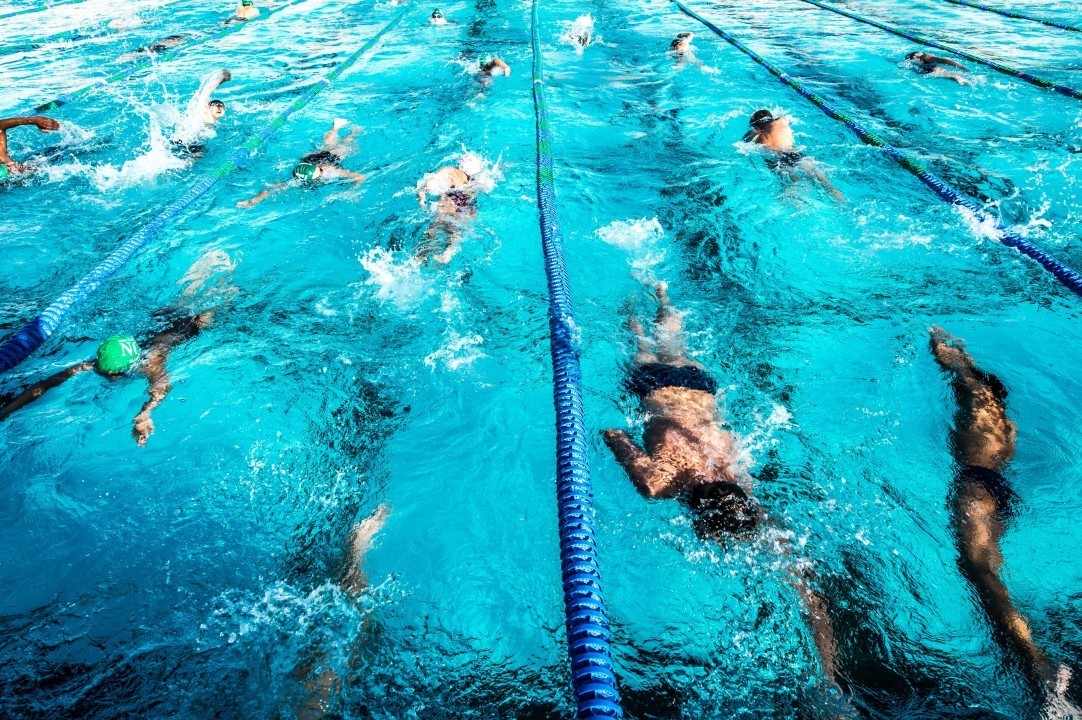 Teams from across the state traveled to the University of Illinois for their Dual Meet Spectacular, with the host team... Stock photo via Mike Lewis/Ola Vista Photography

Teams from across the state traveled to the University of Illinois for their Dual Meet Spectacular, with the host team Illinois taking 3 victories against Western Illinois (366-69), Olivet Nazarene (338-101) and Eastern Illinois (371-66). Illinois’ Samantha Stratford won 5 events, including the 100 IM where she set a new pool and school record at 57.90.

Neaveill broke the Illinois pool record and recorded a personal record by swimming the 50-fly in 23.18.

Neaveill later teamed with JD Furr, Samir Almhiemid and his brother Tyler Neaveill to touch second in the 400-medley relay in 3:36.50.

“We had a really good meet given the format of having to swim almost every event in one six-hour meet with a short break in the middle,” said head coachGreg Naumann. “The biggest challenge going into the meet was going to be able to keep the energy up, and swim fast for the back half of the meet. They needed a little extra motivation to help them get up for the second session, but they brought their A games.”

In the men’s 800-free relay, the team of Dylon Rykosky, Nick Bonneville, Hall and Matt Abercrombie registered a second-place finish in 7:05.78. Western received another second-place spot from Rykosky, Josh Hill and the Neaveill brothers with a time of 1:27.03 in the 200-free relay.

“Our divers are also starting to really see the benefits of their hard work,” Naumann said. “Melanie, Viktor, Quetzal, and Nathalie (Castro) are all starting to get their basics polished up, and are starting to even pick up new dives. It’s very satisfying to see the divers get to the point where they can start doing more difficult dives in practice, but even better when they take those dives into their competition lists.”

The Western women put up a pair of fourth-place finishes. In the 400-medley relay, Erica Hagen, Sarah Rosenhauer, Amy Borgstede and Lizzie Hollopeterput together a 4:18.04 time. Amanda Schaefer‘s 5:23.09 time earned her fourth in the 500-free.

Hollopeter, Marissa Purdum, Hagen and Hannah Fisher posted a fifth-place finish in the 200-free relay with a time of 1:44.23.

“We still have a long way to go for where we want to be at the end of the year, but the team continues to give the coaches their best everyday,” said Naumann. “We pride ourselves on training very hard throughout the season, and finish it off with some insane time drops for conference. We’re going to continue to work hard everyday, and continue to get better.”

The Leathernecks’ next swim is against Valparaiso on November 6 in Macomb.

The EIU women saw some competitive results as well to begin the year. The group of Martee Grainger, Kelsey Ferguson, Paige Eavenson, and Kaylee Morris paced themselves to a third place finish in the 400 yard medley relay with a time of 4:12.22. Joanna Wakefield, Dani Dimatteo, Caitlin Danforth, and Morris followed that third place finish with another one of their own, this time in the 200 yard freestyle relay finishing at 1:41.92.

Morris earned herself a fourth place result in the 50 yard butterfly at 27.33, while her teammate Ferguson placed fifth in the 200 yard breaststroke at 2:33.65.

“I thought the team performed well from start to finish today,” head coach Sue Novitskystated. “We were able to set five pool records and two school records which is outstanding for being on the deck for over six hours. There was a lot of energy all the way through the meet which is what we wanted to see.”

In the first session of competition, the Illini won 11 of the 12 events, highlighted by three pool records and one school record. First to rewrite the record book was the relay combination of Gabbie Stecker, Amelia Schilling, Megan Vuong and Samantha Stratford with a time of 7:27.17 in the 800 freestyle relay. The previous record was 7:31.65 set by Michigan in 1985. Three events later, Lori Lynn set the pool and school record in the 50 fly with a mark of :24.68. Stratford also set a pool record in the 200 butterfly with a time of 2:01.96.

On the boards, Olivia Kassouni scored 288.25 in the three-meter diving event, securing a first place finish. In doing so, she qualified for the NCAA Zone Diving competition. In the one-meter diving event, Jessica Clifford led the Illinois unit with a reading of 237.32, good for second place.

The Illini continued their winning ways in session two by winning 10 of the 12 events. Stratford earned three of her five event victories in the second session, including a pool and school record time in the 100 IM (:57.99). With the Fighting Illini Dual Meet Spectacular marking the first time the event was held at the ARC Pool, the Illinois 4×100 relay team of Stratford, Lynn, Stecker and Gabriele Serniute now owns the pool record (3:59.97).

Next up for the Orange and Blue unit will be a trip to East Lansing to take on Michigan State on Friday, October 23rd at 3 p.m CT.