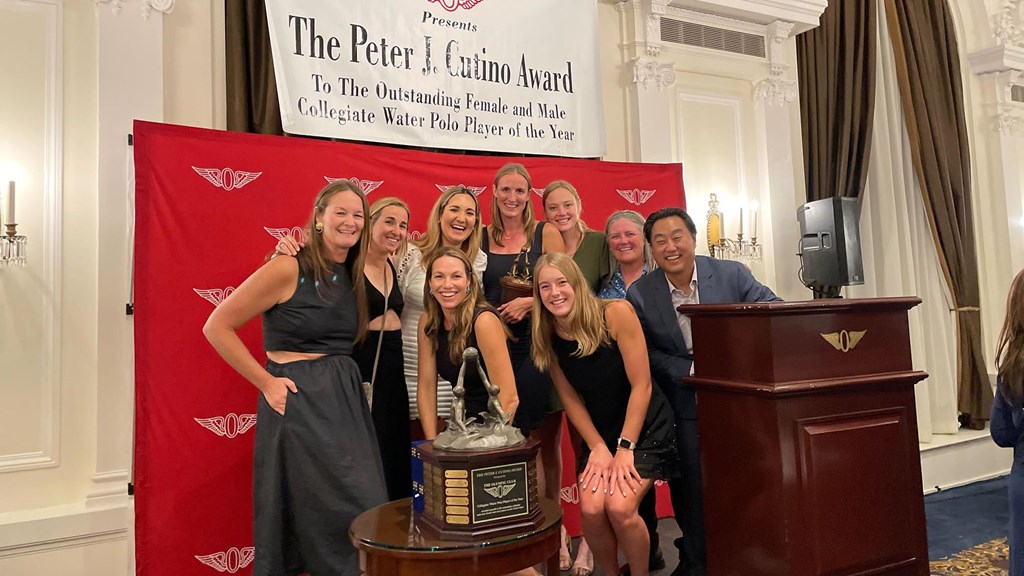 The award is presented to the most outstanding male and female collegiate water polo players in the nation as voted by Division I coaches. Current photo via Stanford Athletics

SAN FRANCISCO – Makenzie Fischer added yet another honor to her impressive final campaign, being named the 2022 Peter J. Cutino Award recipient on Saturday night at The Olympic Club of San Francisco.

Presented to the most outstanding female collegiate water polo player in the nation as voted by Division I coaches, Fischer is a three-time finalist and the third two-time honoree in school history, also winning the award in 2019 to join Kiley Neushul (2012, 2015) and Annika Dries (2011, 2014).

Returning to the pool for the first time since 2019 due to both Olympic training/competition and pandemic-shortened seasons, Fischer was named the ACWPC Player of the Year for the second time in her career earlier this week. A four-time ACWPC All-American, Fischer qualified for the first team three times (2022, 2019, 2018) and the second team in 2017.

Fischer was named the NCAA Most Valuable Player after guiding Stanford to its eighth national title in school history and first since 2019 with a 10-7 win over USC back on May 8. An All-MPSF first-team selection for the third straight season and fourth overall, Fischer led the Cardinal in goals (83), assists (47), points (130) and shots (167) while producing 23 multi-goal games.

A two-time Olympic gold medalist and three-time NCAA team champion, Fischer became the Cardinal’s all-time leading scorer in a win over USC on Feb. 26, surpassing the 239 mark achieved by Seidemann and Lauren Silver. Fischer closed out her career on The Farm with 288 career goals, which also ranks third all-time in MPSF history.

A two-time CoSIDA Academic All-American in 2018 and 2019, Fischer is once again on track for a third award after being named an all-district selection two weeks ago. Equally impressive in the classroom, Fischer was the Cardinal’s NCAA Elite 90 Award nominee in 2022, boasting a 3.96 undergraduate GPA within the NCAA’s 4.0 scale of calculations. A three-time MPSF All-Academic Team honoree, Fischer is also carrying a 4.0 graduate GPA in mechanical engineering.

For her capstone project, Fischer helped design a hexagonal roof for modular refugee housing. Working with an organization that sought to create more dignified living conditions for Syrian refugees in Jordan, Fischer’s group was tasked with creating a roof that could be interconnected to accommodate additional family members and easily shipped and assembled.

Established in 1999 by The Olympic Club, the Peter J. Cutino Award is given annually to the top men’s and women’s NCAA Division I water polo players as voted on by coaches from across the country. The namesake of the award is a legend in United States water polo history, with eight NCAA titles as head coach at Cal. The Olympic Club has a long and distinguished competitive water polo history, a tradition that continues today in the pool with some of the best age-group teams in the world.

Cal All-American center Nikolaos Papanikolaou has been named the 2021-22 winner of the prestigious Peter J. Cutino Award, given annually to the top male and female player in NCAA water polo.

The award caps off a brilliant junior year for Papanikolaou, who was also named the ACWPC National Player of the Year and led the Golden Bears to the 2021 NCAA championship.

“It’s a great honor for me to be the Cutino Award winner,” Papanikolaou said. “I want to congratulate Nicolas Saveljic and Nic Porter for their nominations. They both were incredible this past season and it was really fun competing against them.”

Papanikolaou becomes the fourth Cal player ever to win the Cutino Award, joining John Mann in 2006, Ivan Rackov in 2010 and Luca Cupido in 2017.

The award holds extra significance whenever a Cal player wins it because it is named after legendary Golden Bears head coach Pete Cutino, who led Cal to eight national titles during a 26-year career. Cutino is the program’s all-time winningest coach with 519 victories.

“For all Old Blues, this award is very special,” Cal head coach Kirk Everist said. “Pete made such an impact on so many lives and the sport we all love. Having a Bear honored in his name is a great honor and we are so happy for Papa and the team for achieving this award together.”

Papanikolaou was arguably the most dominant force in the college game last season. He led the MPSF with 68 goals and 35 steals while registering a staggering 112 earned exclusions. Papanikolaou was also a finalist for the Cutino Award last season and has been named the MPSF Player of the Year in each of the past two seasons.

“Papa had an incredible season and this award is well-deserved,” Everist said. “We are looking forward to the next couple years with him on our side.”

Papanikolaou has two years of eligibility remaining and leads a strong nucleus of returners that will seek to repeat as NCAA champions in 2022.