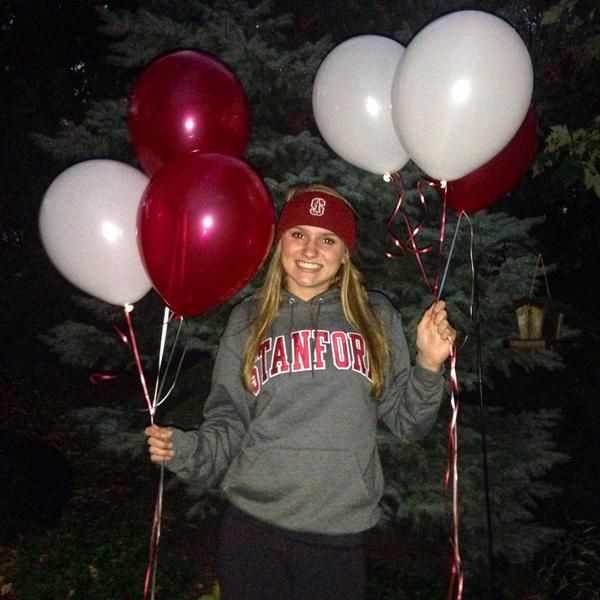 Stanford has bolstered its recruiting class with an elite blue-chipper, getting a verbal commitment from Wisconsin's Katie Drabot. Current photo via Katie Drabot on Twitter

Stanford has bolstered its recruiting class with an elite blue-chipper, getting a verbal commitment from Wisconsin’s Katie Drabot.

Drabot checked in at #6 on our list of top recruits in the nation, though we noted at the time a case could certainly be made to rank her even higher. Drabot was a member of the U.S. squad for the 2014 Short Course World Championships, is a former Junior World Record-holder and is a current member of the U.S. Junior National Team.

Swimming for Ozaukee Aquatics and Cedarburg High School in Wisconsin, Drabot is a veritable dream recruit for coaches with her extreme versatility and NCAA-scoring range times.

Take your pick on which of those times is most impressive. Odds are, Drabot will end up swimming a little of everything over the course of her college career. Stanford’s relative wealth of young talent means Drabot should have the flexibility to swim where she shows the most spark, rather than being forced into an event discipline the team is weak in.

Those IM times would make her a great training partner for former Junior World Record-holder Ella Eastin, who is a current freshman with the Cardinal. Drabot would probably benefit from training her 100 and 200 frees with NCA sprint champ Simone Manuel, currently a sophomore. Then, too, there probably isn’t a better distance freestyle training partner in the world than Katie Ledecky, who will arrive at Stanford next fall along with Drabot after deferring her enrollment a year.

Looking at that list of names really drives home the kind of insane talent pool Stanford has been able to assemble over the past few years. With Drabot joining fellow top-20 recruits Erin Voss (#11) and Megan Byrnes (#14) in this class, it looks like the talent influx is only going to continue for the Cardinal.

I’m quite impressed with Greg’s recruiting, but I must ask how many scholarships he can offer, especially with Ledecky showing up on campus. Although I wished she would have chosen Georgia as she’s similar to a Melanie Margalis/Hali Flickenger swimmer or Virginia to train with Leah Smith. Nonetheless, good get on Stanford’s part!

Stanford is a private school so they might have more ‘academic’ scholarships for some of their swimmers that don’t count towards their swimming scholarships.
It looks like a 2 team race in the near future at NCAA’s….Stanford and Cal.

Dang! Stanford is going to be tuff next year!