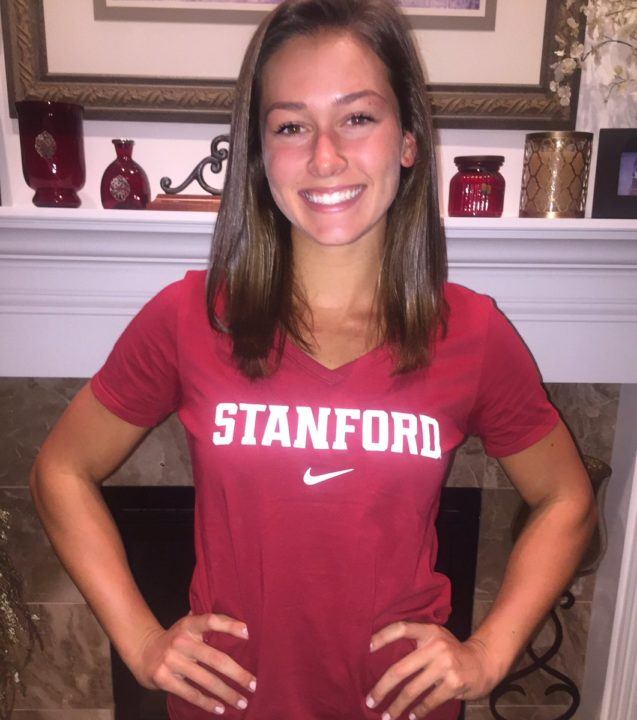 The queens of recruiting the past few seasons, Stanford was having a quiet fall of 2016 - that is, until tonight when the team nabbed 2 of the top 20 recruits nationwide, with #12 Ashley Volpenhein joining #4 Brooke Forde, on whom we reported earlier tonight. Current photo via Ashley Volpenhein on Twitter

Stanford, the queen of recruiting over the past few seasons, was having a quiet fall of 2016 – that is, until tonight when the team nabbed 2 of the top 20 recruits nationwide, with #12 Ashley Volpenhein joining #4 Brooke Forde, on whom we reported earlier tonight.

Volpenhein, who is based out of Ohio, tweeted to announce her verbal commitment on Monday night:

So excited to announce my commitment to swim at Stanford! I can't wait to be a part of such amazing athletics and academics! Go card!!❤️???? pic.twitter.com/TXO5kAj5ux

Volpenhein comes to Stanford out of Mason, Ohio, where she competes for the Mason Manta Rays and Mason High School.

Combined with Forde, a versatile mid-distance IMer out of Kentucky, Volpenhein gives Stanford a well-rounded early class. Volpenhein is arguably the best pure sprinter in her class:

She joins a loaded Stanford sprint group, and for at least her freshman season will likely get to train alongside Olympic gold medalist Simone Manuel, who is currently listed as a junior on the Stanford roster but could have up to three more seasons left after a redshirt sophomore year.

Already on the cusp of a 21-second 50 free, Volpenhein will allow Stanford to immediately reload its relays after another Olympian, Lia Neal, graduates this coming spring. Volpenhein is set to join the Cardinal program in the fall of 2017.

Stanford has absolutely crushed recruiting the past few seasons, and tonight’s dual pickups should immediately put Stanford inside at least the top 10 recruiting classes nationally.

With Forde and Volpenhein making commitments tonight,  only 6 of our top 20 recruits are left on the board. Stanford does still have an “in” with #10 Grace Zhao, who is from Palo Alto and competes for Stanford’s companion club, Palo Alto Stanford Aquatics.

Isn’t Manual currently a sophomore because she redshirted last year?