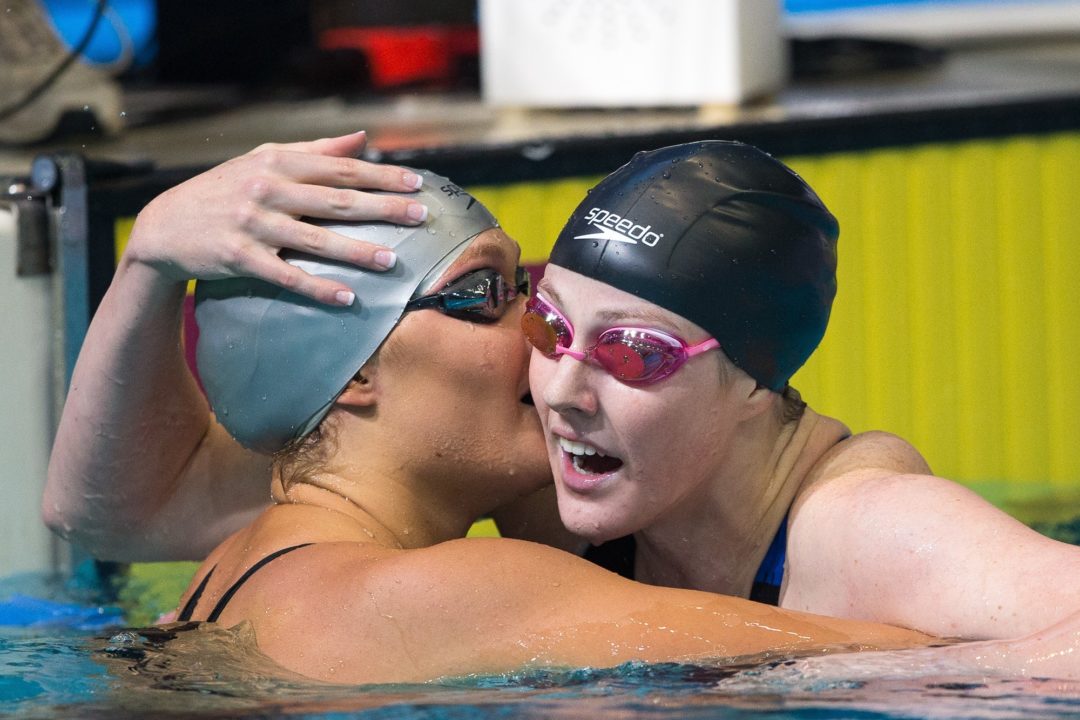 Style vs. Substance. Personality vs. Performance. Form vs. Function.

Is this where the gator-skin print comes in? How about the gold-leaf Trojan, maize-and-blue wings or body-armor print? And does it have to be either/or?

Not according to Speedo USA, which unveiled a partnership with four of the nation’s top collegiate swimming programs – USC, The University of California-Berkeley, the University of Florida and the University of Michigan – to create custom team suits that emphasize the personality and heritage of each school.

The collections consist of two women’s thin-strap suits and two men’s briefs and will be worn during the 2013-14 collegiate swimming season. The goal was to not only keep the high-performance racing technology the company is known for; the suits are made from SPEEDO’s new, NCAA-approved Power Plus fabric, but to infuse each suit with the individual tradition inherent in each school. In essence, the suits become the true team uniforms they are.

After all, if you’re swimming for the University of Michigan, why shouldn’t you hit the water in a maize-and-blue suit – complete with the iconic winged design synonymous with the helmets of your school’s football team?

If you’re Florida Head Men’s Coach and Speedo Advisory Coach Gregg Troy, who guided the U.S. Men’s Olympic Team to 16 medals in the 2012 London Games, or Women’s Assistant Coach Leah Martindale-Stancil, isn’t it natural to outfit your swimmers in a suit featuring a gator-skin print?

If you’re one of USC Coach and Speedo Advisory Coach David Salo’s swimmers, doesn’t it make sense for you to make concrete progress in the water in a suit featuring an abstract graphic of USC’s Trojan mascot in gold foil?

And if you’re Cal Women’s Coach Teri McKeever, who served as the U.S. Olympic Women’s Swim Team coach for the 2012 Games, where do you go design-wise? How about a body-armor-inspired blue-and-gold suit?

“As proud sponsors of these four teams – and many more – we have always outfitted out collegiate programs in the best technology Speedo has to offer, from racing suits to equipment and on-deck team apparel,” said Kate Wilson, Speedo USA’s Director of Performance. “Now, for the Trojans, Gators, Wolverines and Bears, we’ve taken the design process a step further to develop custom swimsuit styles that celebrate each team’s heritage – and to change the notion of what a dual meet suit is ‘supposed’ to look like.”

What is a dual meet suit supposed to look like?

At USC, Salo and Assistant Coach Catherine Vogt answered that question with two suits: one a custom print with “Trojans” repeated in an engineered design and the second being the aforementioned abstract graphic of USC’s mascot in gold foil superimposed on a charcoal gray background.

At Florida, the answer took on two distinct elements: one of which is surprising. The first is a bright turquoise suit with splashes of white and orange. Those color splashes, you expect from Florida. But Martindale-Stancil and several of her swimmers who helped with the design process opted for turquoise instead of the school’s traditional royal blue.

You’ve heard of alligator shoes and alligator belts? For Florida’s second suit, meet the alligator print. The school honored its Gator mascot with a black gator-skin print suit that has the school’s colors spliced throughout.

At Michigan, Head Coach and Speedo Advisory Coach Mike Bottom and his team answered the question on what a dual meet suit is supposed to look like by paying homage to the school’s rich tradition and iconic logos. They went “old-school” with one suit sporting the school’s Maize-and-Blue colors and Block M logo and the other featuring the classic winged design associated with the UM football team.

And at Cal, McKeever and members of her women’s team wanted to focus on the core values of being a Cal Bear, which means honoring tradition, being bold and celebrating uniqueness and creativity.  The Bears believe that wearing a suit from the University of California is a badge of honor, so they wanted to create suits that emphasized that feeling of pride.

Toward that end, McKeever and her swimmers went with two blue-and-gold suits that were inspired by body armor, thus giving her swimmers a sense of invincibility standing on the blocks.

“These new uniforms are a true mix of fashion, form and function for our elite college swimmers,” Said Speedo USA President Jim Gerson.

A mix of fashion, form AND function that given the success of these four programs, means gator-skin, wings, Trojan  silhouettes and blue-and-gold body armor are likely to be only the first wave of performance, personality, style AND substance hitting the water at a university near you.

Those sound super cool! When do we get to see them?

Teri’s team has already had two new suits this season: the sparkly one and the ribbed one (which sounds like the body armor version). Are they going to have a third suit this season? Hopefully it will be one that creates fast breaststrokers and distance swimmers.

I was hoping at the bottom, it was going to say if you have a team that would like a custom suit to contact them…Bummer!